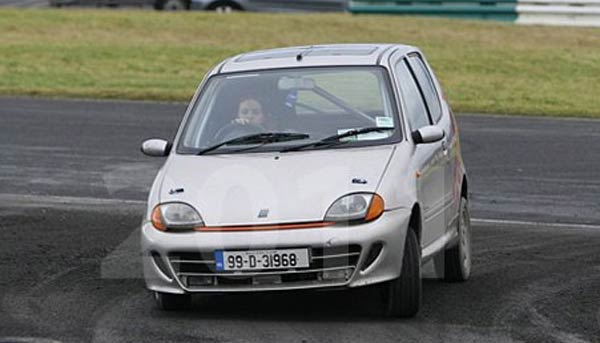 What was your first car and why did you buy it? My first car was a 1.1 silver Fiat Seicento Sporting and my dad got it for me to get me started on the road. I also did some autotesting in it!

What did you pay for it? Originally the car cost about €500. When we bought it, my dad fully kitted it out in race gear! Roll cage, bucket seats, race harness, the whole lot!

How did it change your life? I felt great having my own little car to drive around and not have to rely on people for lifts anymore. Although with the roll cage it meant you couldn’t have people in the back seats (unless they climbed through the boot, as my friends discovered)

What was the longest trip you ever took in the car? My longest trip in the car was from Dublin to Anglesey in Wales. I was racing over there and we needed an extra car to use for going to the shop from the circuit so I was let drive over and had my first experience driving on a ferry!

What was your best memory or most memorable moment in the car? This trip was one of the most memorable ones in my little Seicento but wasn’t all good. On the second last day over there the engine seized from a water leak that had been ongoing an so my car was put in the truck to be brought home…
Whilst the trip in Wales was one of the worst times the car had, it’s times in Mondello were the best. I used it to compete in many autotests as part of the cento challenge. I also remember a day when two friends of mine, famed for steeling people’s keys around Mondello paddock, got hold of my keys and tested out the Seicentos start line speed against a Junior Rallycross Micra in the middle of the paddock! I was proud to say they were equal enough!

How long did you keep your first car? I kept my car for eight months as I moved up into a 1.6 fiat stilo once I passed my driving test.