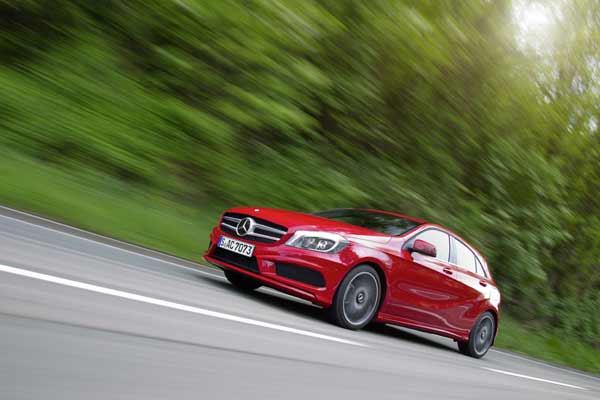 According to Mercedes-Benz “The new A-Class is the pulse of a new generation”,

Prices have just been announced for the stunning Mercedes Benz A-Class. With an aggressive stance and heavily sculpted bodywork this is one hatchback that will stand out.

Due here in December prices sit in the €26,435 to €28,550 bracket and there’s a choice of three specifications and equipment lines – Style Pack, Urban Pack and Sports Pack. Two engines are available a petrol  A180 version and an A180 CDI diesel version.

As different from its predecessor as it is possible to be, the new A-Class sits some 18cm closer to the ground – a lower-slung posture that gives it a distinctly sporty, youthful appearance. Built on the B-Class platform, it’s on board high-tech functionality is such that iPhone Siri voice-activated units and iPad music and Apps can be played through the car’s infotainment system.

Safety is always a priority for Mercedes-Benz and the new A-Class is no exception. In addition to ESP, Active Bonnet and Adaptive Brake with hold function and Hill-Start Assist, standard specification includes the radar-based Collision Prevention Assist which acts to reduce collisions by alerting the driver to possible risks through visual and acoustic warnings if it senses an accident is likely to happen. It also primes the Brake Assist function to ensure maximum stopping power as soon as the driver touches the brake pedal and functions from speeds of 30km.

All engines offer an idle-stop system as standard, linked to a six-speed manual or seven-speed dual-clutch automatic transmission.

Fixed Price Service plus Full Vehicle Health Check for only €179