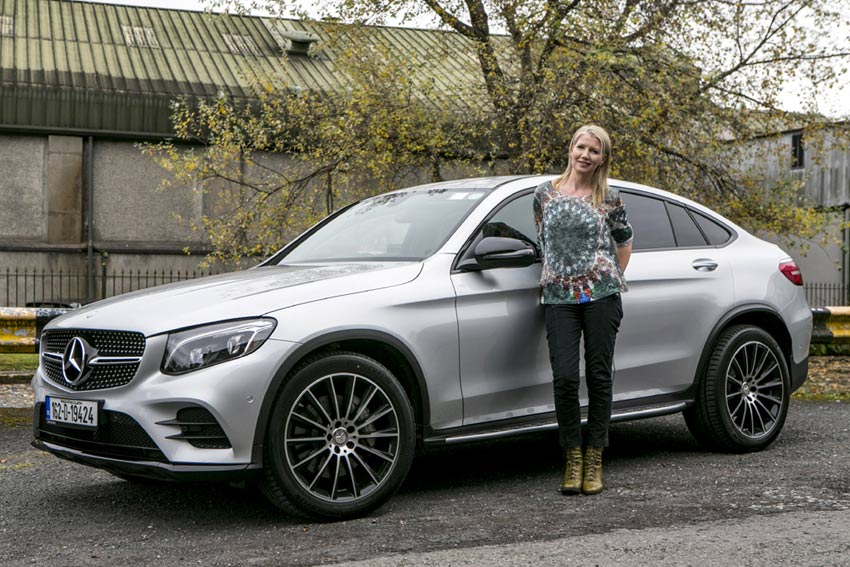 Geraldine Herbert with the GLC Coupe.
Pic by Kyran O’Brien

What is it?  When BMW launched the X6, they proved that they could create a demand for something we never knew we wanted.  Motoring critics may have been baffled by the very idea of an SUV coupe but BMW showrooms worldwide have resonated with the footsteps of eager customers. Today the crossover coupe is a must-have in any premium range. The latest in the Mercedes-Benz line-up is a sloping roof coupe version of the GLC SUV

Who is it aimed at? The GLC is designed to appeal those who are not in the conventional four-wheel-drive market and yearn for a combination of style and sporty driving dynamics.

Styling? With a diamond radiator grille, short rear overhang, and swooping roofline, it certainly has road presence and rivals the likes of BMW’s X4 and Jaguar’s F-Pace.

Under the Bonnet? Powering my 220d test car was the 2.1-litre diesel version – and the refinement is particularly impressive. Sitting at the very top of the GLC Coupe range are the Mercedes-AMG GLC 43 and GLC 63. The 43 refers to a 3.0-litre twin-turbo V6 engine that has been used in numerous AMG Performance models. It delivers 270kW (367hp) plus maximum torque of 520nm. The 63 comes with the 4.0-litre twin-turbo V8. Both versions come with price tags in excess of €100,000.

What about inside? Inside, the GLC is an oasis of opulence and comfort. The finish and quality of the fittings are impressively tactile and beautifully crafted – particularly the dashboard and centre console. The five-seat coupe is also almost eight centimetres longer and four centimetres lower than the regular GLC, with good leg room in the back for two adults. However, the sloping roofline means headroom is a little tight and the boot space is smaller than the GLC SUV’s 550 litres, but it does offer a decent 491 litres that can extend to 1,400 if you fold the rear seats. The boot is quite narrow, though, and the load lip is high, so its usefulness is slightly compromised.

On the Road? There was plenty of oomph from my 220d’s engine and it goes from 0-100km/h in 8.3 seconds, with a top speed of 210km. It has 170bhp and 400nm of torque and the nine-speed automatic gearbox is impressively smooth. The biggest issue is the lifeless steering so while it is a good car to drive, it is not quite a match dynamically for the BMW X4.

Reassuringly, it comes with 4MATIC permanent all-wheel drive. You can also opt for one of six settings (Eco, Comfort, Sport, Sport Plus, and Individual), opt for the Sport mode to improve the steering and sharpen the car. There is also the option of an Offroad setting and Offroad Plus for all-wheel variants.

And safety? Mercedes-Benz makes safety a key component in all its vehicles – and the new GLC Coupe is no exception. There is also a host of crash-avoidance features, which are now common across the Mercedes-Benz range, and there is a huge selection of optional features. The GLC is also equipped with an active bonnet that is raised by 80mm during an impact to provide additional deformation space and protect pedestrians.

What are my options? There are two trim levels to choose from, with the entry-level model coming equipped with active park assist, air conditioning, an AMG interior pack, collision prevention assistant, satnav, heated front seats, intelligent light system, keyless start and touchpad control for the infotainment system. The interior ash trim and metallic paint are among some of the extras that add €6,182 to the base price of my test car.

Will it break the bank? Fuel economy is an average of 5.4 litres per 100km, or 52mpg on a mix of motorway and city driving while emissions of 143g/km means annual motor tax €390.  The closest rivals to the Coupe are the Jaguar F-Pace and the BMW X4. Prices start at €65,435 and my test car with options came in at €72,304. By comparison, the X4 starts at €58,380 and the Jaguar F-Pace at €44,100. However, Mercedes-Benz Ireland recently announced a 10% reduction in the price of its passenger cars for a limited period, so the test car with options is currently priced at €65,074.

Verdict? The GLC is expensive, particularly when compared to the GLC SUV. With less practicality and a higher price tag than the SUV version, the coupe is a compromise and there are many arguments against buying one. But reason doesn’t always prevail and the lure of this sleek coupe is, despite these failings, a strong one. The GLC Coupe successfully blends style and refinement with some of the benefits of an SUV. It is a niche model within a niche segment of the market, so this vehicle won’t be to everyone’s taste or suit everyone’s budget, but that’s exactly what Mercedes-Benz intended.

Why you won’t? Not as sporty as it looks; Pricey