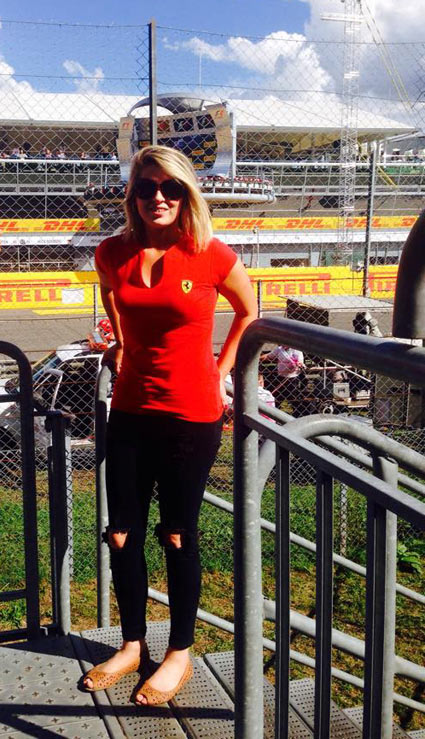 Diamonds are a girl’s best friend? Or are they asks Aimee Woods

I think not, most certainly not. When one’s birthday is looming it becomes inevitable that you will be asked (repeatedly) that awkward, unanswerable question; “What would you like for your birthday?” Perhaps I’m a little childish, but it’s likely that my brain knows exactly what I’d like for my birthday. Alas, this is one scenario where I am the definition of an Irish female and politely reply “Oh, you don’t have to get me anything, don’t be spending your money”. As if. Yes, this is the time of year when all of you other-halves absolutely must possess those elusive mindreading superpowers that we hear so much about.

This year, I was confronted by my puzzled, panicked and utterly lost looking man begging to give him some hint of what would be an acceptable present for my birthday last June bearing in mind that being feminine isn’t my biggest strength. I’m sure many of the readers of wheelsforwomen.ie can empathise that we’re probably not the easiest bunch to buy for. We don’t have expensive taste, unrealistic expectations or are even that fussy but we’d probably prefer a day out at a race track, a rock gig or even a bit of paint-balling over relaxing in a spa (unless it’s Spa-Francorchamps, of course). I’m aware it’s not the socially acceptable thing to do, but he looked so desperate and confused that I responded with what my heart genuinely wanted – shiny new racing tyres. No flowers or diamonds rings, just four rings of rubber please.

I must admit, I love being in a relationship where he has no idea about race cars, tracks, tyres, engines or anything in the related field as I do feel a little superior at times. Although I really did want those tyres, I couldn’t exactly push someone to buy them for the price of a holiday. The morning of the birthday arrives and I didn’t even think about what he might have settled upon. Jewellery? A voucher? A handbag? Nope, he bought me Monza tickets. Yes – that would be tickets to the Italian Grand Prix, my first ever outing to a grand prix and one of my childhood dreams at the renowned Monza circuit. Not just any tickets either; these were Thursday to Sunday tickets for the main straight, right where the action kicks off and directly opposite the pit lane. The boy did good.

To my dismay, work commitments meant that we were unable to travel over on the Thursday for the walk of the track/pit lane and the chance of doing some driver spotting. I was quite happy to be travelling on an early flight over to Milan in time for practice on the Friday. Unfortunately, this early flight was exactly the problem as I have a slight tendency to be overly excitable. This manifested in to my refusal to go to bed on the Thursday night because I just couldn’t wait to get going. Arriving in Linate airport in Milan at 11am, we managed to find a bus that could drop us directly to Milano Centrale, the central train station. Our hotel was located right beside it and we figured that this would be a better resting stop than right in the city centre.

From Milano Centrale, you can travel directly to the circuit by train and use the metro lines to get to any other area of the city if you’re planning on doing a bit of sightseeing. I’d like to think I had done my research before leaving but by the time we had checked in to the hotel, figured out the train lines and grabbed lunch on the go, practice was almost over. As much as I adore Italy, the food, the weather and the architecture, the people can leave a lot to be desired. From the central station it was impossible to tell that just a 20 minute train journey away was probably the biggest event of the year in Italian motorsport, for Monza at the very least. There are no sign-posts, banners, tourist information points or even fans to be found on the Friday. I may not be the most popular person for admitting to this, but I actually find practice can be a bit of a snore anyway. I was satisfied that I had at least figured out the transport links in time for qualifying. There were also a flurry of cocktail bars and an all-you-can-eat Chinese restaurant (which also had Italian food and Sushi) for a very modest price (including wine) right around the corner from the station. Despite the Friday’s mishaps, Milan did not disappoint. 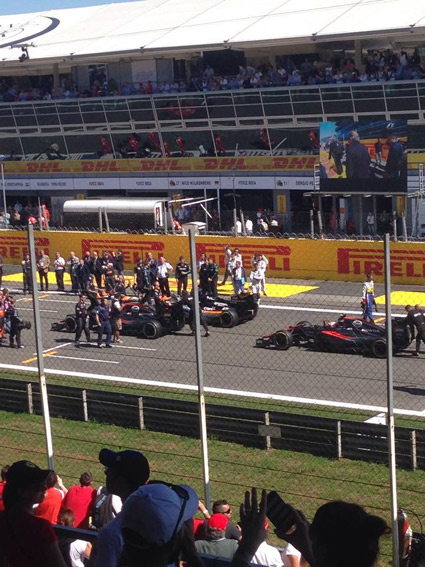 Saturday morning arrived and we were quite lucky with the later qualifying start time at 2pm. Considering that the Italians would fall over if they were any more laid back, we found this unsurprising. Making our way to the station around 10.30am, we made our way to Monza station and were brought on a shuttle bus (four euro return) to the track. Do not be under any illusions; this brings you to the park surrounding the track. There is at least another twenty minute walk ahead on a dusty path. Note to all ladies and gentleman, I thought I’d quite like to be a bit stylish, it is Milan after all. Consider this your warning, jeans/shorts and runners with the team t-shirt is the going fashion on a race weekend.

Entering the track is an instant buzz. We were met with the official programme stall, the F1 merchandise village, a gaming zone, over-priced food stalls, a shrine to all of the F1 champions and a sea of red – Ferrari fans. There was also a beautiful memorial to Jules Bianchi amidst the excitement. After I had tortured himself to buy half of the F1 shop, I finally settled in to our seats in my newly purchased Ferrari t-shirt. Although there appeared to be thousands of people around, the stands appeared relatively empty and once you were in your designated area, it was easy to move up even closer to the track. We were sat directly across from Kimi Raikkonen and Sebastian Vettel’s garage and had quite the view in to the Williams garage also. Handy tip: bring binoculars. The stalking potential is fabulous. Mercedes were one of the first to leave the garage but I had my eyes firmly kept on the Ferrari garages. I have been known to pick and choose a different team every year for supporting, but my favourite driver of all time has to be Kimi and as irony would have it, Vettel has never had any appeal to me. Regardless, my heart lay with the fans and my god we cheered when those beautiful red machines departed from the garages. This cheering did not falter throughout Q1, Q2 and Q3. Honestly, despite where your loyalties lie, jump on the Ferrari band-wagon in Monza and the atmosphere will not disappoint. Landing a second and third in qualifying added to the madness in the crowd and it genuinely felt like we were in a little world of our own. There appeared to be a significant Williams following also, presumably for Massa and their success added to the electricity.

The noise? I’m surprised at myself for saying this, but it was incredible! I was disappointed that the engines had dulled significantly, but it actually meant you can hear the crowd and at times, the commentating. Besides, watching the GP2 and GP3 classes following qualifying meant that you could hear the more authentic engine sound, if that’s what you want to hear.

As Sunday arrived I felt ill with excitement and the fact that Ferrari had just achieved their best qualifying result of the year. Today could have made history for Kimi. I can’t lie, I wasn’t all too bothered about Vettel but he’d have to do should Kimi have a mishap, I felt confident that he wouldn’t. Not to harp on like a travel guide, but even on race day, transport was terrible with little help from officials. Finally settling in our seats, I couldn’t believe I was so close to all of the teams on the grid getting ready for the start. The crowd was incredible during the warm up lap, but everyone could feel the tension in the air, willing Kimi to make a killer start. Once the grid girls and teams had rushed of the track, we watched those lights in sheer anticipation. Lights out, no sign of life from Kimi. It felt like he was on that start line for an hour. Fans screamed out in utter frustration. The entire race was then consumed by wishing for a miracle. Without that miracle, attentions turned to Vettel. As a slightly uneventful race in general, when Rosberg’s engine burst in to flames there was a huge sigh (cheer) of relief. As Vettel finished second, it was the first time you could see that he really earned that podium and the fans were in the palm of his hand. I have never witnessed anything like the crowds that poured on to the track to see him raise the second place trophy. It really was an experience of a life time. I must have been the last to leave the track as I was devsated that it was over. Ladies and gentlemen alike, do not deny yourselves the pleasure of a Formula One experience, you won’t regret it.

Maserati – Luxury and Performance with Style