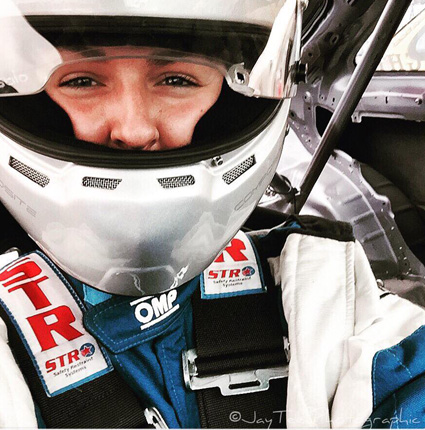 Irish Touring Car racer Nicole Drought was invited to Mondello Park recently to test a SEAT Supercup Ireland machine. Fresh from her Motorsport Ireland/Ireland Sports Council Interview, having been the first ever woman to be nominated for the prestigious Young Driver Of The Year Award, Nicole travelled to Mondello Park to meet the series organisers and championship winning team Murray Motorsport.
Having been given a run down on the controls of the SEAT Supercopa, she took to the track for a number of shakedown laps before returning to the track for a series of high speed laps.

Nicole Drought: “That was amazing, the car feels like a proper Touring Car. I was first out and the track was greasy so I ran on full wets but I still got a feel for the car. I didn’t want to come back in, it felt amazing. I would love another run on slicks to see what it can really do! I would like to thank Oisin and the guys from the SEAT Supercup Ireland, SEAT Ireland and Murray Motorsport for a wonderful experience.”

Oisin O’Briain, SEAT Supercup Ireland Championship Manager: “‘It was great to be able to give Nicole the opportunity to test the race winner Supervalu backed SEAT Supercopa and even though 2015 was her first year racing she quickly got to grips with the SEAT’s 300bhp, which is a big step up from what she raced in the ITCC Production class this year.  Nicole’s test generated a huge amount of interest and she has been very professional to work with.  Together with SEAT Ireland we will be working closely with Nicole to try put things in place for her to contest the 12 round 2016 SEAT Supercup Ireland championship.’