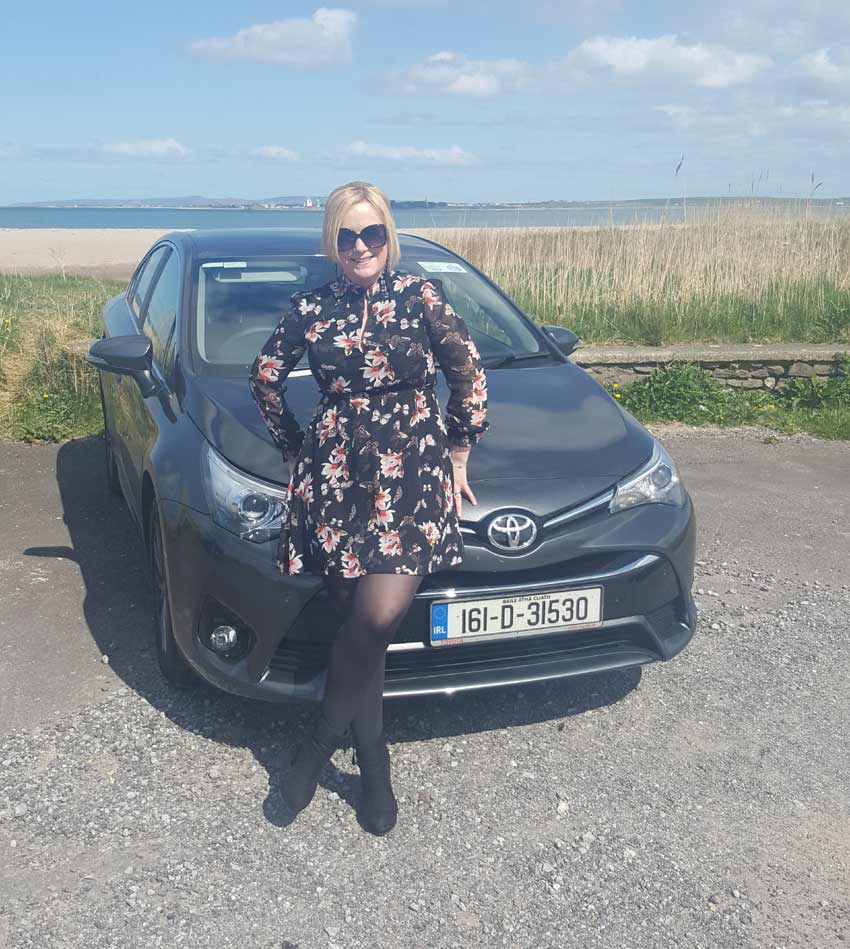 This weekend I was setting off on a mini break which was going to take me to Kerry, then onto Wicklow and finally stopping in Donegal. I thought to myself, “What car is going to make sure I’m as comfy as possible with all that driving, most of it on good old bumpy Irish roads”? Enter – Toyota and the brand new Avensis.

It’s always such a pleasure popping out to Toyota HQ on Kileen Road and having the lols with the staff before striding off into the car park to pick up my new baby for the week. I’ve previously driven the cute little Aygo, the long-time favourite Yaris, and the new Auris hybrid. So what was the Avensis going to bring to the table to make it stand out from all the rest?

First look – Ash grey, executive type car / slash posh mummy car. Since becoming a mom I look at the practicalities of a car. I sit in and the first thing that impressed me was the spacious interior. From the front to the back you get a sense of comfort that you will never feel cramped in this vehicle. I had Farah’s car seat installed and this still left more than enough room for 2 more passengers in the back. Even the passenger seat, which now had the baby seat behind it, could easily accommodate my husband Frank who stands at over 6 feet tall. Taking a stroll around to the back of the car to the boot and this was a huge box ticker for me. It easily took Farah’s McLaren buggy (use of manufacturer name because it’s the bulky Techno XT and takes up quite a bit of space). Couple this with her toys, Franks numerous work bags and there is still mountains of space for a week’s shopping.

I was surprised when I sat in and the first thing that struck me was no handbrake handle. After a few minutes of searching I found the very fancy electronic handbrake button. Once I realised it was a park, auto-start feature, which automatically releases the handbrake as you take off, it actually made things a lot easier for the drive, especially those dreaded hill starts.

Sitting in the driver’s seat you feel that you are in a safe place. Everything feels solid, well put together and you feel as if there was no corners cut in the designing of this car. Apart from the steering wheel feeing slightly cluttered with buttons, everything else felt very ergonomic, exactly where it should be.

Going on my trip from the city to the country, I felt a huge difference in the steering. In the city, it’s very light and very effortless to manoeuvre. Once I took it out onto the open road, the steering became a lot sportier. I felt very connected to the road. I could feel every curve and bump but not to the point that it made me feel uncomfortable. It gave me a lot of confidence on the windy and unpredictable country roads. Where I would normally want to pull back and play it safe, I found myself looking forward to each and every bend in the road with a smile on my face. To sum it up, I knew that wherever I pointed the Avensis………..it would go.

For me a disappointing element of the Avensis was the sound system. To hear the radio at a normal level you need to have it up quite high. The sound quality I would say is weak at best and me being a DJ, this is not something I’d compromise on. It just feels it could definitely do with more ‘oomph’. As I get lost almost every day the lack of Sat Nav as standard disappointed me a little. For a car of this calibre and price, I would have liked for it not be an added extra. The 1.6L petrol engine in this car was very smooth in around the city and provided more than enough poke in the lower gears. Unfortunately this was not the same when I took it out onto the open road. I found I was constantly dropping down in the gears to try and get and response from the engine and on any overtaking opportunity I just didn’t feel that I had enough power under me to give that confidence.

To sum up – it looks like you’re a mom who has style, savvy and security top of her mind and doesn’t mind a bit of sport when the kids are otherwise occupied. I would have no problem in recommending this car but if you’re going to be hitting the open roads regularly, maybe opt for a bigger engine as the 1.6L just didn’t tick the box.

For me, with a few added extras and a bit more poke, it’s definitely a winner in my book.