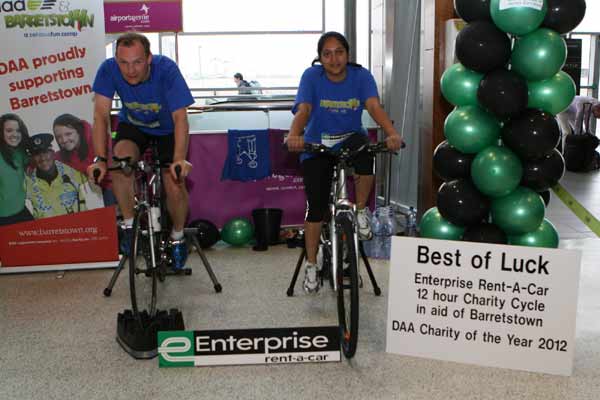 Staff at Enterprise Rent-A-Car, Dublin Airport Team turned to pedal power in a charity effort to raise money for Barretstown. A team of 4 cyclists geared up for the challenge and cycled in relays for 12 hours from 6am to 6pm to raise much needed funds for the children’s charity.

The team consisting of Shauna Murphy, Ross Culligan, John Colgan and Trevor Yeomans were helped by people working in Dublin airport during their break times and in total 11 people took part in the cycle – cycling over 400 miles. Through their hard work €1,200 was successfully raised for Barretstown, with more donations still due in.

George O’Connor, Managing Director of Enterprise Rent-A-Car, Ireland, said “I was delighted to be part of this charity event and I want to especially thank our management trainees who organised this charity cycle. Having my own children, I was particularly delighted that they chose Barretstown as the charity that would benefit. I also wanted to participate myself, to help the team raise money to bring more families and children affected by serious illness to Barretstown.”

Barretstown is a specially designed camp that provides therapeutic recreation programmes for children with serious illnesses and their families. Barretstown was founded by Hollywood Actor Paul Newman in 1994 to serve children affected by serious illnesses – primarily cancer and serious blood diseases. Barretstown mission is to rebuild the lives of these children and their families. Barretstown offers its services free of charge so it relies heavily on charity donations such as this 12 hour cycle. It costs almost €5 million per year to run the programmes at Barretstown. This covers travel costs, accommodation, food, medical care and activities.