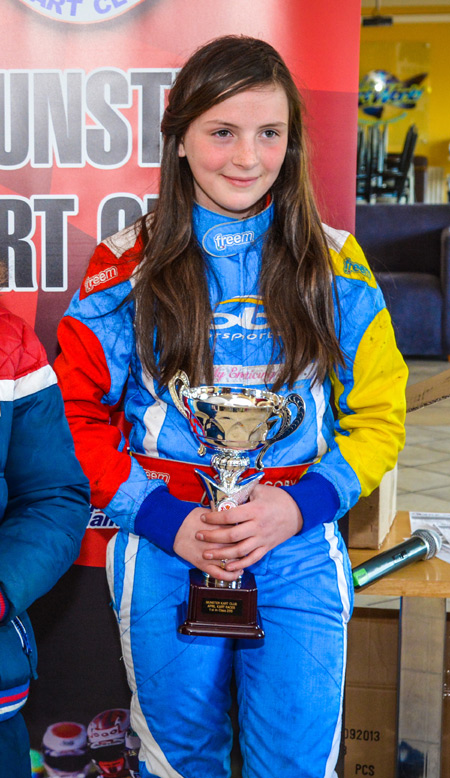 We catch up with 10-year-old Alyx Coby, a young kart racer from Newbridge, Co. Kildare, who wants to make it all the way to the top

Ten year old Alyx Coby is youngest of the Coby family to enter the competitive world of motorsport. Alyx first started racing in 2013, aged 8, in the Cadet class of Motorsport Ireland’s karting championship. These karts run with a 60cc 2 stroke Comer pull start engine with a top speed of around 95km/h.  In her first year Alyx won two novice class races, and followed that up with a heat win in her second season. Now in her third season, Alyx has started to be a force to be reckoned with, securing three final wins out of the first eight races of the season and sits in second place in the Championship, just five points behind the leader.

What age what you when you started racing and what attracted you to it?
I started kart racing in Cadets when I was 8. My dad, Gary, used to race karts and my uncle Aaron still does. I grew up spending weekends in the paddock with our family’s race team, Coby Motorsport, so I was bound to end up behind the wheel at some stage.

Are you treated any different as a girl?
At my first race there were loads of boys and only one other girl in my class, but I didn’t let the boys intimidate me. Most of my friends are boys so I’m used to dealing with them! At the beginning the boys may have seen me as just a girl, but that just made me work harder to prove myself and I think I have done that now.

From your first race to your most recent, what have you learned from your time in the sport so far?
I have learned so much from my Dad and he inspires me to want to be as good as he was when he raced. He keeps telling me that there is always room to improve and always a tenth of a second to be found somewhere – that’s something he says A LOT!!

The days when things just don’t go right on track are the worst, but I always try to learn from the experience as much as possible and use them to make me a better driver. Winning my first championship final last month, and knowing that I am the first girl to win in the Cadet class in Ireland, has given me so much more confidence. I now know that I have what it takes to win, but I also know that there is still a lot to learn if I want to succeed.

One of the things I love about race weekends is the time I get to spend with my dad and how close we have become through racing.

How far would you like to go in the sport?
After spending practically my whole life around karting and motorsport I know that, no matter what happens, racing is always going to be a huge part of my life. This is my final year in the cadet class before hopefully moving up to Minimax next year, so I would really love to go out on a high by winning the championship and I’m really looking forward to the challenge, but I know that it is going to take a lot of hard work to get there.

When I’m older I would love to race cars and who knows, maybe go all the way to F1, but for now karting is fast becoming all I think about and all I want to do is go out and race.

Catch me if you can…… Gabrielle McDonald