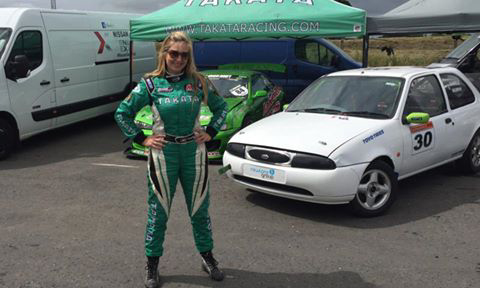 Well ladies, firstly let me apologise for my 9 weeks absence since my last blog! From travelling to Malta with only 10 hours notice to judge an event, to preparing for my first ever experience to give Rallycross a go this weekend in Mondello, it’s all been pretty much go, go, go.

To recap as briefly as possible over the past 9 weeks, so as not to give you a novel to read I shall start at 11pm one Thursday evening, to be told I would be on a flight leaving Dublin at 10.30am the next morning to travel to Malta! After my first experience in Sicily, Italy judging my first ever Drift event, I was a big success thankfully, and it now is something that will become more frequent outside of my own competitions.

On returning from Malta I had almost exactly 14 days until my next competition with the Irish Drift Championship, I have been planning for a while to refresh The Green Monster with a new bodykit and re-spray. I do this every year as Drift cars do get tatty with so much hardship on track. Not to do things by half, it was 8 days before my event in the famous Green Glens Arena in Millstreet, when I decided I would set myself the challenge to get my car completely made over. Now I understand a lot of you may not understand the amount of time that actually goes into preparing a car before paint, and then actually painting, this wasn’t a big enough challenge for me, I was on a mission to completely restyle the car from scratch, which meant we needed to make the rear arches 5 times to actually get the finished piece that is now on the car! It took almost 3 days alone just to get the two rear arches designed, moulded, made and fitted! In total we estimated roughly 550 man hours between 4 of us in 8 days working around the clock. For now I will show you a before and after photo, I will do a future feature to explain all of this process at a later date.

It was close but at exactly 12.45am on Saturday the 6th of June The Green Monster was loaded on the trailer outside Carvogue (The garage who painted the car for me) in North Dublin, I was to be at Millstreet no later than 7am to sign on and be ready for the drivers briefing. Challenge completed eh?! Not exactly! I thankfully had one of my oldest and best friends come from the UK to help me with this competition. I arrived home with just enough time to shower, pack a bag, try close my eyes for 30minutes, and be back on the road for 3am to start my journey to Kerry. My mam bullied me and actually told me I was not driving, to try sleep along the way, which I was very grateful for, as stubborn as I am, I knew I would hit a brick wall at some point.

The track was small, technical, tight and if you got it wrong you had some really nasty metal barriers to suck that car in and do serious damage. With only 1 practise lap before qualifying, and countless hours of work on my car, I was going to drive, but I was going to hold back, for the first time ever at an event, I genuinely was exhausted, surprisingly I had qualified into the Top 32 battles, out of over 80 male drivers! Battles came and that  “battle” switch in my head flicked into place. I won my first battle, for my second battle it drew level and we had to do a re-run, unfortunately I lost by one point in the re-run battle. Was I happy, yes! I was one of the few people to bring their car home as they arrived, considering the 8 rear clipping points against a barrier! Let alone valuable Championship points.

The Green Monster may be parked up safely but tomorrow sees me complete in a 1.2 Ford Fiesta, for a new Fiesta Rallycross class in Mondello.  No previous race experience in this type of car or track, sure all I can do is go out to aim for the best and know that potentially a lot of the guys won’t want to see me finish ahead of them on the grid!!! Battle mode enabled 🙂

July 4th see’s me back in Mondello with The Green Monster for round 3 of the Irish Drift Championship, possibly the biggest Drift event in Europe! I had a great result here last year & I am aiming for better this year in from of a big crowd.

I will be doing video diaries of the above two events so stay tuned 🙂 And if you are around, drop in to Mondello each weekend for what is sure to be the extreme in both spheres of Motorsport over 2 weekends and make sure you come over and say hello to me for some freebies 😉