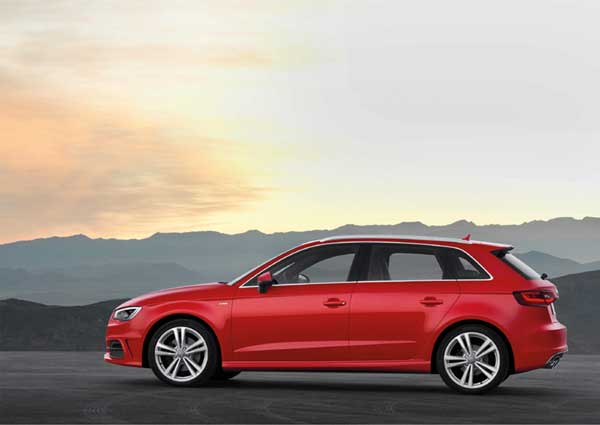 From concept to production, what you can expect to see at the Paris Motor Show 2012.

RS 5 cabriolet
The latest addition to the A5 line-up shares its 450hp 4.2 litre V8 engine with the two-year old coupe.

S3
Sporty version of the new A3 is expected to go on sale in the new year.

SQ5 TDI
The new top model in the Q5 model series is also the first S model in the history of Audi with a diesel engine.

BMW
3 Series GT
The Compact from 18 years ago didn’t really work, so the GT is longer and has a higher roofline than the standard 3. It is expected on sale in the first half of next year.

Concept Active Tourer
Showcasing BMW’s first ever front-wheel-drive platform, this five door hatch is part of a future entry level line-up which will also include a mini MPV to rival the B-Class.

Trax
It’s been seen as a concept, now the Trax has been confirmed for production at GM Korea alongside the Opel Mokka.

Citroën
C3 Picasso
It’s a bold new look for the Citroen’s popular MPV or ‘space box’ as the marque are calling it. The exterior revamp is matched with new upholstery, connectivity and other gadgets inside the cabin.

C4-L
The C4-L, a saloon variant of the C4 joins the C- Elysée as another compact executive for emerging markets.

C8 facelift
Still going after 10 years, the C8 gets a second, but minor, facelift.

C-Elysée
Citroën’s version of the Peugeot 301 will be built in Spain and is aimed at low-cost markets.

DS3 Cabrio
This pretty convertible with its canvas roof is due on sale next year.

DS3 Electrum
With technology that reportedly retains the current DS3’s performance and fun as well as a 75 mile zero emission range, the Electrum can be 80% charged in 30 minutes.

DS4 Pure Pearl
As the name suggests, this limited edition is finished in pearlescent white with more chrome and 18-inch wheels. Watch-strap club leather, integrated sat-nav and a HDi 160 engine with an automatic gearbox include other goodies.

Sandero
The budget brand’s new supermini offers a bolder, flashier presence than its conservative predecessor. Will this composure be echoed in the asking price?

Panda Trekking
Don’t confuse this with the 4×4 version- it is front-wheel drive but looks the part.

Ford
EcoSport
Ford’s crossover is scheduled to hit UK roads within the next 18 months and based on their B-segment platform.

Fiesta facelift
The refreshed Fiesta is part of Ford’s big product offensive. First updatesince the Fiesta made its debut at the Geneva show in 2008.

Mondeo
Another show debut, although already unveiled to the press. The Genk, Belgium-built Mondeo won’t arrive in the Ireland for another year.

Hyundai
i30 facelift
As with cousin cee’d, Hyundai’s new i30 three-door variant reflects a sleeker, sportier alternative to the popular hatch.

Jaguar
F-Type
The eagerly-awaited sports car make its debut in production form as a convertible. Jaguar describes the unveiling as a “truly significant day in its history.” Hard to disagree despite that facebook leak.

Jeep
Compass Overland
Said to be the most premium version of the Compass yet, the Overland will look to entice Europe and other markets outside the U.S to the Jeep brand.

Grand Cherokee SRT Limited Editio
The headliner of a trio of editions designed with markets outside of North America in mind. Extras on this SRT include blacked-out exterior details and a Bright White finish.

Wrangler Moab
“Aggressive and trendy” is the look attributed to this special edition according to Chrysler. The ‘Rock Lobster’ paint-job will certainly help with that.

pro_cee’d
Second generation of the three-door version of the cee’d further enhancing the sportier, aggressive look over the previous incarnation.

Land Rover
Range Rover
It’s lighter but still very much a Range Rover, which is just what the customers told Land Rover to do. The world’s first SUV with a lightweight all-aluminium body structure resulting in a 420kg (20%) weight saving over the outgoing model, and is the first ever Land Rover product to be available with a diesel hybrid.

Lexus
LF-CC
Following on from the LF-LC 2+2 sports coupe concept from Detroit, the LF-CC is a mid-size coupe study with rear-wheel drive and a 2.5l full hybrid powertrain.

Mazda
Mazda6 estate
The saloon made its debut in Moscow last month and there won’t be a hatch. Full range of SKYACTIV technology on board.

MX-5 facelift
Show debut for the refreshed and popular roadster which went on sale in Japan in the summer.

McLaren
P1
The long-awaited and since its 18 September reveal, hotly debated successor to the F1. When the P1 goes into production later next year, it will sit above the 12C and 12C Spider, in terms of both price and performance.

Mercedes-Benz
Aesthetics S
A sculpture previewing next year’s S-Class; it is described by Mercedes as ‘an artistic glimpse of the design of the luxury saloon of the foreseeable future’.

SLS AMG GT
The ultimate incarnation of the SLS – the GT is not an addition to the line-up but rather a replacement for all existing SLS AMG versions. An extra 20bhp and interior tweaks are added.

MINI Paceman
It was seen as a concept at last year’s Detroit show, now we have it in production form.

Mitsubishi
Mirage
European debut for this sub-£10,000 car that takes Mitsubishi back to its Colt roots; has a 1.0-litre three cylinder engine and said to deliver 92g/km CO2.

Micra Elle
Micra ELLE has been developed with, you’ve guessed it, fashion magazine ELLE. No need to get your keys out of your handbag as Intelligent Key allows for keyless entry, while you can see if you need your brolly by checking through the panoramic glass roof.

Qashqai 360
Qashqai 360 includes a number of premium design features and is fitted with Nissan’s innovative Around View Monitor (AVM) as standard.

TeRRA
Hydrogen fuel cell technology is showcased in this concept which, in size, sits between Juke and Qashqai.

Peugeot
2008
A compact soft-roader to rival Nissan Juke, the 2008 is due into production later this year.

208 ‘special edition’
A ‘special 208’ model premieres as one of ten 208 models, promising the height of comfort.

208 GTI
Shown at Geneva as a teaser, this is a car that Peugeot had to do -and get right.

208 XY
Another Geneva show car that has made it into production, the XY is said to redefine small car luxury.

301
New low-cost car with 01 suffix denoting it is from Peugeot’s ‘affordable’ range aimed at Eastern Europe and other developing markets.

Onyx
Radical and striking, the Onyx, created in conjunction with Peugeot Sport, is mid-engined, rear drive with a 600hp hybrid V8 engine.

Cayenne V8 Diesel
Further broadening the appeal of its luxury SUV amidst increasing competition, the Cayenne gets a second diesel model.

Renault
Clio
Show debut for the car that Renault knows must succeed. No three door his time around.

Clio RS
The Renaultsport version of the new Clio makes its debut powered by a 1.6-litre turbocharged version of the Nissan Juke’s DiG-T engine with power expected to be around 200bhp; the old Renaultsport Clio offered 197bhp from its 2.0-litre engine.

SEAT
Leon
Goes on sale next year; a three-door and an estate are set to follow.

Toledo
Škoda will build this five-door C-segment hatchback from Q4.

Škoda
Rapid
The twin of the new SEAT Toledo and unrelated to India’s Rapid, set to be launched on European markets in October 2012.

Smart
ForStars concept
Set to directly inspire the brand’s next ForTwo, this ‘Sports Utility Coupe’ may hint at a future SUV model

SsangYong
e-XIV concept
A small crossover with a range-extender petrol engine that, if it goes into production, would sit below the

Suzuki
S-CROSS concept
A crossover concept that is said to preview the SX4 replacement due next year.

Toyota
Auris
New challenger  to the Ford Focus and VW Golf; it is longer, lower and lighter – and more stylish – than the model it replaces.

Auris Tourer
Estate version of the new Auris makes its debut. It’s the first time the Auris has been available as an estate.

Verso
More dynamic styling than the current model and better quality interior for latest Verso which rides on the Auris platform.

Yaris Trend
As the name suggests, the latest addition to the Yaris line-up sees new interior styling and options aimed at younger buyers.

Volkswagen
Golf
Show debut for the car unveiled to the press earlier this month.

Golf GTI
Concept form only at the moment, but a clue to how the 3-door Golf will look when it arrives in a few month. The GTI is lighter than the outgoing model but is expected to use the same 235bhp, 2.0-litre turbo engine.

Volvo
V40 Cross Country
Based on the V40 hatch , the Cross Country has a 40mm increase in ground clearance, larger wheels and chunkier bumpers. The T5 version will have four-wheel drive.