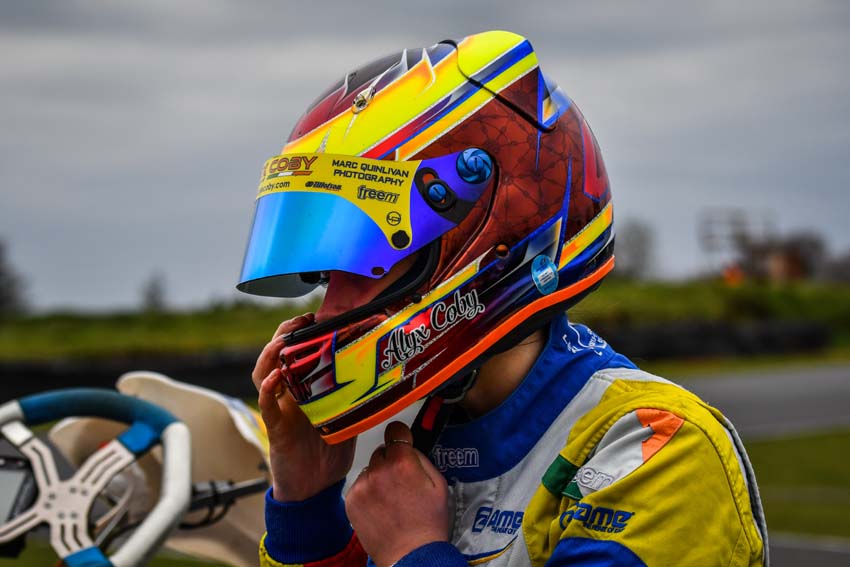 Alyx Coby at Round 1 of the Motorsport Ireland Karting Championship at Mondello Park Photos: Marc Quinlivan.

Taking to the grid to embark on her seventh season in the sport was 14-year-old Alyx Coby from Newbridge, Co. Kildare. Now entering her final year in the IAME X30 Junior class of the series, aimed at drivers aged 11-16, she has her sights set firmly on improving on her third-place finish from the previous two seasons.

With 19 karts on the grid, the largest entry for a number of years, the racing is set to be closer and more competitive than ever before, especially at Mondello Park where the karts can reach speeds of over 140 km/h at the end of the two long straights.

Alyx lined up in sixth place for the start of the first heat, picking up two spots on the opening two laps, before dropping back to finish in sixth place.

The reverse grid for the second heat meant she would start that race from 11th place. On the rolling lap to the start, the karts became spread out, but with the flagman starting the race anyway, many drivers were left out of position with a lot of ground to make up. Alyx was in 17th position by the time the race began and set about closing the gap to the karts ahead before the race was red flagged following two separate incidents on the opening laps.

When the race restarted, Alyx made her way up to 8 th position at the first corner and over the remaining six laps fought her way through the pack to finish in third place. With her lap time of 53.033 seconds in this race, the Newbridge teenager set a new lap record.

This left her in fourth position for the start of the day’s first final. With numerous delays throughout the day, it was 5 pm by the time this race began so the race distance was reduced to just 8 laps. The top four ran together for the entire race, changing positions lap after lap, and Alyx came home in third place – also setting the fastest lap of the race along the way.

With a 6pm curfew on racing at Mondello Park, the pressure was on the organisers to get through the remaining races as quickly as possible, however further incidents on track meant it was almost 6pm by the time Alyx’s main final was ready to start. A five-minute curfew extension was granted by officials, allowing the race to take place. Just like the first final, the top four ran together for the entire race. It was a drag race to the finish line and Alyx took the chequered flag in third place, with the top four separated by just over three-tenths of a second.

The second-year student from Gael Choláiste Chill Dara now sits in third place in the Motorsport Ireland Karting Championship as the series moves on to Tynagh in Co. Galway in early May.