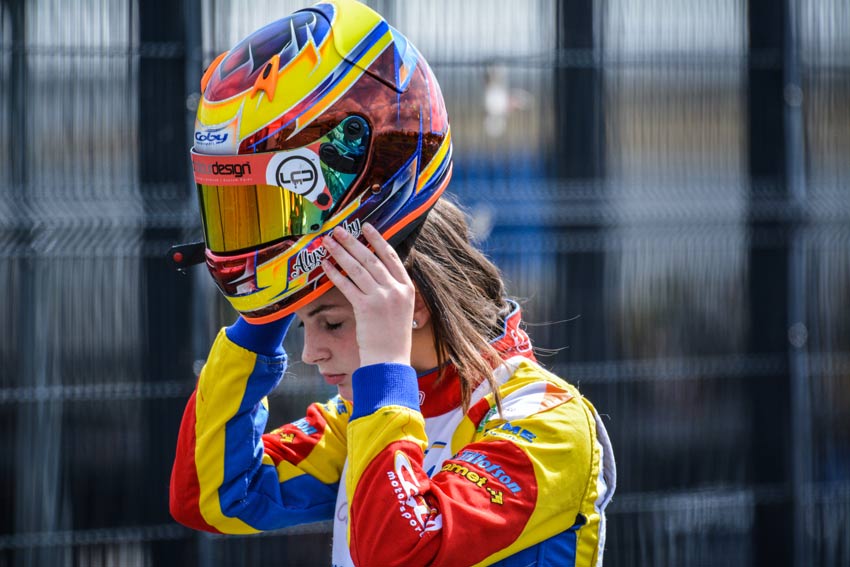 13-year-old Alyx Coby from Newbridge, Co. Kildare was back on track at the Motorsport Ireland Karting Championship

It was Coby’s first visit  to Nutts Corner Circuit near Lisburn, Co. Antrim last weekend for round 5 of the Championship. This 1.3km long circuit in the IAME X30 Junior class, caters for drivers aged 12-16, and is capable of reaching speeds of up to 110km/h. Her only previous outing at the track was in the younger cadet class two years ago so it was a steep learning curve to adapt the little knowledge she had of the circuit to the larger, faster kart she now races.

With 12 karts on the starting grid it was the largest field in the junior class this season so Coby would have it all to do to achieve a good result. Starting the first qualifying heat of the day in 9th place she set about making her way through the pack and was running in third place by the end of lap three before dropping back a spot two laps later to finish in fourth place. She also set the fastest lap of the race.

The grid for the second qualifying heat was a reverse of the first and Coby started in fourth position. A great start left her in second place by the time the karts entered the first corner. The top four karts then quickly pulled out a gap to the rest of the pack. After dropping to third place on lap three, Coby passed both the leaders on the inside as they came into the infield section of the track on the following lap to lead the race for three laps before a last lap overtake dropped her back to second with the karts crossing the finish line just over a tenth of a second apart.

Following the two qualifying heats, Coby would start the day’s first final in third place and, once again, a great start saw her up to second position by the time they exited the first corner.  By the end of lap three she had dropped back to fourth place and over the next seven laps the top four drivers were locked in a close wheel-to-wheel battle with the positions changing several times on each lap. By the time the chequered flag dropped Coby had worked her way back up to secure second place.

The second final started in the order the first one finished, and yet again Coby was in second place after the first corner. With the top four drivers being closely matched she defended the position for four laps before dropping back one place and over the remaining eight laps the drivers swapped positions almost at every corner. Coby eventually crossed the line in second place, but she and the race winner were handed 10 second time penalties for dropped nose cones, demoting them both one spot. Coby secured her fifth top three finish of the season and set the fastest lap of the race.

With the top three finishers in this year’s Championship qualifying for the IAME X30 World Finals at Le Mans in France in October, Coby is doing all she can to ensure her name is on one of the tickets by the time the season draws to a close in Galway at the end of September.

After round 5 Coby has retained her second place position in the Championship with 407 points, just 18 points behind the leader and 58 clear of the third placed driver, as the Championship moves on to Round 6 on August 13th.