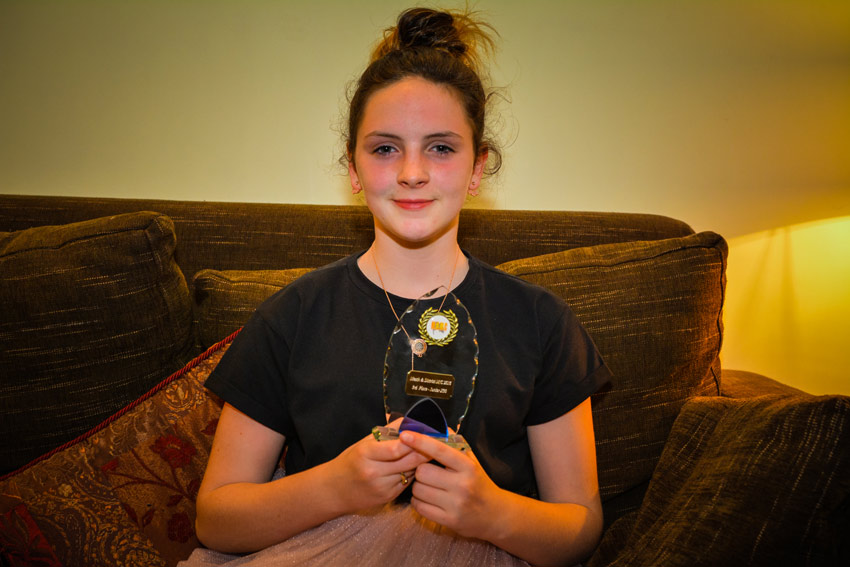 Twelve year old Karting racer Alyx Coby celebrated her first podium finish of the season at the seventh round of this year’s Motorsport Ireland Karting Championship.

The sixth class student from Gaelscoil Chill Dara began the day with fifth place finishes in both of the qualifying heats. A sixth place finish in the first final left Coby in sixth spot on the grid for the main final.

Following a great start to the race Coby climbed three places to third after the first corner before dropping back one place half way through the race to cross the line in fourth place and record her highest placed finish of the year.

A post-race two place penalty for another driver following a last lap collision promoted Coby to third place to collect her first trophy of the season.

Now in her fourth year racing, Coby has moved up to the larger, faster IAME X30 Junior class following three years in the Cadet class. The X30 Junior class caters for drivers aged from 12 to 16 and the karts can reach speeds of up to 100km/h. At just 12 years old Coby is the youngest driver on the grid and also the only girl.

It has taken some time to get used to the new kart as it has much more power and grip than the Cadet kart she had been used to racing, however she appears to be getting into her stride in the second half of the season with a number of fifth place finishes prior to the third place in Athboy.

The Championship moves on to Watergrasshill, Co. Cork on September 10th and 11th where the Munster Karting Club are hosting Round 8 of the Championship along with their annual “O Plate” meeting.

This is Coby’s favourite track and having previously won three races there she will be hoping for another podium finish.

Currently lying in sixth place in the Championship she will be looking to improve on that position by the time the season draws to a close in Galway at the end of September.