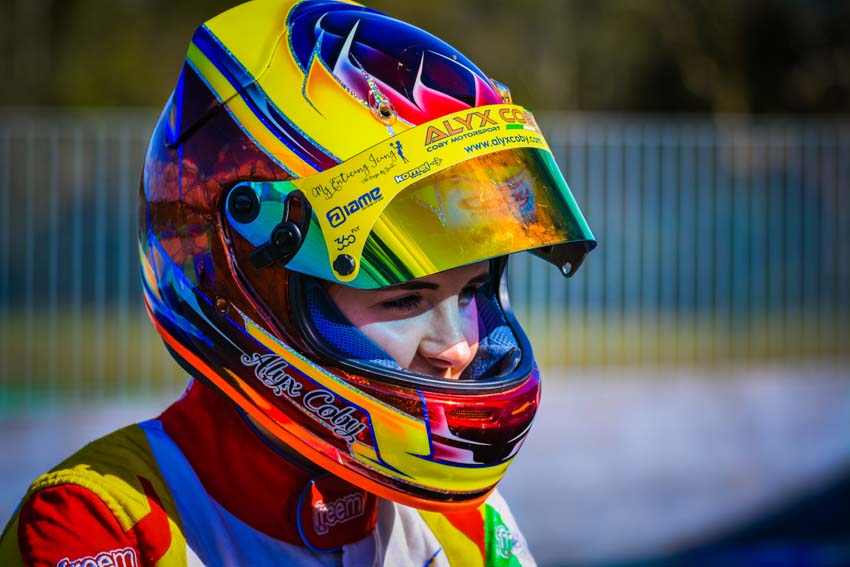 Alyx Coby at Round 1 of the Motorsport Ireland Karting Championship. Photo: Marc Quinlivan

The 2018 Motorsport Ireland Karting Championship got under way at Whiteriver Park in Co. Louth last weekend.
Taking to the grid for her sixth season in the Championship was 13-year- old Alyx Coby, from Newbridge, Co. Kildare.

Now in her third year in the IAME X30 Junior class, which caters for drivers aged 11-16, Alyx has set her sights on
improving on last year’s third place finish in the Championship.

This season sees a largely expanded grid of 13 karts in the class which promises to bring with it more action and
closer racing than previous seasons. After a longer than usual Winter break the drivers were all keen to get to racing and following a full day’s testing on Saturday, racing kicked off on Sunday morning with two qualifying heats
followed by two finals.  Alyx lined up in 4th place on the grid for the first of the day’s heats and by the time the karts exited the first corner had made her way up to 3rd. Locked in a close battle for second over the next five laps, Alyx had a couple of unsuccessful attempts to overtake before finally taking second position on the penultimate lap with a late dive up the inside under braking for the second last corner. With the chasing karts then getting stuck in their own battle, Alyx was able to pull out a one second gap to maintain her position to the chequered flag.

The reverse grid for the second heat meant Alyx started back in 10th place, but quickly gained two places at the first corner and was running up in 6th place by the end of lap 1. By mid-distance she had moved up one more position to 5th and set about catching the leading pack before pulling off another late overtake under braking into the second last corner on the final lap to cross the line in fourth place.

This left Alyx in third place on the grid for the first of the finals. The top three drivers came out of the first corner in
the order they went in and, with them being matched closely for pace and running nose to tail for the duration of
the 9-lap race, that was how they finished up.

For the day’s main final Alyx once again lined up in third position on the grid, but found herself in fifth place after the start. Regaining one spot two laps later, the first year student from Gael Choláiste Chill Dara then found herself in a close battle with the third placed driver for the next 5 laps. After several attempts to get by she eventually managed to make one stick as the karts went up the hill at the back of the circuit. Despite a string of fast laps, she was unable to make up the time lost to the leaders over the closing laps and finished in third place to secure her first podium finish of the season. She also set the fastest lap in both finals.

Alyx now sits in third place in the Championship, just 7 points behind the leader as the Championship moves on to
Mondello Park in Co. Kildare for round 2 on April 15th.

The Newbridge schoolgirl will be eager to build on her strong start to the season to ensure she gets her hands on
one of the tickets to compete at the prestigious IAME International Final at Le Mans in France being offered as prizes for the top three finishers in the Championship when the season comes to a close in Galway at the end of
September.