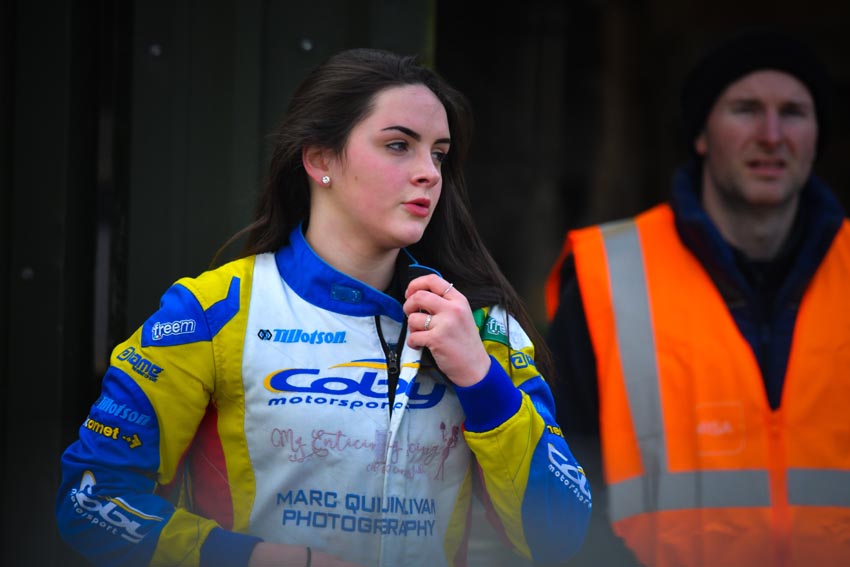 14-year-old Alyx Coby, from Newbridge, Co. Kildare was on the grid last weekend as Munster Karting Club’s 2019 Championship got under way with their O Plate meeting at Kartworld in Co. Cork.

Following some test sessions over the Winter, along with some racing in the UK, this was Alyx’s first home race of the year and also served as a warm-up for the main Motorsport Ireland Karting Championship season that gets under way at Mondello Park in Co. Kildare in mid-April.

Now embarking on her seventh season in the sport, Alyx has set her sights on improving on her third place finish from the last two seasons in what will be her final year in the IAME X30 Junior class, which caters for drivers aged 11-16.

This season sees an expanded grid of 17 karts in her class, the largest for a number of years, which promises to bring with it more action and closer racing than previous seasons.

The event saw the introduction of a new race format for many of the drivers – rather than the usual two qualifying heats to decide the grid position for the first of two finals, drivers would have a single seven-minute session on Sunday morning in which to set their fastest lap time to secure their starting position.

With the short 800m circuit packed with drivers for qualifying it was hard to find space on track for the opening laps of the session. Alyx ran third fastest for the first half of the session before setting her fastest lap on lap 7 with a time of 31.924 seconds to take provisional pole position. This time was matched two laps later by another driver, but as Alyx had set the time first she qualified in pole position.

Lining up at the front of the grid for the day’s first final, the Newbridge teenager got off to a good start and retained her position through the long first corner before being passed on the approach to the final series of corners on the opening lap. The top two then pulled away from the rest of the field and got stuck into a race long battle for the lead. With three laps to go, Alyx took the lead with a pass in the first corner, setting the fastest lap of the race in the process and went on to hold off the chasing driver to take the flag with a lead of just over a tenth of a second. Alyx’s lap time of 31.842 seconds is also a new lap record at the circuit.

This left the second year student from Gael Choláiste Chill Dara in pole position for the day’s main final. With another great start, Alyx once again retained the lead through the first corner and held off the chasing pack for the first five laps before dropping one place to second on lap 6. She briefly dropped to fourth three laps later as the karts made their way through the backmarkers before retaking third place on the next lap. Despite a string of fast laps towards the end of the race, including the fastest lap of the race, she was unable to close the gap on the leaders and finished in third place.

Alyx is tied on points for the lead in the four-round Munster Karting Club Championship and will now move her focus to the main Motorsport Ireland Karting Championship which starts in three weeks’ time.

The series runs over eight weekends from mid-April until the end of September and will visit Mondello Park twice along with circuits in counties Louth, Meath, Galway and Antrim before returning to Cork for the final round of the season.