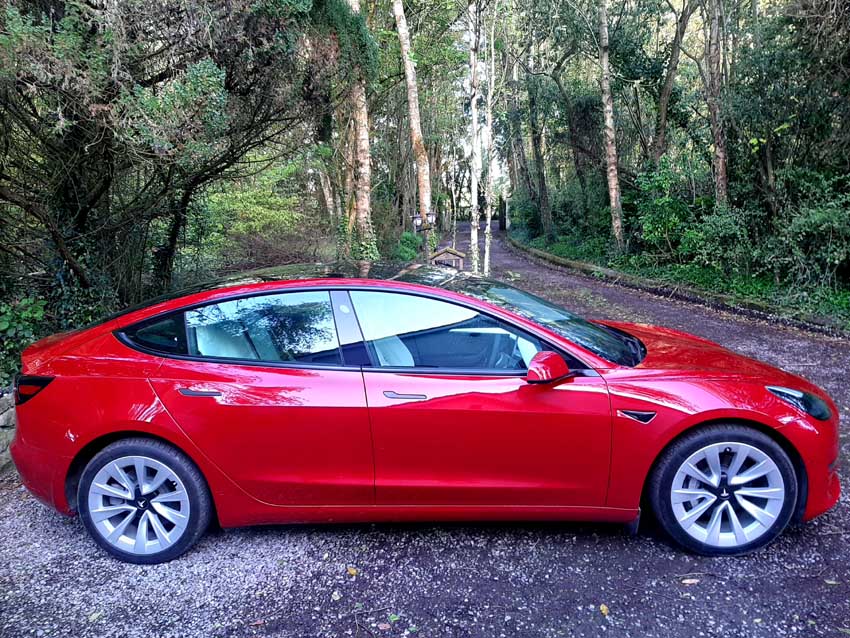 Sales of Tesla’s Model 3 are accelerating, we find out why writes Geraldine Herbert

Why kids will love it?
When it comes to cars my kids are hard to impress. It’s nothing new for them to be dropped to a friend’s house in a BMW and collected in a Mercedes and even the odd Bentley does little to sway their usual indifference. But the arrival of the Tesla Model 3 inspired a very different reaction.
Elon Musk, it seems, has tapped right into what kids love, and within minutes they had discovered a treasure chest of goodies housed on the dashboard tablet including a Mario Kart game, a romance mode with a crackling fireplace and even a Santa setting which turns your car into a sleigh. But it was the virtual whoopee cushion that was the source of most giggles. The option to choose from various different fart noises, yes fart noises, had them in convulsions in the back. And somehow unbeknown to me they had personalised this feature to go off every time I used the indicator stalk – this I discovered only after I had dropped them off.

Is it a looker?
Not quite, the exterior is certainly distinctive but not sleek. Red is the colour to opt for to enhance its kerb appeal.

How far can I go on a single charge?
That depends on which model you choose but the minimum range offered is 448km on a single charge while the max is an astounding 580 kms so will easily get you from Antrim down to Cork.

Where can I charge it?
The easiest and most convenient way to charge the Tesla is at home but if you do need to charge it on the go Tesla Superchargers will charge the Model 3 in minutes rather than hours. A new charging point recently opened at Mahon Point Shopping Centre in Cork. The site hosts four 250kW Supercharger stalls, which are open 24 hours a day. Cork is Ireland’s fifth Supercharger location with a total of 34 Superchargers now available to Tesla drivers travelling the country. 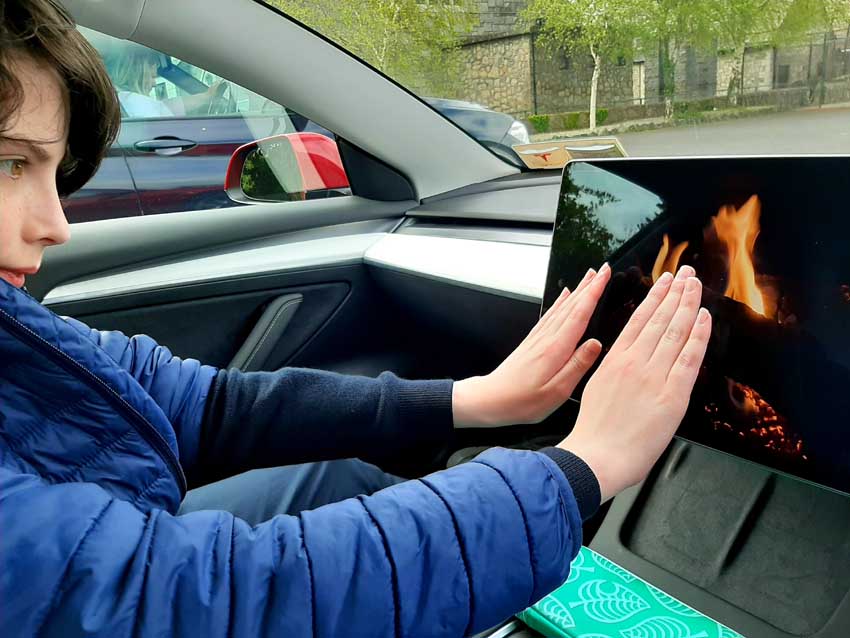 All cars should come with a romance mode 🙂

What’s it like inside?
Once inside, the Model 3 it feels like sitting in a piece of technology, even the need for a start button has been rendered redundant and a single screen at the centre of the dash houses all of the essential information.
There is also a host of useful technology including Tesla’s Autopilot system designed to assist you with the most burdensome parts of driving.- think of it as a driveable smartphone!
The minimalist interior won’t be to everyone’s taste but overall it is a practical car that will comfortably carry four adults, and 425 litres of boot space means no compromising on luggage.

What’s it like to drive?
On the road, it is spirited, silent and surprisingly fast. While it is not the most comfortable car as the ride may prove a little too harsh for some the reassuring handling and effortless power when overtaking more than compensate.

How safe is it?
Reassuringly it comes with a Euro NCAP 5-star safety rating in every category including pedestrian protection and there are also eight surround cameras that allow for 360-degree vision, while twelve ultrasonic sensors provide detection of surrounding objects.

Will it break the bank?
Available at three different price points, the Model 3 has an official range of up to 580km depending on your battery choice and a price tag starting at €48,990.

Our Rating? The virtual whoopee cushion may be trivial but it’s more than just a gimmick, the car as we see it is being reinvented thanks to Elon Musk. The smallest and most affordable Tesla marries performance, comfort and value for money in a compelling package that is unrivalled in the current EV market. Is it any wonder that Model 3s seem to be everywhere?

Ten things to know about the new Tesla Model 3

Ten things to know about the new Tesla Model 3

Ten things to know about the Tesla Model X