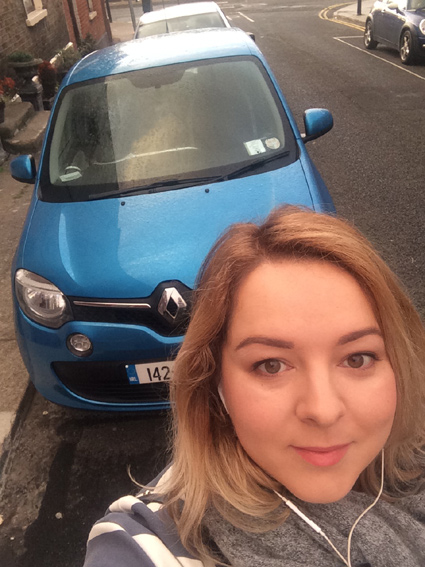 One thing’s for sure about my vivid turquoise Twingo; you’d most definitely see me coming. In a five-door, 2-litre saloon, this would be a garish shade, verging on brash – but in the Twingo, it’s just, well, fun.

This is Renault’s third Twingo iteration, jointly developed with – no surprises here – Smart, and fun is pretty much the name of the game. As a city car it sits somewhere alongside Volkswagen’s Up! and Toyota’s Aygo although, with a high seating position and rear-mounted engine, it’s an arguably easier ride.

What those two details mean – here comes the science bit – is that not only do you have an incredibly impressive turning circle of 8.6m, but you’ve also got deadly visibility, with very few blind spots to speak of, making parking a cinch. It also makes changing your mind, faced with approaching traffic, hilariously nippy – although one would obviously never recommend last-minute U-turns.

Despite its size, it also makes a fine supermarket companion – enough room for a weekly shop for a family of four, including a 12-pack of Andrex (it’s more economical, you know) – and, despite appearances, you’ll fit two carry-on suitcases in the boot, too. There’s also a load of extra storage spaces dotted around; up front, you have three cup-holders and a portable glovebox – and the passenger seat folds forward, which means no more open boot on the return trip from IKEA.

For a car with such a small, cartoonish chassis, there’s no perceptible loss of power, at least not driving around the city – it seems unlikely that someone with a long cross-country commute would opt for the Twingo in any case, although on long drives it’s surprisingly comfortable. You’ll have to get over the fact that every BMW you approach will speed up, presumably affronted at the idea of being overtaken by this tiny city imp.

Falling into tax band A, the Twingo is also high up when it comes to emissions – and fuel economy is good too. I’m lousy with l/km figures, but I can tell you that a €41 fill did me for four weeks of sporadic city driving – the odd Dundrum visit here, a last-minute cinema-in-the-rain scoot there.

As for interiors, it’s the sportiest-looking city car I’ve driven; black and white interiors add to the fun of the fair, without making it feel like a toy car – and, as previously mentioned, comfort levels are high. The suspension deals well with potholes and speedbumps although, when you come from driving a 1995 Volkswagen Golf, anything would be an improvement.

Extras? My model has Bluetooth built in and a smartphone cradle, and higher-spec versions boast touchscreen sat-nav.