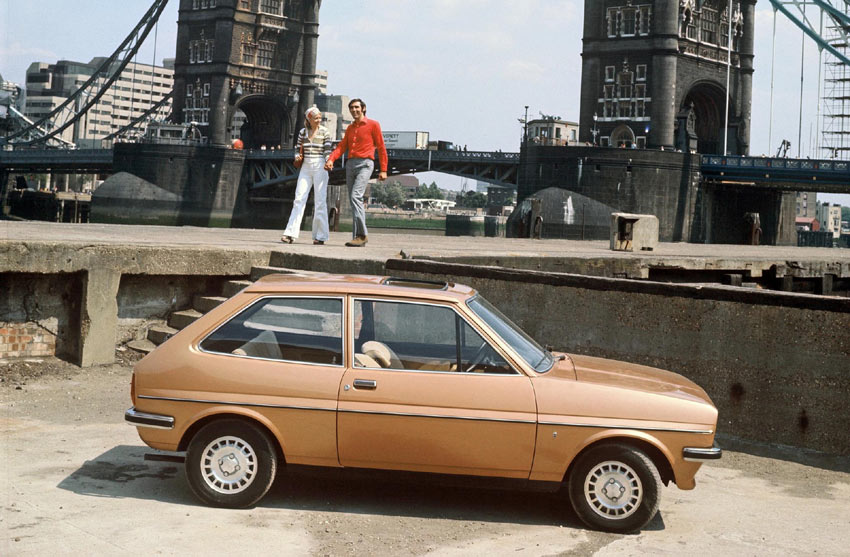 Scarily enough for those of us old enough to remember  the Mk1 Ford Fiesta is 40 years old this year. Four decades ago one of the biggest car manufacturers in the world rolled its sleeves up and aimed to build a supermini to take on the Fiat 127, VW Polo and Renault 5. The four-year development programme culminating with the launch of Ford’s second European front-drive car in the summer of ’76. Original proposals included a scaled down Ford Escort, retaining rear-wheel-drive and gaining a hatchback tailgate. This was dropped in favour of a clean sheet design; especially since the pioneering Fiat and Renault were rocketing up the sales charts.

Project Bobcat would encompass Ford’s British and German operations. The car, originally to be called the Ford Bravo, would be built in a new factory in Spain and feature a three-door body shell, four-speed gearboxes and front disc brakes as standard. Power came from 1-litre, 1.1 and 1.3-litre petrol engines with trim levels ranging from very basic to plush Ghia models with improved sound deadening and seventies velour trim. A sporty Super Sport version with a twin-carburettor 1.3 engine was introduced in 1980. This model was short-lived and is very collectable now but its replacement, the 1.6-litre XR2, would become the most prized member of the Fiesta family with its 96hp alloy wheels and big round driving lamps. Later that year the car gained detail improvements, most notably thicker bumpers, before the MK2 arrived.

The second generation of the Fiesta appeared in the summer of 1983. Effectively a reskin of the original car, this new Fiesta was the first to feature an automatic gearbox and a diesel engine. Neither was very good but while the Mk2 continued to sell in huge numbers the lack of a five door model would become the main hindrance for customers. It did finally get five-gears on some models and the 96hp XR2 kept the performance flag flying even if its alloy wheels were now consigned to the options list.

The market was tiring of a mid-seventies design by the end of the eighties so in 1989 Ford launched a third generation which addressed the lack of a five-door model. The long lived 957cc engine was finally dropped and the remaining engines were revised although the Mk3 was never celebrated for its performance and it took a while for refinement to improve. A solid if somewhat characterless little car, the Fiesta came with three or five-doors, 1.1 or 1.3-litre petrol’s and a long lived if breathless 1.8-diesel engine. Critics were unkind about the 1.6-litre XR2i although the public bought it in droves. The RS Turbo was genuinely fast but considered somewhat ragged. Both were eventually replaced by more refined Zetec-power versions.

The fish-faced MK4 in 1995 might have been visually striking but anybody used to Fiesta dynamics would be in for a shock. Despite sharing the basic 1989 architecture of the Mk3 the MK4 was stiffer, safer, much nicer to drive and to sit in. Critics raved about the  facelift along with the range of springy, zesty Zetec-SE engines. Only the cramped cabin and slightly sad-looking nose detracted.

This version received a facelift in 1999, improving the looks and retaining the dynamics and basic engine range. Like the Mk2 a decade previously though, the Fiesta was getting on and in need of another facelift.

The fifth generation was launched in 2002 and combined superb dynamics and much improved safety and build quality with fairly dull looks. Like previous Fiestas it retained the likable Zetec-SE engines although weight crept up which dulled their performance. This was the first Fiesta to get a half decent diesel engines though while the 150bhp 2-litre Fiesta ST had no problems with performance. The shy looks hid a car of tremendous talent and won which was underrated then and now.

The current car, released in 2008, is perhaps the most successful Fiesta yet. The first Fiesta since 1980 to sell in the US and a huge hit globally, the latest Fiesta is not only built in ten factories globally but spawned refined diesels, high-tech low-emission petrol engines from the Ecoboost range and what many believe to be the finest hot hatch in years, the 1.6 Turbo ST.