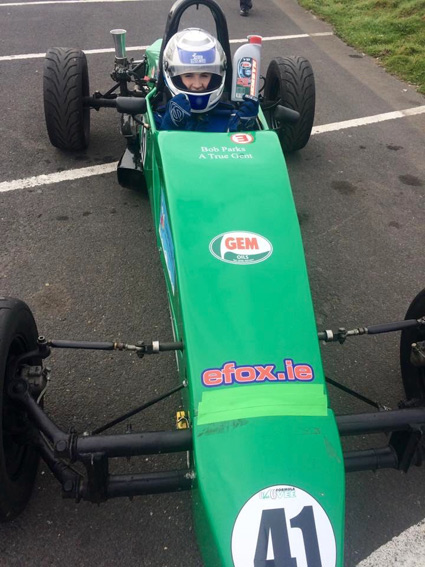 The Leinster Trophy is widely accepted as one of the most popular events of the year for Championship Car Racing at Mondello Park for two reasons. Firstly, every competitor dreams of having their name listed on the prestigious trophy that once lay in the hands of Ayrton Senna and Mika Hakkinen among many of the greats. Secondly, it’s that time of year when it is all to play for and can ultimately win or lose your championship.
This year, the trophy was awarded to the Formula Ford class which possibly impacted on the low entries experienced within the class of Formula Vee. With only 19 entrants, Formula Vee were to have one race on Saturday and one on Sunday with the exclusively B and C race being cut.

In previous years, I have been more competitive on the international circuit over the shorter national circuit. For this reason, I had higher expectations of myself than my last outings as well as having gained more experience with each race. Friday’s testing session had been successful in my mind. My times were seeing an improvement, but continued to be off the pace, although less significantly off the pace. A shift emerged whereby I was in control of the car and I could manage whatever would happen. My issue is not finding time in different racing lines or even technique, it’s all about getting my head around the speed and bravery (ie “balls” if you will) which comes with experience.

This was the first weekend that I have raced in Formula Vee where dry weather was predicted. Hallelujah! It was also the first time that I had been able to sleep the night before. Upon waiting in the assembly area for qualifying, I felt a strange sense of calm. There was no feeling of terror or fear that I had become so accustomed to. My lap-timer had decided it was having none of me, but I wasn’t overly concerned which I should have been.

Qualifying was lonesome – there was nobody in front or behind me. A positive sign in that I hadn’t been lapped by the front runners but more difficult to push myself to catch the next person. Checking out my times, I had managed to go five seconds slower than during testing. Five seconds. FIVE SECONDS? There was no excuse sufficient for five seconds. I digested qualifying with a fellow female racer and she put it so simply; “The car was the same, you were not. The fire wasn’t in your belly”. Nerves, please may a comeback later yeah? This always reminds me of the scenes in Rush where you see James Hunt spilling his guts before each race, maybe there’s something to it.

It wasn’t all bad. Although my times were well below my capabilities, I was sitting 14th on the grid of 19. I made my usual cracking start in the first race and kept the pack behind me as well as gaining a few places in the first corner. I kept my nerve and just accepted that the first few corners are the most crucial. I have always tried to stay out of harm’s way, protecting my little Vee (and my pocket), but have now developed the necessary need for speed and chaos that all Vee drivers must boast. My inexperience caught up with me by the third lap and I found myself in quite a lonely race again. There was a major shift in my attitude though; I’m no longer satisfied with taking the car home in one piece. I want in on the action. And major breakthrough – I wasn’t lapped and finished 14th of 19. Clap on the back for me!

Having had a little debrief with the team boss, Ken Elliott the night before, I came to terms with some major facts I hadn’t considered. Although I have been immersed in car racing since birth and been competitive in my previous endeavours, this has been my third ever outing in a Formula Vee. He asked me to think about the time and effort a lot of the men and women had put in to Vee racing over the years and that I should be feeling fine about both my successes and failures so far. I have always strived to do myself and other women justice, but that’s not going to come easily, I just need to keep picking myself up after every race.

Race two on Sunday had a similar result to race one the day previous. I started 14th on the gird again and finished 15th this time. I fear it is all in my head, but I felt as though the car had less grip which was forcing me to act more cautiously than I’d like. I did have a little female strop after the race, feeling I’d really let myself down and quite embarrassed about how badly I’d done. However, I hadn’t realised that I’d actually achieved a personal best time during the race. This to me now meant that I’m getting in to a space where my times and performance were no longer enough, not satisfying and not terrifying as it had felt before.

It may appear that I have been more negative or perhaps down on myself than I have been through previous blogs, but there are two reasons for this. The first is simple, I want more and I am going to get more from the car and myself as a driver. I also now feel I am genuinely capable of achieving this. There is a lot to be said for true belief in your abilities. Not just endlessly citing; “I can do this”, but actually visualising success and mapping out how to make it a reality. Working for it and deserving it.

Secondly, I had the backing of a new sponsor Gem Oils with thanks to Leo Nulty Promotions. Gem Oils  are based in Cavan, formed in 1962, a family owned business that combines industry expertise with exceptional technical ability to deliver high quality lubricants competitively in the marketplace and boast a team of talented and highly skilled professionals. I was honoured and delighted to receive their backing and it means so much to me as a female driver to be supported by them in making my way up the ranks. Sponsorship assists us to keep driving and striving to achieve our goals and I am sincerely grateful to them. You can find more information on facebook and please give them like.

You can catch me at Mondello on Sunday the 11th of October for a non-championship round. Come and say hello!