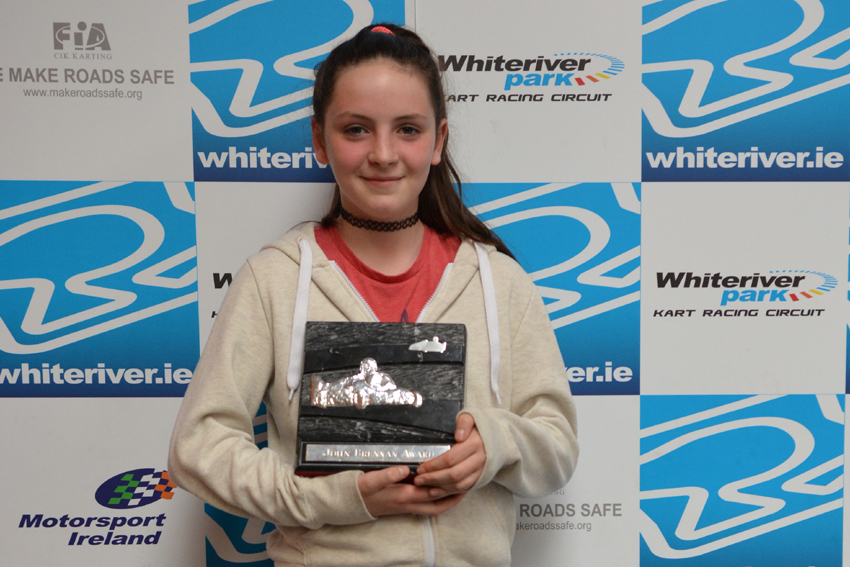 Following in the footsteps of her father, Gary, Alyx Coby, a young kart racer from Newbridge, Co. Kildare is fast proving a real contender in the Motorsport Ireland Cadet Karting Championship with a trophy cabinet to prove it.

Johnny Brennan, from Shellumsrath, Co. Kilkenny, was involved in Karting for over 30 years. As a racer he was winner of many European, British and Irish titles. He then swapped his racing overalls for mechanic’s ones and went on to run one of Ireland’s most successful kart racing teams

Speaking about the decision to present Alyx with the award the timekeepers said that in the three years Alyx has been racing they have never heard a report over the radio from marshals or officials about her for bad driving standards or pushing another competitor off track. They felt this year that Alyx best represented Johnny’s ideals for fair play in Karting.

Eleven year old Alyx Coby is youngest of the Coby family to enter the competitive world of motorsport. Alyx first started racing in 2013, aged 8, in the Cadet class and now in her final year in the  class, Alyx has shown that not only is she a very fair driver but that she also has what it takes to be a very successful one. With three wins so far this year in the Motorsport Ireland Karting Championship, only one driver has won more races and Alyx currently sits in third place on the points table with just three rounds remaining.

The championship moves on to Athboy in Co. Meath on August 16th.