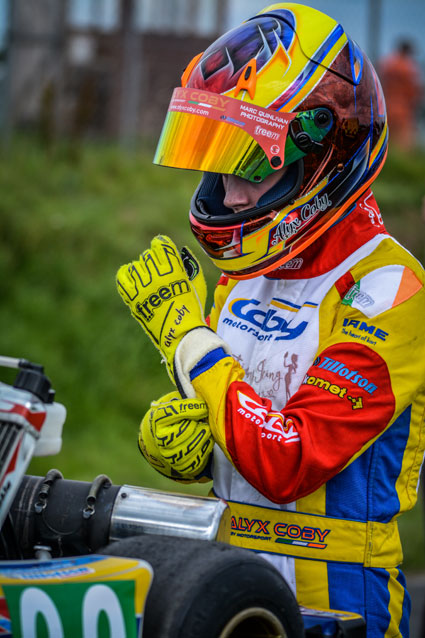 13 year-old Alyx Coby, from Newbridge is in second place heading into round 7 of Motorsport Ireland Karting Championship

13‐year‐old  Alyx Coby from Newbridge, Co. Kildare was on the grid at Mondello Park at the weekend as the  Motorsport Ireland Karting Championship returned the Kildare Circuit for the first time in eleven years.
The new 900 metre karting track had not hosted a race before so Saturday’s test session was the first opportunity  any of the competitors had to drive the track and the day was spent working on kart setup to try to get the right  balance between straight line speed for the two 300‐metre‐long straights and power delivery for acceleration out of  the corners

Coby is racing in the IAME X30 Junior class, catering for drivers aged 11‐15, with the karts reaching speeds of up to  130km/h at the end of the longest straight before braking for the second last corner at the circuit.

In the day’s first qualifying heat Coby started from fourth position. After dropping back a place on the opening lap, it  took Coby four laps to get back the position. She then set out to catch the top three drivers who had pulled out a gap  in front. Over the remaining seven laps Coby was the fastest kart on track, closing the gap by as much as half a  second per lap. She climbed to second place at the final corner, crossing the line just two tenths of a second behind  the leader and also set the fastest lap of the race. A post‐race time penalty for a dropped nose cone demoted her  one spot to third place.

Coby began the second qualifying heat in third place and gained one spot on the opening lap. On lap three, while defending her position, she ran wide on the kerbs between the final two corners, allowing the chasing karts through and dropped back to sixth place. Quickly regaining two of those places, Coby then set about reeling in the lead karts, and once again was the fastest driver on track over the next six laps – clawing back just under a second and a half on one lap alone. Just before starting the penultimate lap Coby took back the third place she started the race in and then on the exit of turn three she took the lead with a move up the inside. After being passed by the two chasing karts on the way into turn one on the final lap Coby tucked in behind both drivers for a tow down the long back straight. Coming out of the final corner it was a drag race up the hill to the finish line with Coby finishing in third place only a tenth of a second behind the leader.

For the first of the day’s two finals Coby lined up in fourth position but dropped back one spot on the opening lap. Regaining fourth place two laps later, Coby was once again tasked with closing the gap opened up by the top three drivers. As she had done in the qualifying heats, Coby closed the gap lap by lap with a string of consistently fast laps. As the last lap board came out Coby had caught the lead pack and worked her way up into third place. By the time the karts exited the final corner the top three were side by side for another drag race to the chequered flag. Coby crossed the line in third place, just under two tenths of a second behind the race winner but he was awarded a five second time penalty for a dropped nose cone which then promoted her to second place.

Coby lined up in second place on the grid for the second final, but a technical issue for the pole‐sitter meant he couldn’t take the start. This meant Coby had a clear run into the first corner but a collision following a dive up the inside by another driver on the entry to turn three saw Coby spin and by the time she returned to the track she had fallen to seventh place with a mountain to climb to make it back into a podium position. Once again she put in a string of fast laps to try to close in on the leaders, but the time lost on the opening lap was too much to regain and, despite setting the fastest lap of the race, Coby had to settle for third place, almost seven seconds behind the leader. With her fastest lap time of 31.426 seconds in the first qualifying heat Coby now holds the lap record around the new Mondello Park Junior Karting circuit.

The Championship moves on the Whiteriver Park in Collon, Co. Louth for round 7 on August 27th. Coby heads there still in second place overall on 490 points, 21 behind the leader and 58 clear of the third placed driver.