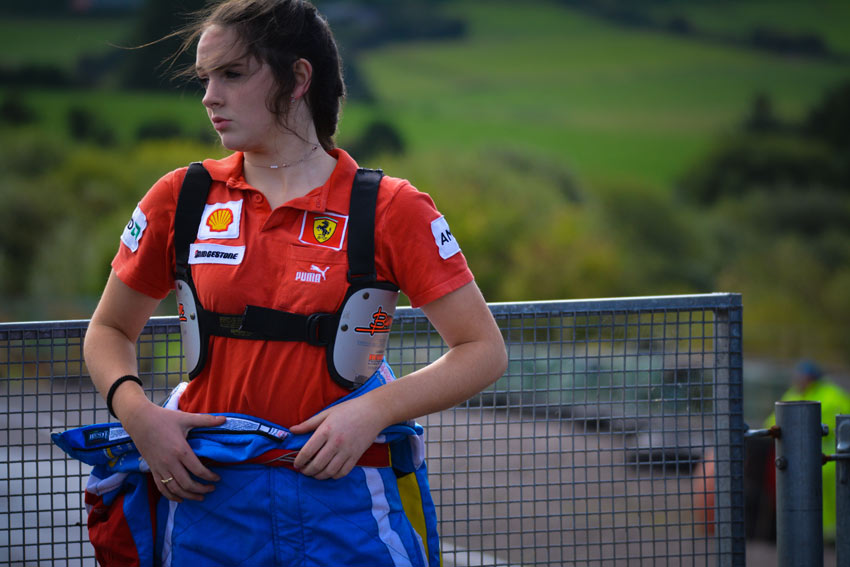 13-year-old Alyx Coby, from Newbridge, Co. Kildare was on track at the weekend as the Motorsport Ireland Karting Championship made its second trip of the year to Kartworld in Watergrasshill, Co. Cork for the penultimate round of this year’s Championship.

Competing in the IAME X30 Junior class for drivers aged 11 to 15, Coby headed into the weekend sitting in second place in the Championship and looking to close the 20-point gap to the leader.

The first-year student from Gael-Choláiste Chill Dara got the day off to a great start in the first of the qualifying heats. Starting from seventh on the grid on a damp track, she quickly made her way up to third place. With a break in the showers, Coby put in a string of fast laps as the track began to dry out and finished in second place.

By the time the second qualifying heat began the rain had restarted and the track conditions were very challenging. Coby started in third and, after a closely fought race, finished in fourth place.

Following the two qualifying heats, Coby lined up in third place on the grid for the first of the day’s finals. The rain had cleared by the time the race began the track was almost bone dry. Carrying great speed off the final corner on the rolling lap, Coby got a great start and took the lead before entering the first corner and pulled out a gap of about 10 kart lengths by the time she reached the turn-two hairpin. After dropping to second place on lap four, she regained the lead two laps later. As the karts began the second last lap Coby dropped back to second place and while attempting to retake the lead she was tagged from behind by another driver and pushed wide, turning what could have been a race win into a third place finish. A post-race penalty for that driver promoted Coby to second place.

Following some heavy showers between the first and second finals, the rain once again cleared and the track conditions were perfect for the start of the day’s main final. As has been the case for most of the season, the top four drivers spent the majority of the race running nose to tail, changing positions from lap to lap. Coby took the chequered flag in third position, but time penalties for other drivers would see the Newbridge girl secure her second win of the season in the X30 Junior class.

With these two results, Coby now sits just 18 points off the lead as the Championship moves on to Tynagh in Co. Galway on September 24th for the final round of the season. Any of the top three could still win the title so Coby will be doing all she can to make sure she comes out on top.