Welcome to the World of Rallying

Home » Features » Welcome to the World of Rallying 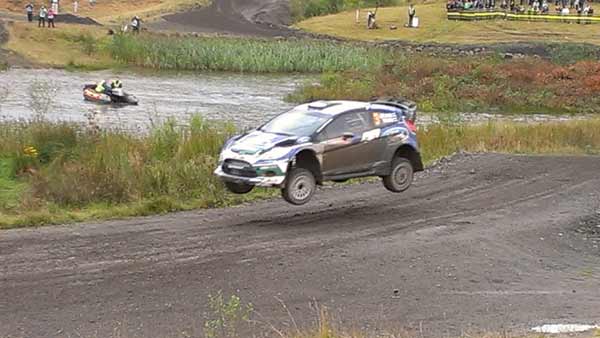 Last weekend we went to Wales Rally GB, the tenth round of the World Rally Championship (WRC), and this week she gives us the inside track on being a spectator at this iconic rally.

Rallying is a fantastic spectator sport. The average spectator may spend most of their time standing around in sometimes very harsh conditions waiting for the cars but it is all worth it for those exhilarating few seconds when each rally car finally roars by.

“Fast right over crest leading to long left before jump. Rocks on the inside.”

Welcome to the world of rallying. No doubt you could add “sheep on the outside” to the pace notes above to warn your driver of the dangers of the four legged woolly kind lurking around every corner of rural Wales…

The WRC is the pinnacle of rallying. Man and machine are tested on rallies held in some of the world’s most inhospitable places; from the dust and scorching heat of Greece, to the snow and ice of Sweden and Norway, the WRC is not for the faint hearted.

The wonderful thing about rallying is the excitement and anticipation before the first car hits the stage: often there will be a helicopter hovering overhead and then a safety car will do a final run through the stage as the crowd waits for the action with cameras poised. And then out of nowhere you here the distant rumble and rasp of a 300 bhp rally car. The whining reaches a crescendo as the car comes into view in a slew of gravel and dust. With a few crackles, pops and bangs, it is gone again.

At the weekend I attended Wales Rally GB, the tenth rally of the 2012 WRC season. This rally is very accessible from Ireland and is perfect for anybody who would like a taster of the WRC experience along with the ease of bringing your own car with you to travel around to get to stages.

A late night at the ceremonial start in Llandudno, North Wales on Thursday night left us, to use a rallying term, “off the pace” on Friday morning for Day 1 of the action. The planned 7 am start never materialised so it was not until the afternoon that we finally hit the stages.

Once we got our act together, we headed for the Hafren Sweet Lamb stage near Llangurig in mid-Wales. From our vantage point, we could see the cars coming down the hillside until they reached an open clearing where each driver swept the car around a hairpin bend, over a jump and through a mud splash before racing back up the hillside and out of sight.

On Day 2 we headed to the misty moors of the Halfway stage near Llandovery, before travelling to the forests for the Crychan stage in the afternoon and finally driving down south towards Newport in the evening for the Celtic Manor stage held in the grounds of the famous Ryder Cup golf course.  The rally drivers use the national road network just like everyone else to get to the stages so it is not unusual to have a rally car in your rear view mirror when you are travelling between stages. It only adds to the excitement!

On the final day of the rally we hit the Walters Arena stage. The main viewing point for this stage was in front of a lake and we could see the cars tackle several corners and jumps, including the biggest jump of the rally. After that it was time to go to the service park in Cardiff to catch the ceremonial finish of the rally. Finnish driver Jari-Matti Latvala took the victory over current WRC champion Sébastien Loeb. But Loeb doesn’t seem too worried; he is still in a great position to secure his ninth consecutive championship win at the end of the 2012 season! 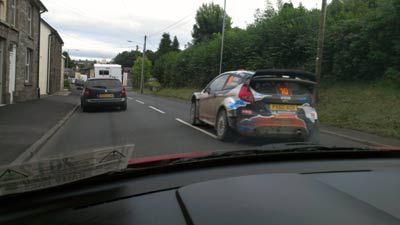 If you are planning to travel to Wales Rally GB remember to be prepared for any sort of weather. Though this year the rally was held in September compared to the traditional WRC finale here in November, a lot of the stages are very exposed. Warm clothes and lots of layers are a must. And remember to bring the wellies…you know you are at the Welsh rally when both car and occupants are covered in mud!