Home » Features » Women in the Outside Lane 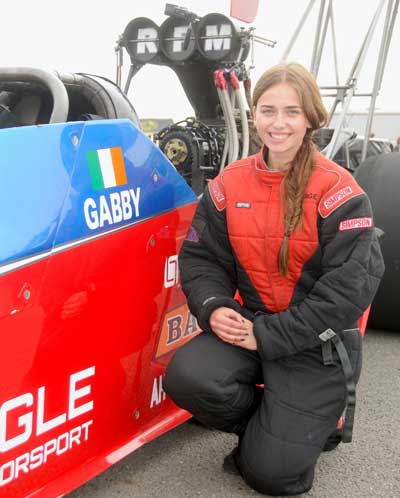 We live longer, achieve higher points in the leaving cert and, according to motor insurance companies, are less likely to have a serious accident. So why is our participation in motorsport almost on a par with female participation on stag nights?

The predominance of men is the most visible example of a gender imbalance that is at the very heart of the car industry. But like all barriers they are beginning to collapse; we spoke to three fast women blazing their own trial in motorsport

Drag racing is one of the most macho of motor sports but that hasn’t stopped 20 year old Gabrielle MacDonald becoming one of the most decorated female racers with a trophy cabinet to prove it. Shorter and quicker than any other form of motor sport, drag racing is an acceleration contest between two cars (or bikes) over a flat, straight distance. The “top-fuel” cars are the fastest cars in drag racing.

Gabrielle currently races in a 30-foot long 8,000bhp Dragster that reaches over 300mph in less than four seconds on a 300 metre track.

She accidently began drag racing when she was just 13 years old. During a family trip in America, McDonald and her parents stopped off at an amusement park while driving from Los Angeles to Las Vegas, Up until this day, she never really had an interest in motorsports.

“ I got in the dragster and challenged my dad to a race, as he used to race in Mondello”

Reaction times are what counts in drag racing and Gabrielle got a 0.0001 time, an astounding achievement for a professional, let alone someone completely unfamiliar with the sport.

“”Once I started I was hooked and that was it, I had to be dragged away from the car”

By the time she was 16 Gabrielle had become the first female and non British competitor to win the Triple British Championships. Aged 19 she began her Top Fuel licence in 2012 and not only is she the first Irish Top Fuel racer, she is the first person in the world to ever go from Junior Dragster to Top Fuel in one move, which she describes as “I’ve gone from 85mph to 300mph”

“It doesn’t matter what gender you are, as long as you are a good driver” Says Gabrielle “ once you go to the starting line, we’re just racers.”

And the future? “ My goals for the next 12 months are to get enough sponsors on board to get back out a few times next season and end up in a decent place in the championship and in 5 years time, I hope to have won the European Championship for Ireland” 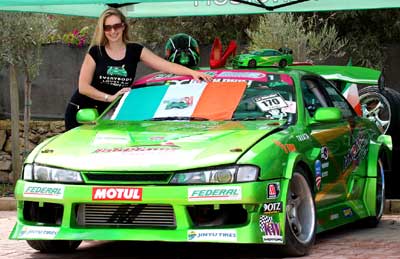 “For as long as I can remember I’ve been mad about driving” says Danielle Murphy the European Drift Queen. Driving her “Green Monster’ Nissan Silvia S14 Danielle is currently the highest ranked female drift car driver in Europe.

“Drifting is a test of precision driving with skill, confidence, speed and adrenaline all at once.” she says “ it  is controlling a rear wheel drive car around a track with clipping points, the idea is you must place the front or rear end of the car in these clipping zones to gain points while breaking traction on the rear wheels and sliding the car while in full control to the end of the course”

Her interest in motor sport goes back to her childhood.

“ Driving for me is as natural as walking” says Danielle.

She began racing eight years ago and has never looked back.

Undeterred by the lack of females role models Danielle’s ambition, from the start, was to be the first woman in Ireland to compete at top level against the best  in Europe and beyond.

“There are many great drivers with great gifts and levels of skill in Drifting but unlike other types of motorsports and extreme sports, we all start from the bottom and work our way up “

The 27-year-old, from  Newcastle, Co Down having successfully raced single-seaters in Formula Sheane for the past two years began a new chapter in her career this year with her move into Formula Ford. But Jennifer is not standing still and has sets her sights on a future in the ranks of GT racing.

Jennifer’s interest in motorsport began as a child as she watched local hero’s such as Andrew Nesbitt and the late Bertie Fisher on the rally stages.

“My passion developed from there and I started marshalling when I was old enough at 16 “ she says. “in 2007 I got the chance to try out some racing in and I’ve been bitten by the bug ever since”

Certainly, there are few more testosterone-fuelled environments than the world of motor racing. This is something Jennifer is very aware of. 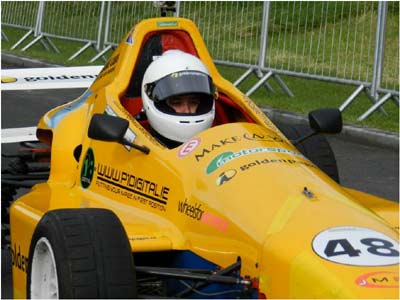 “ I have always been involved in male dominated sports from a young age when I started playing soccer and then with motorsport “ she says “If you have an interest or a passion for something don’t let anything step in your way. There is no reason why anyone can’t achieve his or her dreams”

“I find it quite positive being a girl in racing as there are no allowances made for being a woman and rightly so, we are all treated equally to the guys and when your helmet goes on and you climb in the car your just the same as any other driver out there.”

“In racing, you’re only as good as the car ahead of you”