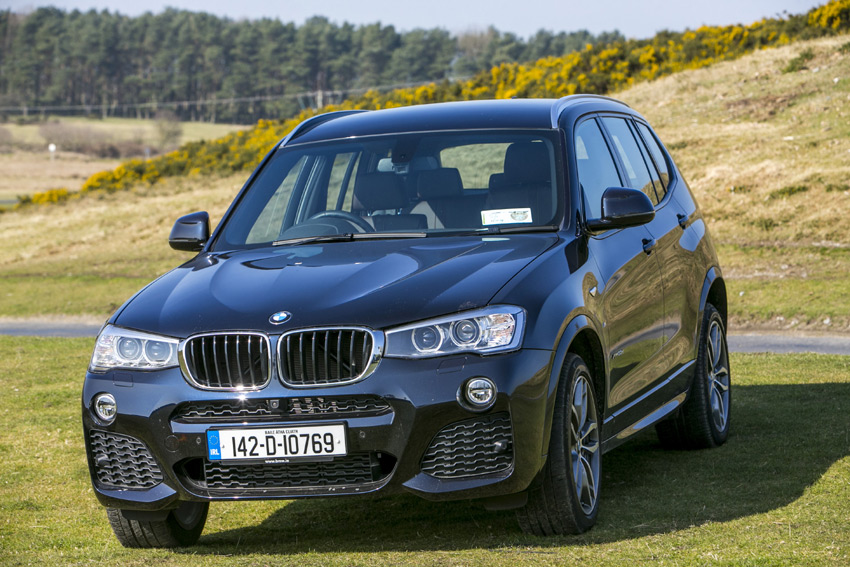 What is it?  The X5 was a huge success for BMW so it came as no surprise when they unveiled a smaller version. But when the X3 hit our showrooms in 2004 it proved a huge disappointment. Instead of a shrunken X5 what arrived was an awkward looking car awash with harsh plastic inside. Things improved in  2010 with the second generation and  for 2015  the new X3 has been further enhanced.

Who is it aimed at? The X3 has always been the one for the fashion conscious family.

Styling? The new changes are not immediately apparent but they include re-styled headlamps, including full-LED options, and a new more prominent kidney-grille.  Other subtle retouches include the front and rear bumpers have gained new contours, while the LED indicators are now housed in the new exterior mirrors.

Under the Bonnet? Under the bonnet of our test car was the new 2.0-litre four cyclinder diesel engine that produces 190hp  with  400Nms of pure pulling power.  There is also a new entry level s drive 18d that  returns 60.1mpg and with CO2 emissions of 124g/km this is one of lowest of any model in this market segment but it is rear wheel drive only and the least powerful of the range. As before there is also a three litre to choose from and if you want serious performance there is the range topping X3 xDrive35d that goes from 0- 100 in 5.3 seconds

What about inside? As you’d expect a car of this class, the seats allow the perfect driving position and the dashboard is laid out logically.  Space is good in the front and rear Passengers won’t complain about leg room either but while it is possible to accommodate three in the back  it is more suitable for two. All three seats fold down individually and the boot can swallow 550 litres and 1,600 litres with the seats folded which is far better than rivals.

On the Road? The X3 feels much more like a car than an off roader and the high driving position makes for great visibility. It drives very well and feels much lighter and more agile than its size would suggest and even through hard bends, it is beautifully controlled. Despite all this comfort it is also reasonably competent off road as a drive around some grassy terrain in the Curragh proved on our test drive.

And Safety?  Safety kit includes a host of advanced features to keep you and your occupants safe including an  anti-dazzle High-beam Assistant and a Driving Assistant Plus, which includes features such as Lane Departure Warning and preventive pedestrian protection, plus Active Cruise Control with Stop & Go function. There is also an optional head ups display that puts all the key information the driver needs to know on the windscreen right in front of their eye line.

Will it break the bank? Our test car was equipped with the top trim M Sport and a starting price of €55,910, which is fairly competitive when you look at rivals with similar power and top level specs. Volvo’s XC60 starts at €54,545, a similar Audi Q5 starts just over €55,000 and a comparable Discovery Sport from Land Rover will cost more than €58,000.

Slick design and good standard equipment may tick all the right boxes  but options on the X3 are expensive and our test car came with a media package and navigation system, adding €2,454, while other extras including a reversing camera, auto-dimming mirrors and extended storage, which pushed the price of our options to more than €8,000, giving a total price of €62,866

Verdict? While the X3 may not have the road presence of the X5 or the sportiness of the X6, it is a vast improvement on the previous version. For smart styling, a spacious interior and impressive road performance, the X3 is one to consider for the style-conscious family.

Why you won’t? Space in the rear, Pricey options