Budget tyres or premium brands: Does it really matter? #TyreSafetyDay 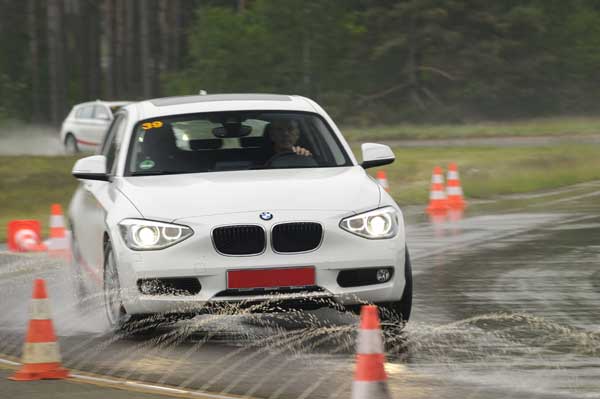 What really is the difference in performance between budget and premium tyres, and in tyres of different depths? Geraldine Herbert went to Hanover to find out.

Thundering towards a hair-pin bend at speed I am abruptly reminded of the importance of a decent set of tyres. As the back end of the car begins to slide and the wheels spin I sigh with relief that this is not a public road I am driving on but a test facility for Continental tyres in Germany .

Tucked away northeast of Hanover, Contidrom is the principal proving ground of Continental Tyres in Europe.  From wet and dry handling circuits to a race tracks this is where Continental tyres test the performance of tyres on a range of wet, dry and icy conditions. And testing tyres on wet conditions is why I am here, in particular to see firsthand the difference between budget and premium.

In the current climate it’s no surprise that many motorists shop on price and not quality. New legislation on tyre labelling has made it easier for motorist to compare tyres. Tyres are now labelled from A (Best) to G (Worst) with information about performance grades on fuel efficiency, wet braking and external noise levels all clearly displayed.

Prices are still an issue and can vary by as much as €20 to over €80 for a budget versus premium tyre. But with up to 225 days of rain each year a tyre that can handle wet conditions is vital.

Imported tires from China and Taiwan may cost less than premium tyres but are they as good?

To find out we had the opportunity to drive a BMW120i fitted with E rated budget tyres and another with Premium A rated. Given the fact that these are identical cars with the same braking and traction control systems the results are astounding. The car with budget tyres had essentially no grip, and threatened to spin out of control at every corner. Even at low speeds it was virtually impossible to maintain a constant road position. Stepping into the same car fitted with premium tyres was a totally different experience. It came as no surprise that the premium tyres are better; the eye-opener is by how much. It drove like a totally new car. At high speed it was composed and cornered with ease. The difference between both cars was simply the choice of tyres. 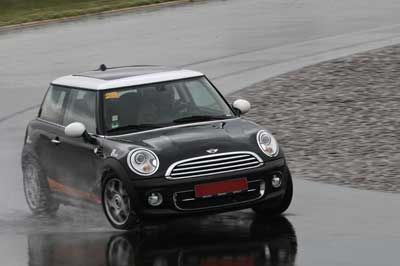 Mini Cooper fitted with a mix of budget and premium tyres

Next up was the question of mixing budget and premium tyres. Tyres are normally replaced in pairs and very often the old ones are put to the front of the car and the new ones to the rear. So does it really matter if you mix premium tyres and budgets tyres or  should the new tyres be fitted to the front or to the rear?

To find out we drove three Mini Coopers fitted with a different mix of budget and premium. The first was fitted with premium tyres worn down to 4mm at the front, and brand new budget tyres at the rear, with the full 8mm of tread.

Another Mini had the same set up but in reverse so the budget tyres were to the front. The last Mini was fitted with 4mm and 8mm Continental tyres on the front and back.

The Minis were driven around a tight circular circuit designed to mimic a roundabout or a motorway exit.

The Mini most stable at speeds above 50km was the one fitted with 4mm and 8mm premium tyres on the front and back clearly illustrating that if you are only buying two new tyres they should be mounted at the back. 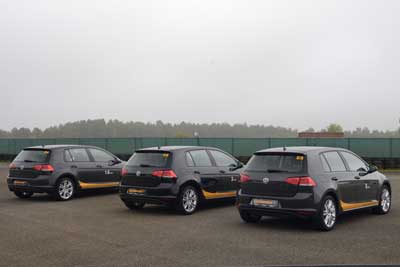 Each Golf was fitted with Continental tyres. The first, with 8mm of tread, the second with 3mm and the third, with the legal minimum of 1.6mm

The final and most alarming test of the day was the one for tyre depth. To assess how much the level of grip in a tyre deteriorates as the tread wears we tested three identical Volkswagen Golfs on a wet surface. Each was fitted with Continental tyres. The first, with 8mm of tread, the second with 3mm and the third, with the legal minimum of 1.6mm.

The test was to drive at speeds of 60, 70 and then 80 km on a surface with 5 mm of water. At all three speeds the newest tyre with the 8mm of thread shows no change on the wet surface and performed identical on both dry and wet conditions. At 3mm of thread the differences were noticeable and by the time the car has reached 80km it was aquaplaning. However nothing compares to the serious loss of control that occurs when driving at the car with the 1.6mm thread. At a speed of 80km the car had slide into the next lane before it was possible to regain full control of the car. In a real life situation this would be a frightening if not fatal event.

No matter how good your car is the level of grip you have on the road is determined only by the quality of your tyres. When shopping for new tyres buy the very best that you can afford. Think of them as insurance and don’t skimp.

Free Check For All Tyres