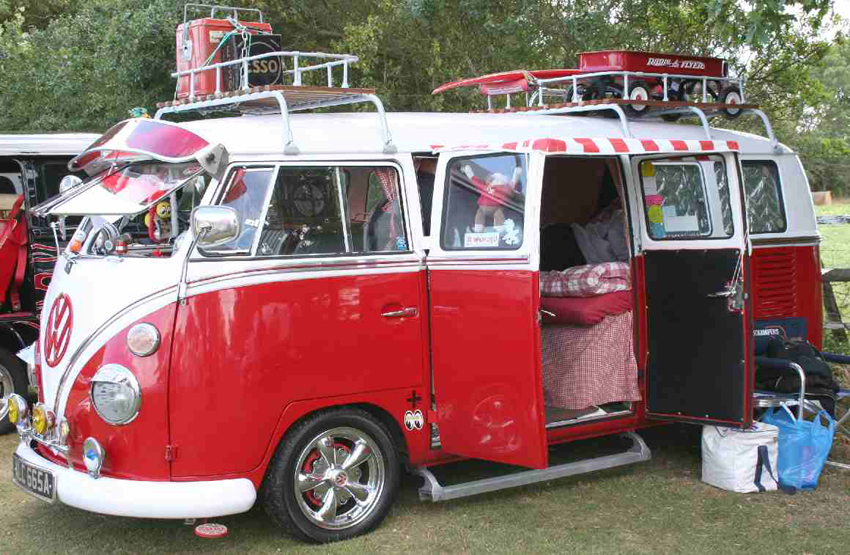 For those wanting to wallow in delicious nostalgia the VW camper van has to be one of the most characterful motors on the go.

Long associated with hippies and surfers alike today these vans are making a comeback for family excursions based on economy and imagination. But rumours of its imminent demise were finally confirmed when in December, the last VW Camper Van rolled off the production line in São Paulo. Regulations on Co2 emissions have confined this car to the motoring archives.

Purchased 25 years ago by Declan Richardson and his wife, Jenny, the van was a treat to be enjoyed in Declan’s retirement.

“The Camper van caught our eye in the paper and that was it. I bought it from a private seller who turned out to be my bank manager” he said  “We just loved the sense of freedom it gave it, it completely changed our lives”

It’s an indulgence Steve Manly has enjoyed for more than 20 years. In 1991, after a motorbike accident he went to thank the old lady who had taken him to hospital.

“I arrived with chocolates and left with Jessica a type 2 camper van parked around the back” says Steve.

He promised himself he would spend “a month or two” getting it back on the road. Just a small project, something to occupy himself now that the motorbike was no more.

“Years of work and thousands of pounds later I have restored her twice and she is now being rebuilt professionally for the first time, for her 50th year.

While all Camper van owners are in search of something a little different, a little more rewarding than anything a modern car showroom can offer not all are necessarily interested in getting their hands dirty.

” I wanted to avoid having to deal with many rusty patches” says Conor Farrell a freelance designer from Co. Louth who paid €11,000 for his “ pride and joy”    “While this obviously increase the price if you are not a fan of restoration work its the best option.”

For holidays their lure seems to be irrepressible Camper vans make perfect sense. They are smaller, lighter, and easier on fuel than most full-size motorhomes.

With a love for all things motor-related, self confessed “petrol head” John Saunders bought his camper van over five years ago.  For him his 2002 eight seater van offers a sense of adventure.

“There is nothing like sitting in a campsite with a map of Ireland and deciding, where to go next” says John, “holidays become a journey and not a destination”

Patrick Knightly,  a Retail Floor Manager,  from Kerry got his van as a wedding present and has been his passport to a whole new community “ everyone with a VW camper will wave at someone else driving one and everyone has a story behind their van” says Patrick “When you drive down the street everyone stops and stares”

And, as the popularity of VW classic camper vans soared, Self-confessed VW Camper Van fanatic Louisa Barry decided to take advantage of this emerging revolution to raise some money for charity.

“Nine years ago I started the charity Eireball Run and to date we have raised over €70,000 for charities”  says Louisa  “ Each year a challenging route is set and a convoy of classic Volkswagens winds its way around the island of Ireland”

“It’s a fantastic week touring around Ireland in convoy and attracts visitors from all over Ireland, The UK and the Isle of Man”

But it seems the numerous breakdowns, a constant feature of the yellow and white Volksawgen bus in the off beat Comedy” Little Miss Sunshine”  was not just to enhance the story. Owners testify to regularly have to being forced to get out, push, run like mad and jump back in once the Van starts running.

“We have had too many breakdowns to mention” says Helen O’Dwyerfrom Kilkenny “in 2005 on the way back from holidays the engine caught fire!”

Vicki Gray, an IT consultant from Dublin tells a similar story

“The last day of a fantastic 2 week holiday camping in France we had just got  as far as  Rosslare, greeted by drizzle and grey skies,  when the engine blew up”

So it seems Camper Vans really are the universal ice-breaker and in these penny pinching times provide practicality, comfort and nostalgia. Even though production of the archetypal VW camper van has ended this motoring icon is likely to a permanent feature on our roads.

Tempted to buy one?  here are some words of advice from Camper van owners.

APMP Irish Car of the Year

A range of finance offers from Mitsubishi Motors