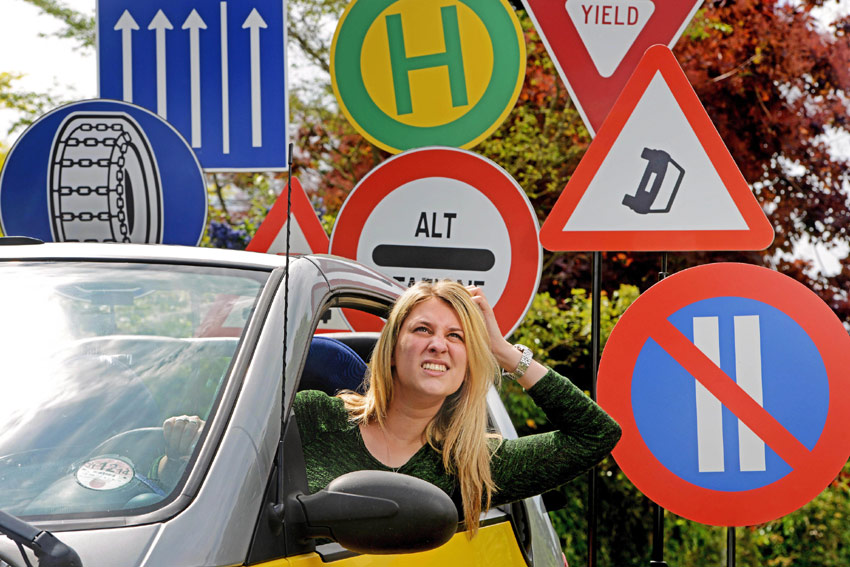 With the good old reliable Irish  Summer weather remaining as unpredictable as ever, more and more families are packing up their cars and driving to Europe in search of sun and family fun. Before you go, take the stress out of the journey by being fully prepared.

A to Z of Driving Abroad

Autobahn – Germany is one of the few places in the world where drivers are allowed to decide for themselves how fast to drive, limited only by the car they are driving. While there are no speed restrictions on certain stretches of the Autobahn 130 kph is recommended. It is worth keeping a close eye out for the speed limit signs as it is very easy to move unaware onto a restricted section where the speed limit ranges between 80-130 km/h.

Breakdowns – If you breakdown on the continent it could prove very expensive so before you go invest in breakdown cover. If you are in any doubt about the condition of your car get it serviced. Pay attention in particular to wiper blades, signals, indicators, brake lights and the condition of your tyres. Also, check oil and water levels.

Compulsory –  In most countries, you must carry a reflective warning triangle and spare bulbs. In France, Spain, Germany and Italy seatbelts are compulsory for front and rear seat occupants. In France, drivers are also required to carry an unused breathalyser kit however the fine for drivers not carrying a breathalyser has been postponed indefinitely.

Documents – Ensure also that you have your legal documents, passport, drivers licence, registration documents and motor insurance all easy to hand.

Drink Driving laws – The laws across Europe vary widely, most countries the limit is 50mg per 100ml of blood but in Hungary, Romania and the Czech Republic it is zero. In Scandinavia, the limit is so low that effectively you can’t drink for 24 hours before you drive. You are more likely to be randomly tested for drink-driving in Europe.

Emergency – 112 is the European emergency call number you can dial anywhere in the European Union in case of accident, assault or in any other distress situation.  If you need to contact the Irish Embassy the number is +353 1 408 2000. Outside normal office hours, an Emergency Duty Officer is available at all other times (including weekends), 365 days a year at the same contact number.

First aid kit – A first aid kit is useful to have in the car and is a legal requirement in some countries so it’s a good idea to include visibility vests, replacement bulbs and a warning triangle in case of breakdown.

Glasses – If you need to wear glasses while driving you must keep a spare pair in the car with you by law when driving in Spain, Switzerland and Liechtenstein.

Horn – In many countries there are strict laws about using the horn unnecessarily especially in built-up areas so it’s best to resist the urge.

Insurance –> Before you leave home notify your insurance company that you are taking your car abroad. Although you should be covered automatically for third-party liability, it may be a condition of your policy that you inform them before going.

Junctions – Also when using roundabouts give way to traffic coming from the left and pay particular attention when turning left.

Lights – Dipped headlights are required by law at all times on all vehicles in Scandinavia. Beam converters for headlights are also necessary when driving in France, Spain, Italy and Germany.

Mobile phones – Never use one while driving. It’s dangerous and illegal in most countries.

Night driving – Fines in Italy increase by a third at night so if you find yourself out between the hours of 22:00 and 07:00 be extra cautious.

On-the-spot fines –From speeding to parking illegally, if you are caught breaking the law expect a fine and in many countries they’ll want you to pay it there and then. Speeding fines can range from €150 in Italy to over thousands of euros in France.

Parking – Restricted parking cities and towns is a common feature in many countries. In France and Spain parking is allowed on one side of the street from the 1st to 15th of each month, and then switches to the opposite side of the road for the second half of the month. Odd and even days can result in different parking arrangements in Spain.

Rental cars – Before you set off inspect the car in detail and point out any damage or marks at the beginning of the rental and do the same when you return the car. It is also a good idea to check all the lights are working and the wheels are in good condition before you take the keys and leave. Beware of extra charges for second drivers, baby seats, sat-nav and the like and check the refuelling policy.

Right – Once off the ferry remember to drive on the opposite side of the road, this may sound obvious but it is very easy to forget and revert to your normal driving pattern. A good rule of thumb is to drive on the motorway when you first arrive as it will familiarise you with driving on the right. It is far easier to drift to the wrong side of the road on a back road so stay on the main routes for the first few days.

Speeding – Obey the speed limits and don’t rely on speed-camera warning devices. These devices, including satnav systems that alert you to speed cameras are banned in many countries including Belgium, France, Switzerland and Austria.

Tolls – Many countries charge tolls on motorways, particularly France and Spain, so take plenty of change with you as often these are automated barriers.

Valuables – Never leave valuable items such as mobile phones, laptops, etc in view, even when you are driving. Keep valuable items locked in the glove compartment or boot of the car.

Warning triangle – It’s compulsory to carry a warning triangle in your car in most European countries except Spain and Turkey, which demand you must have two. In many countries, including France, you must carry a set of spare light bulbs too.

Young drivers – In some countries different drink driving laws apply to drivers aged under 21 or those who have held their licence for less than two years. In Germany, there is zero tolerance for all drivers less than 21 years old.

Zipper rule – In Germany when traffic is congested, normal right-of-way rules give way to the “zipper rule”. It means vehicles from each lane must give way one at a time.

Dispelling the Myths on Drink Driving

The Strangest Driving Rules from Around the World

Planning to take a car to Spain this year?