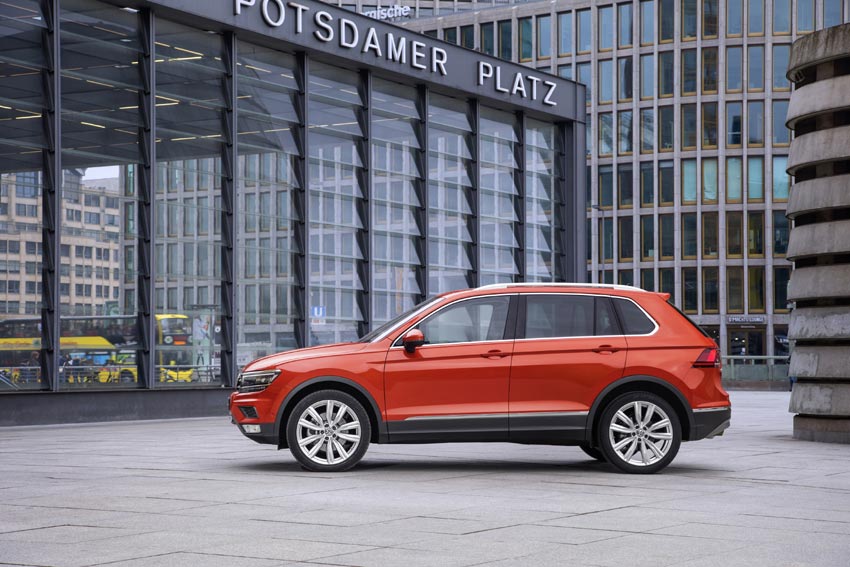 What is it? The Volkswagen Tiguan was originally launched back in 2007 as a bigger Golf or baby Touareg and since then Volkswagen have sold more than 2.8 million in 170 countries worldwide. With an ever increasing numbers of buyers in the market for a crossover this revamped model is more stylish and practical than ever and will be here just in time for 162 sales.

First impressions of the new Volkswagen Tiguan? The new Tiguan is 33mm lower overall and 30mm wider which combined with being 60mm longer gives a sportier and more aggressive stance than its predecessor. It has also been fitted with the mean looking Volkswagen front end which is appearing across all models recently and even with all these changes the new model has lost 82kg on the previous version.

What about the interior?  The seating position in the Tiguan does seem lower than competitors and it feels more like a car than an SUV inside. The quality of materials used on the interior is quite impressive and if you opt for the Highline version you’ll also get Active Info Display which has a 12.3” digital screen in place of the usual clunky instrument clusters. There’s plenty of leg room in the front and rear and the sliding rear bench allows for 145 litres more boot space. When the rear seats are folded flat the load area grows to an impressive 1,655 litres and if you do intend to use your Tiguan as a workhorse the 4 motion versions are capable off-roading in style and have a towing capacity of 2,500kg.

Volkswagen Tiguan on road? On the open road the Tiguan is smooth and the 2.0L diesel engine in both 6 speed manual and 7 speed DSG versions was quiet and refined and will tackle bends and bumps effortlessly. In 150bhp guise it’s well able to keep up on the motorway although the acceleration won’t set your heart racing. Around town it’s nippy and very capable but despite the bright orange exterior of the Tiguan driven in Berlin it is lacking the fun factor.

Volkswagen Tiguan off road? the off-roading skills of the Tiguan were put to test at a specially designed course at Mellow Park, Berlin’s famous BMX supercross track, and the 4 motion version was more than capable of tackling bumps and loose gravel on steep slopes. Use of the camera system, particularly those fitted to the wing mirrors, allowed a view down both sides of the car and showed where the wheels were pointing at all times – especially useful when crossing narrow obstacles! The doors have also been designed so that dirt and mud can’t sit on the sill and dirty your clothes on the way out.

How much? Prices for the new Volkswagen Tiguan start at €29,765 for a 1.4L petrol engine with PCP options starting from €359 per month for this in the Trendline spec where a 2.0L TDi Comfortline will come in at around €389 per month. Engine options at launch will include a 120bhp 1.4 TSI Petrol and a 2.0L 150bhp diesel version. A 115bhp diesel version will be also be available from early in 2017.

How safe? The New Tiguan is equipped with  a raft of active and passive safety measures  including Assist with City Emergency Braking and Pedestrian Monitoring; active bonnet; automatic post-collision braking and Lane Assist are fitted as standard.  The first active bonnet on a Volkswagen reduces the risk of injury to pedestrians and cyclists by lifting upward in the event of an impact – rising 50 mm within 22 milliseconds of an impact.

What about my options? The base model Trendline will come with a sliding rear bench, 17” alloys, LED taillights, a 5” touchscreen, Bluetooth connectivity, leather steering wheel, air conditioning, lane departure warning and city automatic emergency braking. Upgrade to a Comfortline and you’ll get folding tables on the back of the front seats, privacy glass, a 6.5” touchscreen, multifunction steering wheel, lumbar support in the front, adaptive cruise control, 3 zone air conditioning and Park Pilot. The range topping Highline will also come with ArtVelours upholstery, a winter pack which includes heated seats and washer jets, 18” alloy wheels, a reversing camera with Park Assist and LED headlights with dynamic range adjustment.