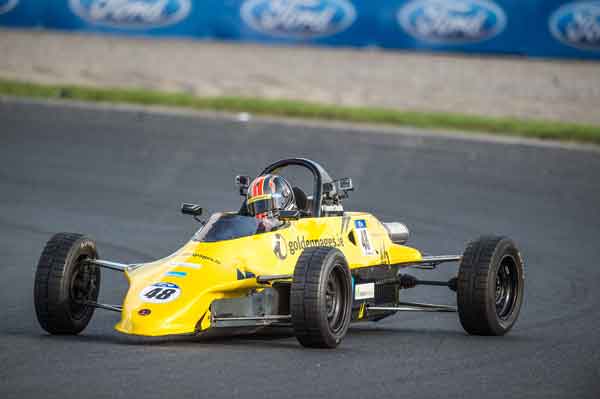 Jennifer in action at the weekend.
Photos by Michael Chester

We catch up with Jennifer Mullan as she competes for the Leinster Trophy in Mondello last weekend.

In the middle of last week I really didn’t think I would be writing a Leinster Trophy blog after the smallest of mistakes in testing last Sunday, my goldenpages.ie car was left with a massive amount of damage to try and repair in just three days. I had run out wide coming out of the chicane on the International part of the Mondello Park circuit and the car bottomed out when it hit a strip of tarmac that runs across the grass which bent the bottom of the cars chassis up and broke bits of the engine and gearbox. We only really discovered the extent of the damage on Wednesday and with a few miracles and a lot of running around my team managed to get me on track for two laps at the very end of the Friday testing to make sure there was no internal damage to the engine and gearbox before qualifying on Saturday. I am fully convinced that most people would have looked at the car and said sorry but it’s just not going to happen for the weekend, but no, the FCR Media Racing guys never gave up and even on Friday when the car tried everything it could not to go back together they pulled it off!

I had gone two seconds a lap faster at the Sunday testing than I ever had so I was really keen to try improve this further to give the team some reward for all their hard work. We had a qualifying and two races on Saturday to conclude the Champion of Mondello series followed by a qualifying and a race on Sunday for the prestigious Leinster Trophy. With the Saturday races also being rounds of the Northern Ireland FF1600 championship, a few of the older cars like mine had travelled down to race so it was a chance to see where I really was in terms of my pace.

The first qualifying of the weekend didn’t really go to plan with a small braking issue but I knew that everything else with the car was spot on so it was no big deal. The first race of the day wasn’t great on my part, it was taking me a little longer than I would have liked to get my confidence back after my little incident last Sunday and I just couldn’t keep up with the guys in front. The second race of the day however was a good deal better. I kept the other lads in my sights and in the closing laps I managed to close in on them setting a personal best lap time over half a second better than I had ever done. However I just ran out of time to try get past any of the three cars lined up in front of me but I did set a faster race lap than them which gave me a real boost of confidence going into Sunday. 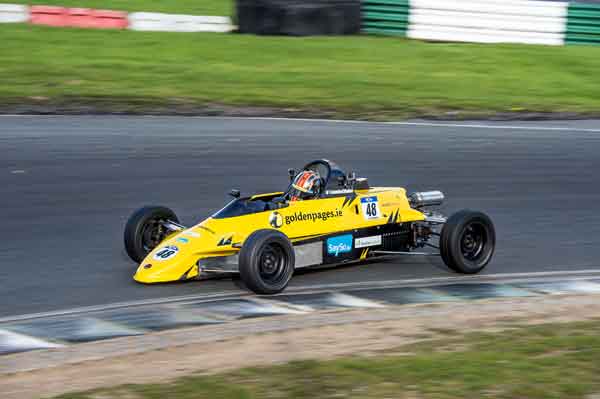 Saturday night was spent watching video and looking at my data over again to see how I could improve for the next day. Thankfully it worked and I managed a lap in the Leinster trophy qualifying another half a second quicker than ever putting myself P11 out of fourteen on the grid. There was a six hour gap to our race which was a bit of a killer and when we eventually got going I made a terrible start with too much wheel spin and then missed a gear and fell back. But the red flag came out for an incident at the first corner meaning I would get another chance at starting eleventh. We were sat on the grid for around half an hour waiting for the restart which was a bit of a nightmare given the heat and being all suited up with our helmets on etc. When we got going again I made a slightly better start keeping Henry Campbell in a similar car behind me. I could tell from the start that I was struggling with my pace and a few laps later Henry got past me but I stuck with him for a few laps before a couple of hairy moments eventually ended with a spin at Paddock bend putting me out of the race. After watching the video back it became clear that certain parts of the track had become very slippy and I just didn’t manage to deal with it very well! It was a disappointing end to what had been a very positive weekend up to that point. I’m not going to dwell on it though as there are so many positives I can take out of the weekend to bring to Kirkistown with me in two weeks time for the Martin Donnelly Trophy races.

As always I have to say a massive thanks to my sponsor’s goldenpages.ie, mobileready.ie and sayso.ie, it’s these guys who make it all possible! I would also again like to thank every last person who helped with getting my car and me back on the grid and everyone who sent their support over the weekend!