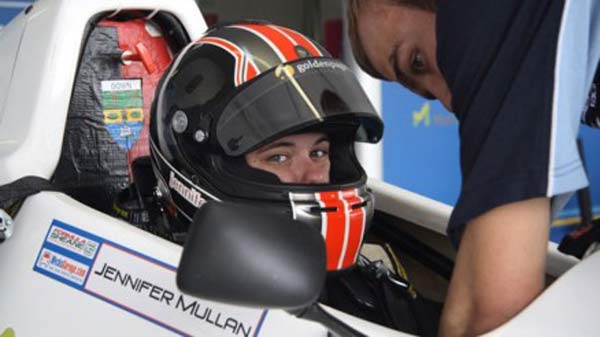 2013 Formula Sheane Fun Cup Championship runner up Jennifer Mullan is making the switch to Formula Ford 1600 for the remainder of the Champion of Mondello Series.

Jennifer will get her championship campaign underway on Saturday June 7th at Mondello Park before taking part in the Irish Formula Ford festival the following day at the Co.Kildare venue.

“I’m really looking forward to this new challenge, having really enjoyed last season in Formula Sheane I feel I am ready to make the move to Formula Ford and continue to improve there” says Jennifer “ Coming into the Champion of Mondello series at round three I am feeling confident I can make up the lost ground from the opening weekend of the championship that I missed and hopefully win my class come September”

The Irish Formula Ford Festival takes place this coming weekend, June 7th & 8th and will be a first for Mondello Park as two different circuit layouts will be used over the weekend. Saturday will see the Formula Ford Champion of Mondello races take place on the National Track, along with a supporting programme made up of Formula Libre, Patch Fiesta Championship and Historic races.

The Formula Ford Festival event will run entirely on Sunday with the action moving to the International Track.