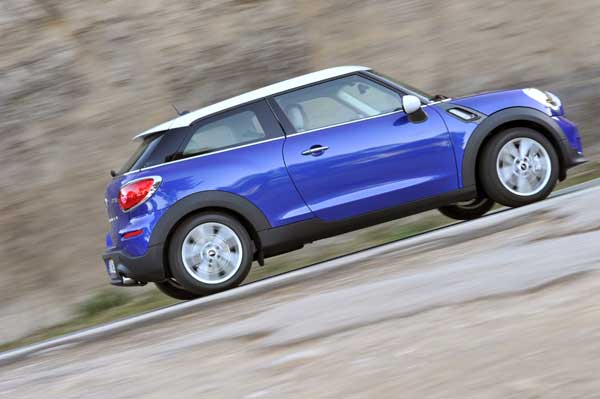 So is the new MINI a case of four doors good but two doors better, Geraldine Herbert finds out!

What is it? MINI has added to the family, yet again.  The iconic brand already includes a Hatch, Clubman, Convertible, Countryman, Coupé and Roadster.  The seventh and latest model to wear the MINI badge is an SAV, a Sports Activity Vehicle called the Paceman.

Who is it aimed at? This is a MINI designed for singles or a couple with no kids and is firmly aimed at those who enjoy camping, golfing and the great outdoors.

Styling? Essentially the Paceman is a sporty two-door coupé version of the Countryman; while the Countryman was designed to appeal to young families unimpressed by the typical mini-MPV, the Paceman is all about style. From the front and side the Paceman looks much like the chunky MINI Countryman and shares a similar sized wheelbase. If you look closely you’ll notice some distinct changes, the rear lights are now horizontal where before, like the original MINI, they were vertical. This is also the only MINI to have a vertical name plate at the back.

Under the Bonnet? Our Cooper SD Paceman was powered by an eager 2.0-litre diesel engine. There is also a smaller 1.6 diesel in the Cooper D Paceman. For petrol buyers there is a choice  of a 1.6 engine with two power outputs, one with 122bhp and a Cooper S version that pumps out a very sporty 184bhp. Each come with a six-speed manual gearbox, or an optional automatic.

What’s it like inside? The inside looks like a typical MINI from the speedometer to the snappy toggle switches it’s all very funky and retro. Ergonomics are not MINI’s strong point and there are small and oddly shaped storage bins throughout and the trademark speedometer, while huge, is still as hard to read. Space in the front is good but limited in the rear which would be far from enticing on longer trips. The boot space is a decent 330 litres, which expands to 1080 litres with the rear seats folded down. 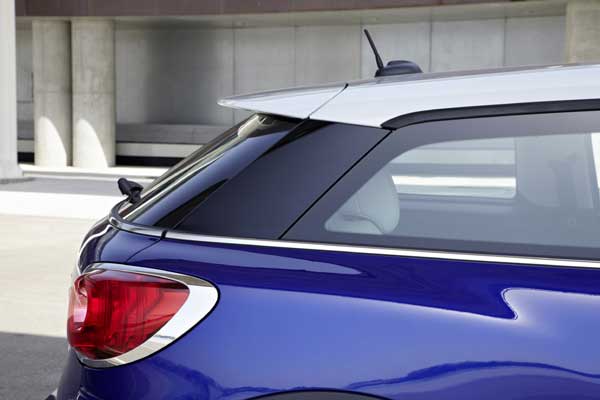 The roof gently slopes towards the rear of the car

On the Road? According to MINI, next only to style, driving dynamics and the characteristic go-cart handling are the main reasons why buyers opt for this brand. With this in mind the Paceman certainly doesn’t disappoint. While it is not as sharp as the hatch and the extra weight is apparent it negotiates the twists and bends with reassuring ease.  The sports suspension is overly firm though and on less than super smooth roads traction suffers.  As a result the joy of this MINI is revealed to the driver only and passengers are not as well rewarded.  It is also a little on the noisy side.

And Safety? Thanks to an extensive range of safety equipment the MINI Paceman is as safe as any other car out there. In addition side curtain airbags are fitted in both the front and back. ISOFIX child seat attachments in the rear and a tyre pressure warning are on every Paceman.

Options? The Paceman is available in Cooper, Cooper D, SD and Cooper S versions and apart from the base model all come with an all wheel drive version. There is also a host of options to allow  you personalise your Paceman including six different upholsteries, three Colour Line options and four interior surfaces materials.

How about Fuel Economy? Our test car proves surprisingly frugal and returns 4.6 litres on a combined journey of motorway and city driving.  CO2 emissions are 122g/km so the motor tax bill is €270 annually.

Okay so the verdict? While purists might sniff at the idea of yet another MINI incarnation and worry about DNA dilution, jump behind the wheel of the latest version and it is MINI to the core. By removing the two doors it reclaims some of the classic MINI’s intimacy and fun. Room at the back may be limited so ferrying friends may not be a real option but you’ll be having so much fun upfront, you won’t want to stop to pick them up anyway.

Why you won’t? Pricey; Four seats only; Noisy