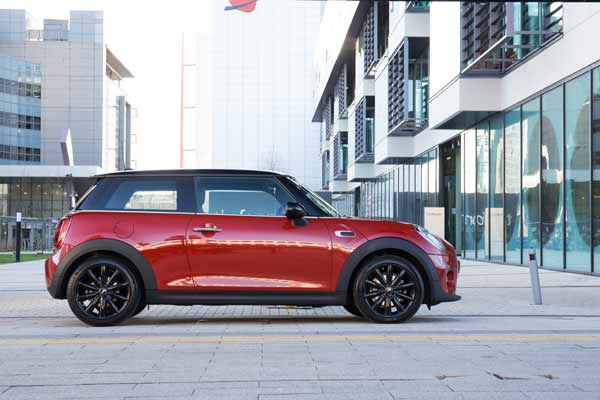 ‘The New Original’, a MINI that is distinctly familiar but enhanced in every single way

The MINI Cooper has just got even bigger but is it better? We went to the  twisting mountain roads of Mallorca to find out writes Geraldine Herbert

What is it? It may look pretty much like the old model but looks are deceptive and this new MINI has been completely revised  from bumper to bumper, inside and out,  all in the name of function, performance and style.

First impressions of the new MINI Cooper: The New MINI is also bigger, longer by 98mm it gains 44mm in width more than its predecessor but while purists may scoff at its expanding waistline it is still shorter than rivals such as the Audi A1, Volkswagen Polo and Ford Fiesta.  A new larger oval-shaped grille now dominates the front of the car flanked by new head lights and overall the bigger proportions give it a more muscular and masculine look.

What about the interior?  While the quality is much improved in the cabin it is also far more spacious, with better head, leg and shoulder room, especially in the rear seats so its now finally possible to carry some full-sized friends in the back. Luggage space is over 30 per cent more at 211 litres. There is an adjustable boot floor and a more useful 60/40 split replaces the original 50/50.

Ergonomics have never been  MINI’s strong point but changes such as moving the electric window switches from the dash to a more convenient location on the door armrests and  relocating the giant speedometer from the centre to directly in the driver’s eyeline certainly improves things. The traditional speedometer now houses a large 8.8-inch circular display centre console. There is also a miniaturised version of the BMW iDrive button  called the Mini Controller that works exactly the same.

And behind the wheel?  At the launch we had an opportunity to test drive two new versions, the petrol powered Cooper S and the Diesel Cooper D powered by a new three-cylinder 116bhp engine. 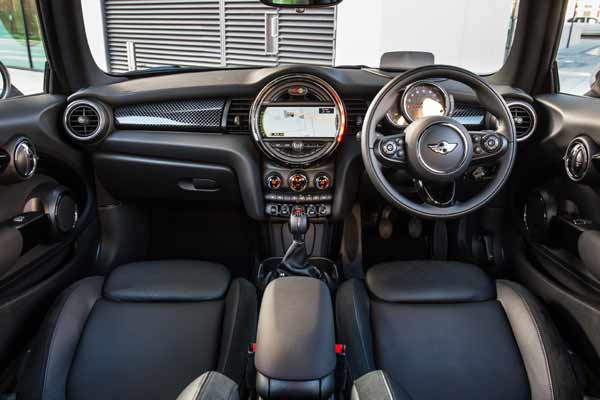 Inside the cabin, new technology ensures that the new MINI is the most connected car in its segment.

MINI Cooper D: Flip the new toggle switch starter and as it pulses red on ignition we discover there is nothing dull about the Cooper D and the new MINI is now even more comfortable. The chunky steering feels good but is slightly more detached than before but that said our Cooper is remarkably able. On the road it is torquey and lively to drive and the diesel grumble is barely audible.

MINI Cooper S: Next up is the Cooper S, the current flagship of the line up, on the road it is remarkably smooth in its acceleration and noticeable quieter than the  previous model. Low and flat this four-seater really stays planted on twisty roads. The new gearbox shifts quickly and responds smoothly and while the 0-100 time of 6.8 seconds is not a ripping speed, it is thrilling enough and accompanied by a distinctively growly engine note and the occasional exhaust pop and crackle,  it is super fun to drive.

How Much? The car was launched in Ireland on Saturday March 15 with a starting price of €20,500.

How Safe? In addition to the usual array of safety features the new MINI also offers Driving Assistant pack as a option that includes active cruise control, a collision and pedestrian warning system with active braking, plus speed-limit sign recognition. A rear view camera and parking assistant are also available for the new MINI for the first time.

What about my options: MINI first brought the concept of personalisation to motoring so its no surprise that there is huge range of interior and exterior customisable components available.