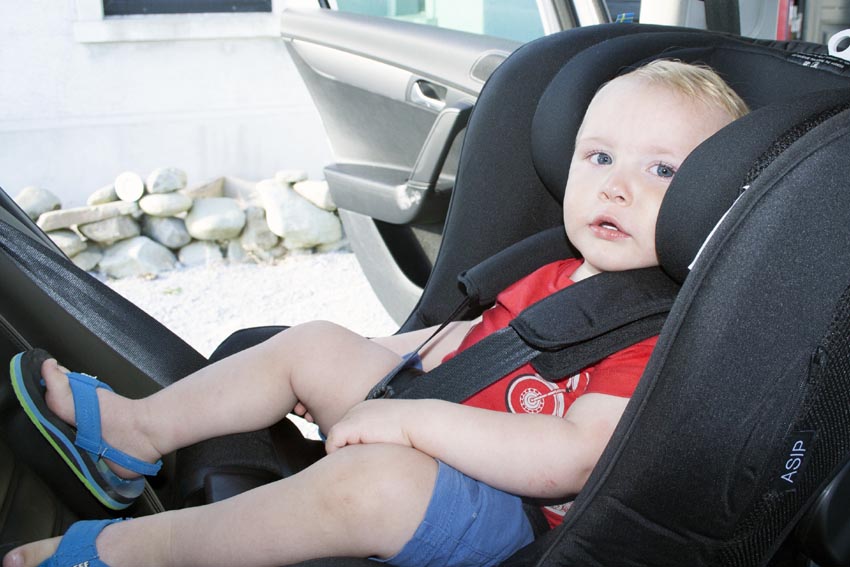 What is it? Axkid were founded in Sweden in 2009 – with their Swedish roots it’s not surprising that their main focus is child safety on the road and promotion of extended rear facing seats. They are so committed to the cause that they have halted development of any products which would encourage parents to forward face a child before they have outgrown a rear facing 25kg seat.

The Axkid Minikid has always been a hard hitter in the rear facing market and a new model, released earlier this year ensures that the Minikid will retain its place at the front of the car seat race. What’s unusual about the Minikid in comparison to rival belted seats is its use of a support leg which means it doesn’t need to brace on the seat in front – ideal if the front seats are adjusted regularly and ensures an easy fit in the middle seat of most cars.
The major changes with the new Axkid Minikid are that it can now be used from newborn (0kg) to 25kg (previously 9-25kg) and comes with innovative side protection device, ASIP (Axkid Side Impact Protection) for additional protection in side impact collisions which can be attached to the seat on whichever side is closest to the door. This device was developed in collaboration with a recognised crash institute in Germany.

What age group is it suitable for? The Minikid is suitable for rear facing from 0kg to 25kg and will allow children to sit rear facing – the safest possible option – until approximately 6 years old and 125cm tall. However, while it’s possible to use this seat for a newborn Axkid recommend the use of an infant seat until a baby can sit unaided.

How easy is it to install? The Axkid Minikid is quite easy to install and there’s no need for seat adjustments prior to fitting. However, if you’re unsure about any part of the installation Axkid have step by step how-to videos on their YouTube channel.

Depending on the leg room required by your child the Minikid can be installed right up against the rear seat back or pushed forward towards the edge of the seat! There are 5 recline options on the seat and an angle adjusting wedge is also available for cars with sloping seats.

What’s great about this seat is that it uses a ratchet system to tighten the tethers itself – Once you have connected the tether straps wiggle the seat from side to side and you will hear the straps tightening bit by bit.  Once the tether straps are tight you can drop the support leg into place! The support leg is operated with just one button but it’s important to tighten the tethers prior to dropping the support leg – another rookie mistake! Once the seat is solidly in place you can slot on the ASIP on the car door side. This isn’t necessary if the seat is placed in the middle of the car and depending on the size of your car you might need to adjust the position of the seat in the car to allow the door to close with it fitted. Iff it doesn’t fit on the first try place the Minikid on the seat with the ASIP in place and close the door, moving the seat sideways until your door will comfortably close. You can then fit the seat in this position.
What’s great about the Axkid Minikid is that there’s no need to adjust the harness height prior to installation. The headrest and harness will automatically adjust when the straps are tightened to suit the height of the child.

What about daily use? What’s great about the Axkid Minikid is how easy it is to use as an everyday seat. Of all the seats I have tested the strap tightening mechanism is the smoothest and while you tighten the straps you’ll also adjust the headrest and strap height to the optimum position – there is a lock switch at the top of the headrest so don’t be alarmed if the headrest height isn’t adjusting correctly when you take the seat out of the box first!

And safety?  The Axkid Minikid has passed the Swedish Plus Test which is one of the most rigorous tests that a child seat can undergo. It is also ECE R44/04 approved.

What about value for money? The Minikid is competively priced, by comparison the Diono Radian 5 is €399, Concord Reverso Plus is €459. The cheapest extended rear facing seat is the really basic Britax TWE which is around the €200 mark usually. You’ve to consider that these seats will do from newborn until an average of 6 years old.

Where can I buy one? Tony Kealys, Mothercare, In Car Safety and rearfacing.ie all stock the Minikid.

Why you won’t
It’s quite a bulky seat and the support leg makes it awkward to carry around.

Disclaimer – Wheelsforwomen was sent this car seat from Axkid to review, however all reviews are unbiased and honest. This is not a sponsored post.