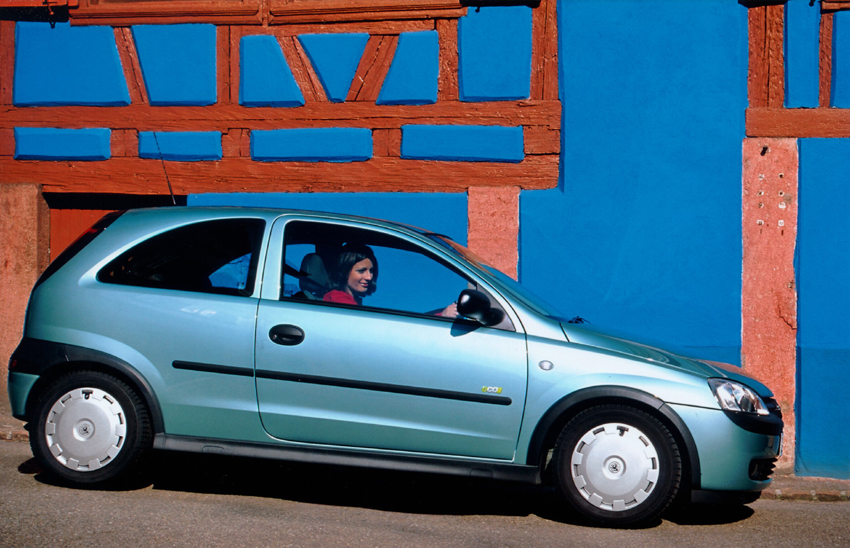 Sadly not Sinead’s car but one very like it!

What was your first car and why did you buy it?
My first car was a 1999 Blue Opel Corsa. I bought it with my first pay cheque from my first “real” job, straight after college. I wanted a Corsa as that’s what I was used to, having learned to drive in one, and was terrified of driving a car that wasn’t familiar to me – which is funny now that I’m in and out of different cars all the time with work.

What did you pay for it?
I saw the car listed on CarsIreland.ie (funnily enough) and it was up for €900. I brought my best negotiating tool (my dad) and together we bargained the seller down to €750. It was actually a bit of a steal at the time as it had a year’s NCT and was taxed for a few months too. The reason we got it so cheap was probably down to the massive dent on the passenger door which the guy said was caused by a renegade shopping trolley. I didn’t care though once the nuts and bolts were sound and I really just wanted something to get around in. I was more concerned with the colour! And despite the slagging I got I never did get that dent fixed, it became a part of the car’s character for me.

How did it change your life?
It gave me freedom and independence and meant no more from begging for lifts, or having to borrow other people’s cars and the nerves associated with that. The fact that I had bought it with my own money made it extra special to me. The first few months were a total honeymoon period, and I was happy enough to be a taxi for friends and family wherever they wanted to go. That didn’t last too long though…

What was the longest trip you ever took in the car?
I drove it to Ballycastle in Co. Mayo once and it got there on €10 worth of petrol!

What was your best memory or most memorable moment in the car?
I once reversed it over my brand new phone (a Sony walkman – top of the range at the time!) I still don’t know how I managed that.

How long did you keep your first car?
It had a bit of a sad end actually. I’d had it about a year and then when I was on holiday my sister asked if she could borrow it to drive to a wedding in Belfast. When I came home there was no sign of the car. Turned out she had driven it with the engine management light on (and flashing) and the engine had given up on the M1. The head gasket had gone (not worth repairing for what the car was worth) and so I had to have it towed and scrapped from where it was. So I never got to say goodbye. Needless to say I don’t let people borrow my car anymore!