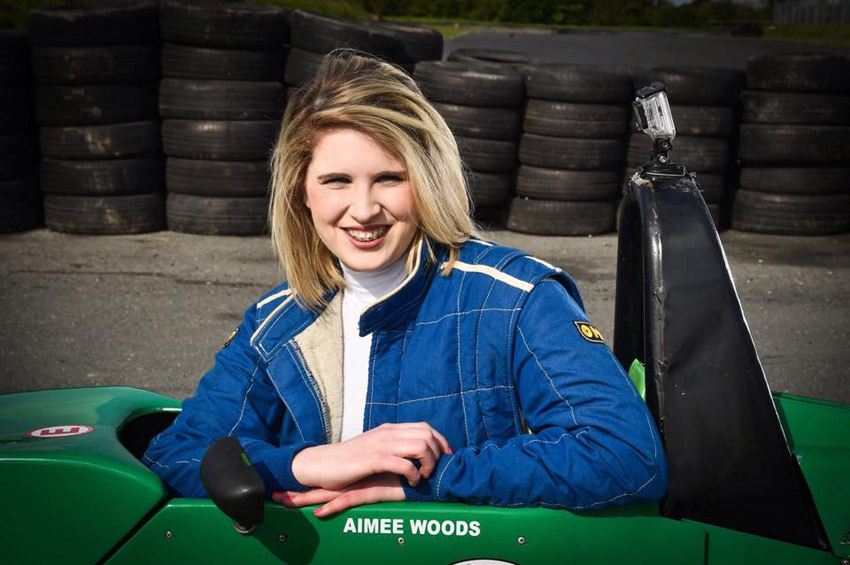 Buckle Up! Aimee Woods joins us as a regular contributor with her own column, the Inside Track, we follow her progress through Formula Vee plus Aimee will be sharing her tips and advice, as a racing instructor.

It’s almost June and the mid-season madness that every championship brings is in full swing and I’ve deemed this the appropriate time to dive straight in. Having been certain last March that the 2015 season was not my year to undertake a new project, I now find myself digging out the racing gear and contemplating my own sanity. One of the many perks of being a female is that we reserve the right to change our minds and I have done just that through the acquisition of a rather fetching Formula Vee.

In July 2014, I was given the opportunity to take part in the annual Formula Vee Festival in what is now my very own race car. Having had very limited track time in the single seater, I found it challenging (to say the least!) to manage the pace within the class. Thanks to the tireless efforts of Ken Elliott over the weekend event, who both prepared the car and provided patient, relentless instruction, I went home feeling a little more than curious about venturing into the world of single seaters.

My own family are no strangers to the world of motorsport and at the tender age of two weeks old, I attended my first rally. More than a few are familiar with the racing career of my Father, Sean Woods. In the 90’s he became a household name in the Fiat Uno, Punto and Abarth classes whether racing or preparing cars for his team, Sean Woods Racing. As a result, Mondello Park became a second home to the Woods clan and I spent the majority of my childhood as a spectator of the sport (and indeed a sandwich maker for the team).

Following in his footsteps, I commenced my own racing career in 2010 when Leo Nulty very kindly offered me a drive in his Fiat Uno. Unfortunately, the Fiat class was slowly but surely depleting after years of action-packed racing which resulted in the discontinuation of the championship. Having had a taster in saloon racing, I then turned my hand to participating in Rally Sprints run by the RallySport Association in my own Peugeot 205 which was developed and prepared by Sean Woods Racing. As a student, being consistently on the track proved almost impossible for me due to a lack of available finances along with the hefty price tag attached to the sport. This often resulted in making Summer appearances to track as my budget never lent itself to participating in a full championship.

This year, the SWR team have ventured in to the preparation of the stunning Seat Leon race cars that have joined the Irish Touring Car Championship. I reckoned I’d have to wait until I had a bigger bank balance before potentially putting one of those on its roof and thankfully, I still had my mind set on the challenges that Formula Vee brings. Believe it or not, my thought process on buying a new car at this stage does in fact have some degree of logic. With all the difficulties (and there were many!) I had faced last July in getting to grips with the different driving style of the Vee, I figured that I would give myself the second half of the season to get to know the car without placing an unrealistic target upon what I wished to achieve in a season. My aim is to enter the 2016 season as a competent single seater driver and hopefully have a good crack at the B championship and I don’t intend to go down easily.

With that, enter Sheila! The prettiest and most expensive accessory I have ever and will ever buy.  (Yes, of course I named my car, why wouldn’t I?) Here’s hoping that Sheila and I under the watchful eye of Ken Elliott will be the first female team to win a Vee race in Ireland. We’ll be making our first appearance in Mondello Park on the 11th and 12th of July, see you there!