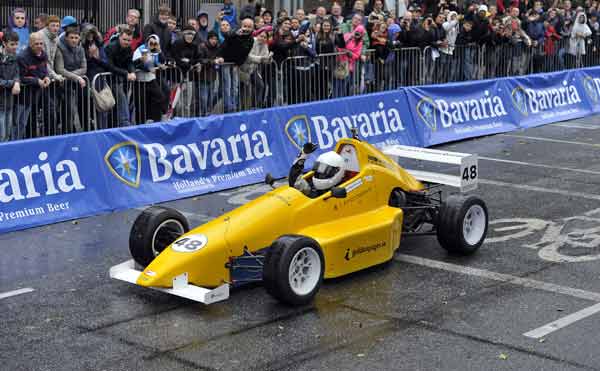 We follow Jennifer’s progress through the Formula Sheane Championship.

Since joining Formula Sheane in May 2012 life as a racing driver has really taken off. Just one week after becoming the first ever woman to race in Ireland’s fastest one make series in Bishopscourt Co.Down, I got a call from the Bavaria City Racing organisers inviting me to demonstrate my Formula Sheane through the streets of Dublin City Centre. I was the first ever girl to take part in one of Bavaria’s events. Being a part of this event opened lots of doors for me, which enabled me to secure the backing of www.goldenpages.ie for the remainder of the 2012 Formula Sheane Championship.

Once everything settled down after Bavaria it was time to get focused on my first Championship race in Mondello Park on Sunday 10th June. I am using 2012 as a learning year for a full assault on the championship in 2013, so I was very excited to take to the track on Saturday for pre-event testing and start learning the car properly. Unfortunately the day did not progress as much as I had hoped for, leaving me scratching my head wondering what to do next to get closer to where we needed to be in terms of pace. On Saturday night, I had a chat with some of the other more experienced drivers in the championship who were happy to offer lots of advice on where to improve. I was quite nervous going into qualifying on Sunday morning, but I just had to get my head down and give it everything I had. I qualified 10th on the grid for the afternoon’s race and I had taken three seconds off my time from the previous day which was just what we had hoped for and it left me with loads of confidence for the race knowing that I could improve further.

In the afternoon it was race time and as I queued up in paddock assembly the nerves set in once again, but as soon as we rolled out on to the grid they were a distant memory and I was focused on what I had to do in the race. I got a good start from the outside of the grid but unfortunately got caught out on the way into the first corner allowing a few people to get by up my inside. I set about chasing them down and I managed to work my way back up to 8th place at the chequered flag and with it I took a further second off my previous best lap time.

The weekend finished very promisingly and now I can’t wait to get back out in the car and keep on improving.

The Formula Sheane Championship continues in Mondello Park on July 21st & 22nd for Rounds 4 & 5 of the Championship.