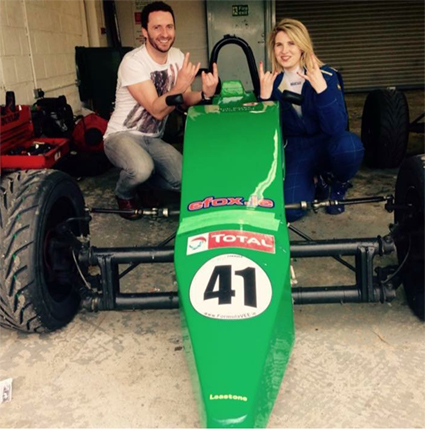 Leaping out of bed at 6am on a Friday morning generally means one thing. It’s race weekend. Having built up to the event for almost two months, I was pretty ecstatic to get behind the wheel again. Upon my travels to Mondello Park in the early hours, the butterflies (not the good kind, the nervous kind – or moths as I prefer to call them) began to kick in. Thankfully I tuned in to 2fm, where the dulcet tones of the ever so dreamy Bressie (starring as a guest DJ alongside Eoghan McDermott) were most definitely a calming influence. I even took my opportunity to appear very cool and sent a text to the show telling him about my weekend’s quest that I was embarking upon. I also suggested that he popped down for a spin, which he kindly turned down due to the severe issue of being 6 foot 6 inches tall – how awful for him. Despite being rejected on national radio, I was still feeling rather optimistic.

Although I would count this weekend as my Formula Vee debut, I also participated in the Vee festival held in July 2014 as a drive became available at short notice. Last year, every time I sat in to the car I would become so nervous that knowing my own name could be considered a challenge (it’s called being nervous, not blonde). The major difference that I felt this year was being comfortable in the car and starting to get some real fun out of it. I started the morning session on new tyres which needed bedding in, so there was no pressure on me to get a time out of the car. In my mind, I was getting out there to carefully bed in the tyres and ensure that I didn’t slide off the track altogether. That was my mission – and Voila! I came in and registered my fastest time in the car yet. Before getting excited, this time was still at least five seconds off the pace, which most would not count as an achievement. I, on the other hand gave myself a high five. Having completed a half day’s testing, I had managed to get down another second and was rather happy with the day on a whole. I suddenly felt as though I really wanted to be faster and faster without feeling the fear that had consumed me on previous occasions. The biggest issue of the day was the communication between my brain and the loud the pedal. My brain is shouting “GO GO GO”, but my right foot has severe commitment issues! I contemplated whether to complete the full day’s testing, but I’ve learned that I often fair better to allow myself to digest the times of the morning and take the evening to plan where I can improve for the next day.

I was also involved in a little photo opportunity with E. Fox Engineering Ltd who was launching their “Chequered Flag Sponsorship Scheme”. Superbike Champion Brian McCormack was also involved in the campaign and he kindly informed me of the times reached on the bikes around the national circuit. These times were over ten seconds quicker than I had ever reached in my Vee, so that was a little inspiration to try a lot harder. For a little more inspiration, I totally went home and watched Rocky IV. 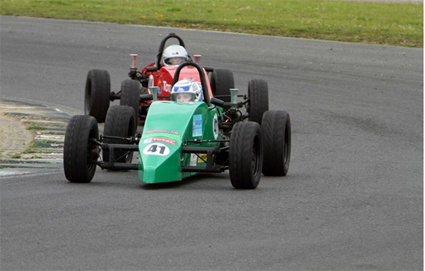 The paddock was buzzing from the early morning and I felt the moths kicking in again. Qualifying is most definitely my weakness and it was not something I was particularly looking forward to. In true 21st century style, I must have checked the weather app on my phone every ten minutes in an attempt to predict the conditions. God forbid actually looking out the window. Having already resigned myself to the fact that I would be at the back of the grid, I again acted like a true lady throughout qualifying. The track is possibly the only place that I would ever refer to myself as a lady and to all ladies reading this, it is a massive flaw. I think a true sports person recognises when they are learning and allows sufficient space for those who have championships at stake. In spite of this, I slightly freeze at the notion of spoiling someone’s victory and give far too much room to those who are faster. On the flipside, when you don’t give space, the lads will find a gap (I learned this lesson from my fellow Mondello instructor Mark Reade – thanks for the heart attack!) Although, when the likes of Kevin Grogan and Ray Moore speed by, it’s a great opportunity to follow on and try to stick with them for as long as possible. I felt really determined to try as hard as I could and definitely improved in managing traffic. The end result did leave me at the back of the grid but many lessons were learned, most importantly – time to get more aggressive.