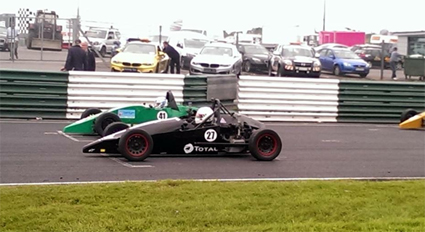 The weather had been slightly unpredictable throughout the day and as luck would have it, the miserable Irish weather raised its ugly head just in time for the Vee race. My Father, Sean Woods is a true hero in the rain and always manages a podium in the difficult conditions. I am the polar opposite and whatever chance I have of gaining a few places is completely destroyed in the rain. Race one began which involved drivers of the B championship and non-registered drivers with me starting at the back of the grid. Thankfully, there is definitely one racing technique that I can handle which is getting a decent start. Today was no different, lights out, cat-like reflexes, we’re off! And then disaster strikes, third gear has gone on a tea break. It’s disappeared – gone. Furiously pummelling the gear stick, I eventually realise that the moths had again taken over my brain. Third gear is in fact patiently waiting for me to stop acting like an idiot. Before I sound like a woman who cannot in fact drive, it is important to point out the Formula Vee is notoriously tricky to get gears in and actually takes a bit of practice. I made it around for a few laps before losing the pack in front and essentially embarking upon my competition with myself – to stop being terrified of the rain and keep hammering down the times. The Vee race was more than eventful with plenty of carnage resulting in two re-starts. This gave me more practice in trying to dive in on the action in the initial stages of both re-starts which I thoroughly enjoyed. Having started 15th on the grid in this race, I managed to finish 9th It pays off to keep it on the black stuff! Unfortunately for me, my dream has been realised by Paula Moore who fought hard to achieve first place, the first female to do so. Massive respect and congratulations to Paula for doing so and I hope to follow in her footsteps soon. 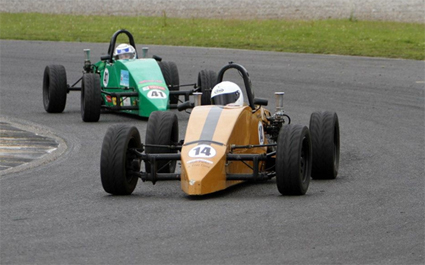 With the rain holding off for the rest of the day, I began to feel more confident about the second race and hoped that it could be a little less lonely for me this time. Of course, psyching myself up in the assembly area, the rain began to trickle down my visor and instant fear gripped me. This time, I refused to give in to my ridiculous notion that the rain might just kill me. During the warm up lap, it’s important to check out the level of grip on the track and to my surprise it was completely fine despite running a dry set up. Again starting from the back, I had resolved my issues with third gear and had a cracking start getting ahead of four cars off the line. An instinct that I hadn’t felt for a while took over. This instinct I can only describe as “stay the f**k behind my car”. Holding off the gang behind me for two laps, I was having a ball! It all came flooding back to me, I love racing! I love being competitive! This is awesome! Completely forgetting the falling rain I stormed in to turn one at full speed and.. swoosh! Straight in to a spin I went. Normally, this would be the point where I beat myself up, stall the car in anger and realise I can’t get going again. Not this time, I got going straight away and furiously headed for turn two. I had of course lost my little gang that I was battling with and found myself behind Kevin Grogan who had unfortunately found himself off in the same turn. I was rather delighted with myself for following him closely for over a lap until I realised that this was as a result of the yellow flags around the track. Oh well, a girl can try. Unfortunately, my vision was severely compromised in the rain and I realised I needed a new visor for the next round. It became impossible to have a clear picture of what was ahead which resulted in me furiously wiping my helmet for most of the race. Finally finishing in 17th place from a grid of 22, I was pretty chuffed. Regardless of the misfortunes, I really enjoyed myself and felt as though I was getting my game back. Ken Elliott has always reminded me that for now, I am in competition with myself to do better than I have done before and I think we achieved that this weekend. Despite feeling slightly defeated, I was approached later in the day by Paul Heavy, who awarded me with second place in the Finol Oils Star of Tomorrow Championship which provides awards to newcomers. It is such an encouragement to those entering in to the Formula Vee family and totally lifted my day! 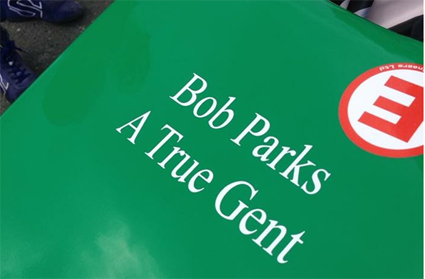 The most important aspect of the weekend was to raise essential funds for the Laura Lynn foundation, which provides hospice care to children. As a social worker, it is a cause close to my heart and Mondello Park made a wonderful contribution by offering free entry all weekend, a fabulous auction and BBQ enjoyed by all.

To make my own contribution, I gave 50 euro to the charity to obtain pole position in the Sunday race. As it was a non-championship race, the grid was decided by picking race numbers from a hat and I was unlucky enough to originally receive a second last grid position. Well done to Adam Macauly who had the idea to auction off pole position which he had acquired. My racing mentor Ken Elliott and I also participated in the 5k fun run for the charity on the Sunday afternoon which we used as an opportunity to walk the track and discuss racing lines. Well done to all who managed to actually run it! In all honesty, there’s not a lot to report from me in the non-championship race. It was an awesome photo opportunity and a great experience to start from pole with my lead lasting for all of around 15 seconds before being swallowed by the rest of the grid. Oh well, thanks to David Hall I now have an awesome picture starting from pole and it’s certainly something to aim for soon.

Hunger has been the theme of my weekend. Hunger to improve, hunger to win, hunger to achieve more. Most importantly, genuine hunger. I had completely disregarded food for almost the entire weekend and ate less than a baby bird. This is not a winning strategy and I will be aiming to put the nerves away next time. My fabulous wing man, James Mackin had even prepared several packed lunches for the weekend – A man, making lunches! Probably best I preserve those anyway as I doubt it’ll happen again soon!

Having watched cheesey action films all week to prepare myself, my last thought is, “I’ll be back”.

Thank you to all the Formula Vee family for the advice and support over the weekend, especially the ever patient Ken Elliott for preparing the car. It is also fitting to remember Bob Parks who recently passed away. He was an important part of the Formula Vee community and will be sadly missed, but fondly remembered.