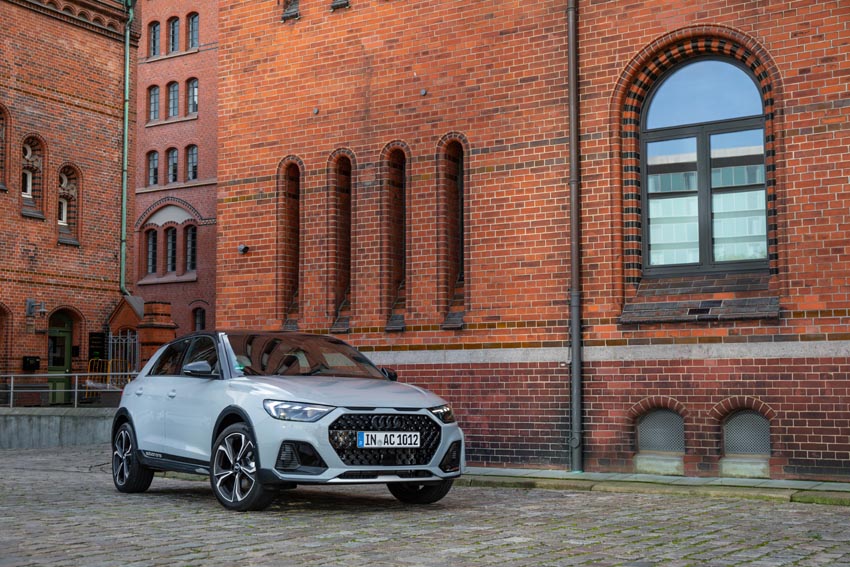 The Audi A1 citycarver stands out from the crowd

What is it? The A1 Citycarver is a rugged version of the classic A1 city car. Made for the ‘urban jungle’, this mini SUV has special features such as a raised ride height (50mm over the standard A1), an octagonal grille and muscular black wheel arches similar to its bigger brothers in the Q range. There are two engine options available – the smaller 116PS 1.0 TFSI (30 TFSI) which we are trying, and a 150PS 1.5 TFSI (35 TFSI) engine.

First impressions? ‘Robust’ is how Audi summarise the Citycarvers styling, but we’d say it’s verging on over the top. With bonnet inserts, a honeycomb grille and a bulbous rear bumper, the Citycarver is no shrinking violet. It’s a smart compact option with appealing SUV elements, but its looks won’t appeal to everyone. Our press car had probably the most subtle combination going – a ‘glacier white’ exterior with black and silver trim and ‘granite grey’ novum cloth interior.

What does it drive like? It’s safe to say that all modern Audis have a similar driving feel; they are solid, smooth and reliable. The A1 Citycarver 1.0 TFSI feels like all those things, but in compact form. With a smooth manual gearbox and a 116PS engine it’s nippy enough for day to day driving (0-100 in 9.9 seconds), but where this car really impresses is in poor conditions. Because of its elevated ride and well-judged suspension, the Citycarver copes excellently in wet weather and on damaged roads with potholes. You feel safe and secure. That’s without Audi’s all-wheel drive quattro system too.

It also has the added benefit of being nimble and easy to drive in confined spaces because it has excellent steering. It is a confidence giver to park and would be perfect for a learner or new driver; with the added height, clear cabin and fool proof parking system you can fit into the tiniest of spaces.

However, we did run into issues with the car’s integrated safety systems which were hard to ignore (especially as the lane departure system makes the driver’s seat vibrate). Both the lane departure and collision warning alerts came on erratically, confused by common scenarios such as potholes, overtaking parked cars, three lane roundabouts and old markers on the road. 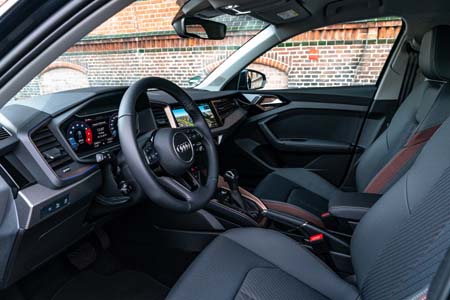 Inside it features cutting-edge infotainment

What’s the inside like? Inside is spacious, comfortable and secure, but not exciting. The interior in the Citycarver is the same as the standard A1. The mock carbon fibre effect on the dash looks funky, but generally there was more plastic than we’d like, especially on the doors which lacked that signature Audi chunkiness. We also found the seats a little hard.

However, the positives out way any niggles. With rear seats and a boot (335-litre capacity) that feel like they belong to a much bigger car, there is enough room for a small family and their belongings for a short or long journey.

Another huge plus is the A1’s impressive infotainment technology. The Citycarver is well equipped inside with a fantastic sat-nav and entertainment system – one of the best we’ve ever used. The 8.8-inch touchscreen is easy and intuitive to use, with seamless Apple CarPlay integration.

How’s the fuel consumption? A week’s worth of city driving (average speed of 20mph) in dynamic (sport) mode returned 40mpg.

Options? Like most Audi models, the A1 Citycarver has an array of options. These include nine exterior shades, with two contrast roof colours. One additional extra to consider is Audi’s brilliant virtual cockpit system (€212).

Verdict? The A1 Citycarver is a good option for those looking for a compact car with a distinct style. It’s safe, solid and enjoyable to drive. It also has one of the best entertainment systems on the market, a reason for many to buy this car alone.

The Audi A1 citycarver

Freelance lifestyle writer, trend forecaster and digital consultant Ginny Weeks has contributed to a range of titles (both online and in print) including Psychologies, Coast, MSN Food, MSN Her, MSN Cars, MSN Travel, Harpers Bazaar, Top Gear and 1883 magazine. You can folllow Ginny on twitter @GinnyWeeks