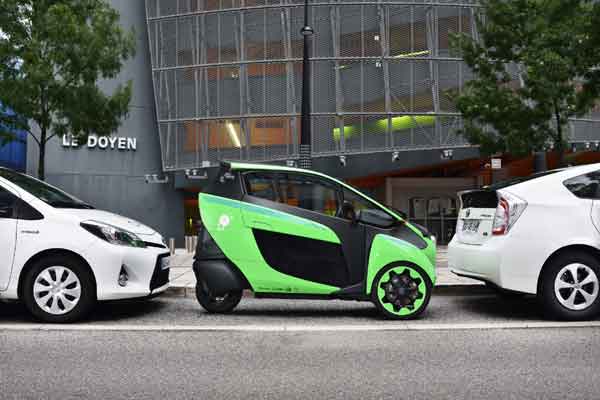 With three wheels and two seats Toyota’s new I-Road is unlike anything else, we went to Grenoble to test out this three-wheeled vehicle writes Geraldine Herbert

What is it? The ultra compact electric vehicle i-Road blends the agility of a motorbike with the comfort of a car.  It is built around an aluminium space frame with a plastic body and weighs just 300kg. From October 1st it will be part of a car-sharing project based in the city of Grenoble. Through an app you can reserve and pay to use an i-Road. Then you simply pick it up and then leave it charging in a designated spot for the next person to use it

First impressions of the Toyota i-Road? It is tiny at only  2.35 meters long and 85 centimeters wide and  is actually narrower than a motorbike and slightly bigger than a scooter.

How does it work?  The i-Road’s zero-emission, all-electric powertrain features a lithium-ion battery providing power to a pair of 2kW electric motors that are mounted within the front wheels. It has a range of 50 km, a top speed of 45km/h and it takes about 3 hours to fully recharge.

What about the interior? Inside it is fairly spartan, there is a steering wheel, accelerator, brake, and a USB port for mobile devices and that’s about it. The  transmission is marked the familiar R, N and D and there is a key-like knob to actually start the vehicle. Behind the driver’s seat there is also just about enough room to accommodate a child. 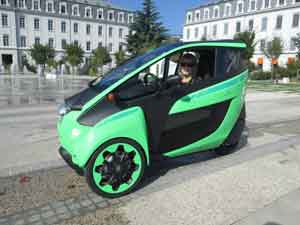 And behind the wheel? Behind the wheel the i-Road feels like you are sitting in a conventional car, albeit a small one. Once you turn it on it performs a series of diagnostic tests so you need to turn the steering wheel as it finds the perfect balance point so immediately its clear this is no normal car. Take it on the road and it is entirely different to anything else, it leans and swoops from side to side like a scooter. The steering wheel controls the single rear wheel rather than the front wheels so when you turn into a corner the back end of the i-road moves out in the opposite direction to where you want it to go. It also leans towards the curve when you go around bends or corners but it is very easy to get to grips with and is really fun to drive.

How Much?  There are no plans to put it into production and sell it commercially at the moment. The trial in Grenoble is for three years after which Toyota will assess the feasibility of rolling out the i-Road in other cities.

What about my options:  In addition to the i-Road, there is also the Toyota COMS, which is a smilar idea but comes with four wheels so is aimed at those who would like a more car like experience

For more information check out Toyota.ie or the Toyota Ireland  Facebook page or take a look at the video below

New And Affordable Way To Buy A Toyota