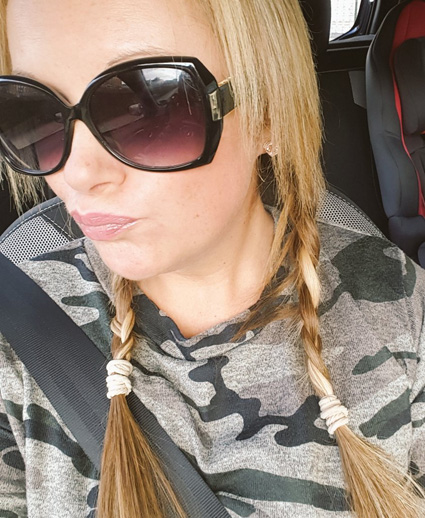 Our Guest Reviewer,  DJ Nikki Hayes has been checking out the Toyota C-HR
One of the things I always look at these days when test driving cars is how it would suit my family. A three year old toddler, 2 dogs and there’s always a need for space. When I pulled up to Toyota in my very uncool but in fairness reliable Ford Focus, I caught sight of the C-HR parked for me in the pick-up area. It was very slick looking and definitely a car that would make heads turn. It was 5 door but it looked like a 3 door. The clever curving of the C-HR had the door handles opening from the top on the back doors which was a very cool feature as it definitely gave a more sporty look.

The model I picked up was white, an XLE premium model which came with all the trimmings. The interior was brown leather which gave it an instant look and feel that you were in a top spec car. The C-HR is hybrid which meant driving around the city was very calm, the no noise factor of hybrid is winning me over more and more. From other hybrid models I have driven this year, I have learned that hybrid = fuel economy but how do they handle on long journeys? In my head, there’s only one way to find out. I decided to take a run down the M9 to Cork from Dublin to see how it handled. The C-HR packed a punch in the city but when on the motorway I felt it screamed for another gear. I also noticed that on the open road it didn’t drive as long on ‘ECO mode’ or recharge as effectively as it did in the city, so fuel consumption was greatly affected. This doesn’t take from the CHR, just something to bear in mind when you’re buying one. What am I using it for? What journeys will I be taking regularly? If you don’t have hundreds of kilometres to do every week, well the CHR really does tick the boxes.

Space wise it was compact. I did have room for my daughter’s seat in the back but I couldn’t see a large family in this car, to be honest more than 1 child might be a bit cramped. The boot space was enough for my shopping bags and buggy so I was more than happy with that.

The drive was smooth and I felt less stress due to the hybrids quiet engine. At first I kept forgetting the engine was even on. It handled well on city roads and comes with a lane alert so if you’re stuck in traffic and slightly lean into the next lane the alarm will sound to make sure you’ve no little bumps. Unfortunately on long distance I felt that the Hybrid CHR was so light you didn’t have that confidence that it would handle and stick to the road. Also long journey as you increase speed the hybrid can roar until it gears up which feels like unnecessary noise but that’s probably because overall hybrid is so quiet, any noise seems out of the ordinary.

Unlike some other SUVs in its class you feel a little lower down. This has its benefits as you tend to drive it more like a car than a jeep. The layered dashboard makes accessing controls easy and stress free. The sat-nav on-board was easy to use and quite accurate which some on-board maps are not. Parking sensors help with tight spaces and it even comes with a self-park feature which when you use feels odd but also futuristic and it works. The sat-nav also comes with a traffic monitor and speed limit forecaster. So as you go along different areas you are aware of what the speed limits are ahead.

The glove box didn’t fit more than my insurance and car documents but there is more than enough space in the centre console for bottles of water, sunglasses etc.  Automatic wiper and light functions add to the ease of the CHR, small things do make the difference and the good thing is with this model they come even with the more basic models. The pre collision control means if the car identifies an obstruction it will automatically slow you down and ensure you don’t collide with another car or pedestrian. This is a fabulous addition to some of the newer vehicles on the road.

Would I recommend the C-HR? For me I loved the look, I loved the ease of drive in the city but I would stress if you put up a lot of mileage it wouldn’t be as economical as other makes in its class. Space wise it was good for a family of 3. Two adults and one child is perfect, but any more than that and the low height of the roof at the rear would make back seat passengers feel a bit cramped. Good thing is with the C-HR you don’t need the high spec to get the benefits as many features come as standard. If I was given one today would I be happy? Yes, it looks awesome and drives the same. Would I buy one? I would give it serious consideration but if I was expanding my brood it just wouldn’t be the best option.

Gorgeous car though and I’d give it 4/5, only let down by the long distance economy.

Nikki Hayes is a DJ on SPIN 1038. and 4FM. She is a regular contributor and Public speaker on a range of issues and is a Mental Health Activist. You can follow Nikki on twitter @nikkihayes