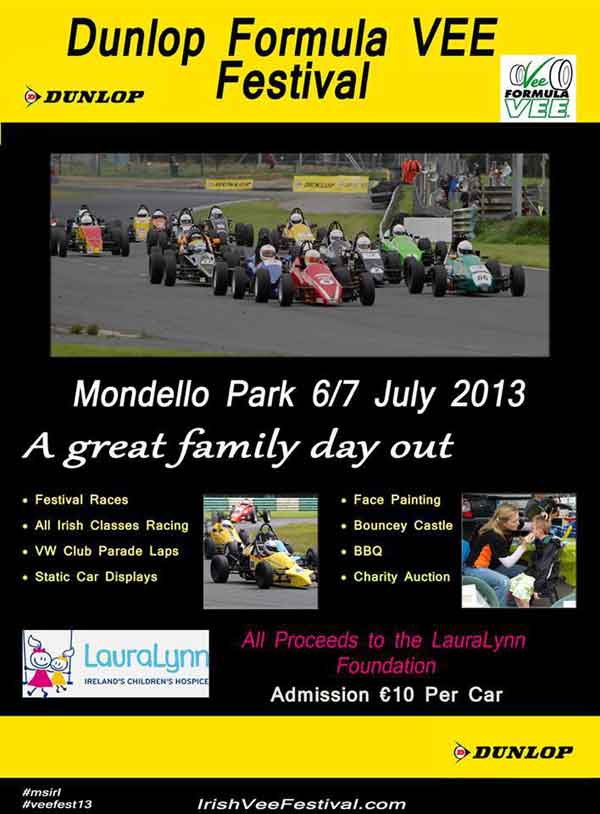 Taking place at the Mondello Park, Naas, Co Kildare on  July 6/7 ,  Irish Formula Vee, in conjunction with Dunlop Tyres are holding the 2013 Irish Formula Vee Festival and all proceeds from the weekend are going to the LauraLynn Children’s Hospice for children with life limiting conditions

Gate receipts and programme sales along with the proceeds of a charity auction (MC Leo Nulty of motorsport.ie fame) on Saturday night will see funds going directly to LauraLynn Children’s Hospice. In addition to the auction, there will also be a barbeque on the Saturday night in the bar at Mondello Park. For the younger fans, there will be a bouncy castle, clowns, face painting and balloon making on the Sunday to make sure this is a full family friendly event. The paddock will host an array of supercars and maybe a Formula 1 car or two. The fun filled weekend will see championship racing on both Saturday and Sunday from classes such as Formula Libre, ITCC, Formula Ford, Ford Fiestas, Historics and more; all culminating in the Formula Vee Festival final on Sunday afternoon.

We’ve got 10 groups of tickets to give away for Sunday. If you want to win a group ticket,  just leave a comment below. Good luck!

Winners will be announced on Tuesday 2nd July, 2013

Fun in the Mud – Off-Roading at Mondello