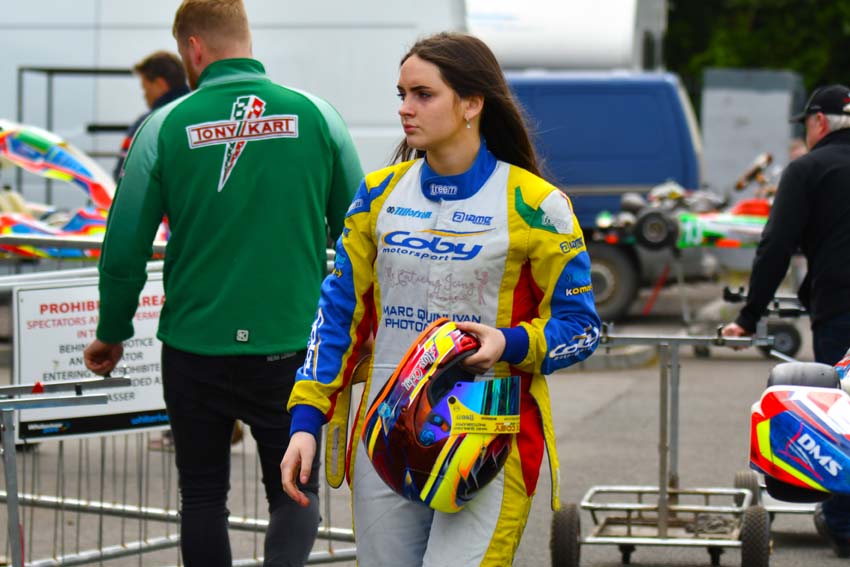 Alyx Coby at Round 3 of the Motorsport Ireland Karting Championship. Photos: Marc Quinlivan

14-year-old Alyx Coby, from Newbridge, Co. Kildare, was back on the grid at Whiteriver Park in Co. Louth last weekend as the Motorsport Ireland Karting Championship made its way to the circuit for the third round of the series.

Following a disappointing weekend at the last outing in Galway, Alyx was eager to return to the form she showed in the opening race of the season. Racing in the IAME X30 Junior class, for drivers aged 11-16, Alyx started the first heat in 14th position and quickly made her way through the pack to run in 8th place by the end of the first lap, picking up one more spot by mid-distance. She was then locked in a close battle with the karts ahead for the remaining laps and took the chequered flag in 5th place.

The reverse grid for the second heat saw Alyx line up for the start in 3rd place. A great start saw the Newbridge
teenager take the lead at the first corner and with the chasing karts getting involved in their own battles, she pulled out a comfortable margin to the rest of the field in the opening laps and cruised to victory by almost two and a half seconds. This left Alyx in second place on the grid for the first final of the day where she managed to defend the position through the opening laps before dropping one place to 3rd. With the top three evenly matched for pace they pulled away from the rest of the field but, despite a couple of attempts, Alyx was unable to find a way through and finished the race in 3rd place.

That result saw the second year student from Gael Choláiste Chill Dara start in 3rd position for the day’s main final.
With a good run into the first corner, Alyx was up into 2nd place and held the position for the first two laps before
dropping back one position. Once again the top three drivers were evenly matched and pulled out a gap to the rest of the field and Alyx remained in third place to the finish.

With her two podium finishes Alyx has moved back up the points table, and with dropped rounds taken into account she sits in 4th place in the Championship, just 8 points off the lead. The series now takes a five-week break before travelling North to Nutts Corner in Co. Antrim for round 4 at the end of June.