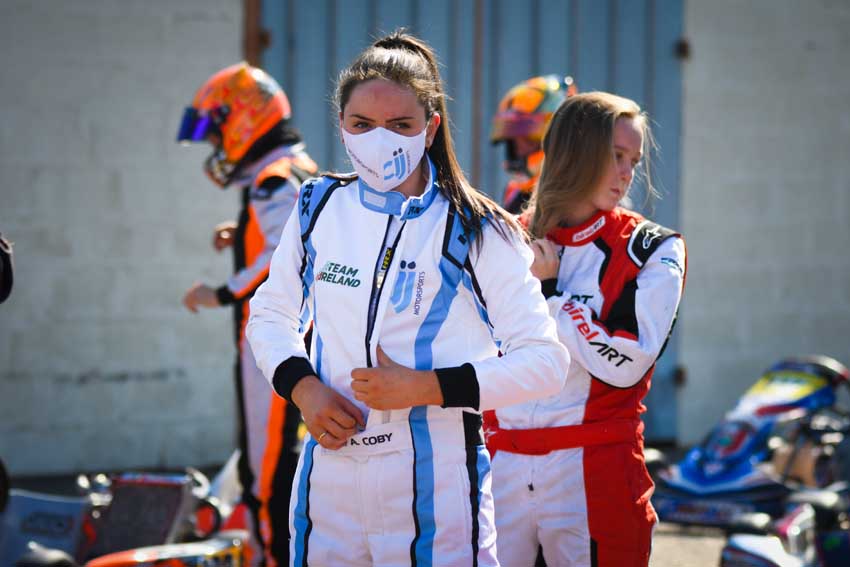 The event, organised as a one-off race during the second round of the French National Karting Championship, featured an all-female grid of twenty-one drivers between the ages of 14 and 18. Now in its second year, the event draws the top female drivers from across Europe.

Alyx was delighted to receive the support of the CJJ Motorsports team to compete at this event. Founded by Irish-American businessman John Campion and his wife Suzanne, CJJ Motorsports aims to support the next generation of Irish racing drivers, giving them the tools they need to further their careers in motorsport.

Having never raced at the French circuit before, Alyx had five practice runs on Friday to familiarise herself with the track. After running the new engine in for the early stages of the first run, Alyx was immediately on the pace in the second run, setting the fastest lap of the session – a good sign for the weekend ahead!

Saturday began with a warm up before the all-important qualifying session. A good qualifying position was going to be crucial as this would determine starting position for all three of the afternoon’s heats. The high speed layout of the 1500-metre-long track, with three long straights and only five braking points, meant it required careful planning in order to be close enough to the kart in front to get a tow down the straights but not too close to get blocked in the corners.

In a tightly fought contest, Alyx qualified in third position, just sixteen hundredths of a second behind the leader, with less than a second separating the top eighteen drivers.

After falling back to fifth place at the first corner in the first heat, Alyx made her way up to fourth my mid-distance and, with a close three-way battle for third place for the remainder of the race, finished in that position.

With the pole driver making a slow start in heat two, Alyx dropped to fourth place before regaining third by the end of the opening lap and moving up to second position one lap later. A string of fast laps then saw the top three open a five second gap to the chasing pack. Alyx successfully defended second place until the final lap and took the flag in third place.

The third heat began in the same way as the second with Alyx dropping back to fourth place, however engine issues towards the end of the race meant she was significantly down on power and came home in eighth place.

Despite that result, Alyx’s earlier good finishes meant she had secured second place on the grid for Sunday’s pre-final. Only France’s Luna Cleret, winner of all three heats, would start ahead of her.

Sunday’s warm up session showed that the engine issues from heat three were still there, but with some kart setup changes it was hoped these could be overcome.

As the pre-final got under way, in what became a recurring theme, Alyx once again came out of the first corner in fourth place before climbing back up to third by the end of the lap. With the leader pulling out a comfortable gap at the front, Alyx was in a five-way battle for second place for the closing stages of the race, eventually crossing the line in fourth place.

With a four-hour break before the final race of the day it was time once again to work on kart setup and try to find some extra performance to overcome the power issues.

Alyx had to take avoiding action at the first corner in the final as the karts ahead came together and she fell back to sixth position by the end of the lap. With the lead two karts opening up a significant gap in the early stages, Alyx climbed to fifth place by mid distance and was in a group of five karts battling for the final podium position. While making a pass for fourth place with two laps to go another driver closed the door and unfortunately Alyx was forced to retire with a damaged rear wheel. The race was won by eighteen-year-old Caroline Candas, regarded by many as the best female kart racer in France.

While the final classifications show Alyx finishing in eighteenth position, the Newbridge teenager was happy with her performance and takes home many positives from the event.

Unfortunately, the trip to France meant Alyx had to quarantine on her return to Ireland and was unable to compete in the first round of the Motorsport Ireland Karting Championship but she is already looking forward to getting back on track