If I am to be completely honest, I wasn’t 100% sure of how I felt about W Series when it was first announced. The reason for this was purely one thing – I didn’t believe in a benefit from gender segregation within Motorsport. When I look back now I consider this quite a close-minded statement but after thirteen years being involved in Motorsport and fighting to be seen as an equal, I just couldn’t see all the positives the W Series was predicting.

What is the W Series?

However, I was intrigued and followed the progress of the series right through from the driver selection process to every free practice session and race. I began to follow numerous young female drivers who were selected for the series on various social media platforms to learn more about how they were benefitting from earning a place in this new all-female F3 championship and from very soon on it became evident how much these already talented drivers were benefitting from the championship.

It’s fair to say that early on in the season my attitude towards the championship changed to more of an auspicious perspective and I was interested to see what was to come. Firstly, and what I as a race driver myself would consider the most favourable part of being awarded a seat in this championship, is that each drivers entire seasons racing is covered financially. The cost behind getting behind the wheel and out on track as most of you know can be hugely expensive and sponsorship can be challenging to get so a free seasons racing is like winning the lotto for these young female drivers! They each have their own car (Tatuus F3 T-318) and a team of engineers and mechanics and throughout the season, they swap cars and engineers with the aim of learning the most they can from what the teams have to offer. Each driver gets the opportunity to race on five different circuits around Europe and gain as much championship points as possible. Another interesting and exciting consideration about the W Series is that the drivers that finish within the top twelve of the championship will automatically be given a place on the programme for next year which is undoubtedly a massive motivation factor for the drivers who may be battling for points below the top three. 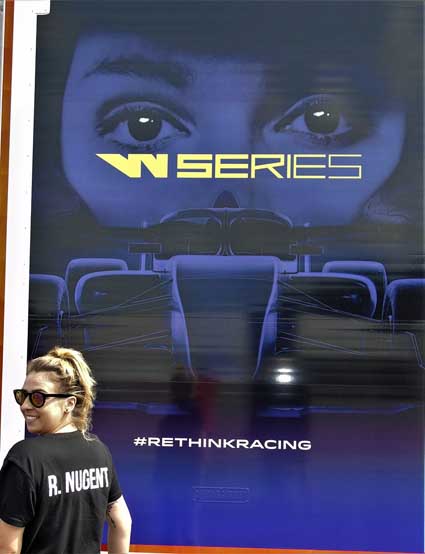 The Final at Brands Hatch

Last weekend along with Emma Dempsey and Aimee Woods from Women in Motorsport Ireland, I travelled to Brands Hatch circuit in the UK for the final race weekend of the W Series. We arrived on the Saturday morning and went to collect our entry passes and were lucky to meet Kellie Baldwinson, the W Series Finance Director who gave us some useful information about where to go and what to see. Although it was a day full of free practices the paddock was lively and the sun was out. We were delighted to see how accessible the W Series paddock was with all the cars laid out neatly under their awnings and the drivers roaming around ready to meet and greet fans. Both free practice sessions showed Kimilainen, Powell and Chadwick as the dominant top three with others such as Koyama, Hawkins, Moore and Visser not far off them in timing. Most drivers seemed satisfied with their times after a wet and a dry session and each driver would give immediate feedback to their engineer as soon as they returned to the paddock.

The next day we woke early and headed back to Brands Hatch as qualifying was on earlier in the day with the final race scheduled for much later in the day. The car parks were already overflowing with spectators and even though it was early morning there was the familiar smell of petrol and fast food to wake everyone up and get the excitement flowing. There was a slight change in the vibe around the W Series paddock on the Sunday with the drivers keeping to themselves and focusing on the qualifying session ahead. Throughout the season the times achieved by drivers in free practice often didn’t appear in the qualifying sessions usually resulting in some surprising top three’s and that is exactly what happened again at Brands Hatch with Esmee Hawkey qualifying P3 behind Powell and Chadwick equalling three British drivers on the front rows! Hawkey, delighted and understandably emotional was seen leaping out of her car to hug her family in celebration of her achievement. There was a few hours until the race so the WIMI team and I decided to watch some of the DTM series races and see what was on show for the afternoon. There was plenty to see and do but even we couldn’t resist watching David Coulthard’s demo run in the Aston Martin Red Bull Racing F1 car driven by Vettel in 2011. It was sensational to hear the V8-engined F1 machinery thunder around the famous British track and to see David Coulthard do some donuts for the fans in the grandstand and continue on to do a sneaky extra lap. I also managed to somehow talk my way into a quick look around the Red Bull Racing team truck and to meet the engineers – thanks for the baseball cap guys!

The final race of the Season

Finally, the afternoon passed and it was time for the final W Series race of the season to begin. We got great front row seats at the stand at the first corner so we had a fantastic view of the start line and paddock hill. It was fantastic to see the stands and all spectator areas packed with people excited to watch this historical race take place. I never would’ve thought I’d see such huge support for an all-female race – it just always seemed illusory to me for this to be possible within my lifetime but here I was, a part of it myself. The energy in the air built up and was released as soon as the commentator announced that the lights were out. In an unfortunate twist in events, Hawkey stalled on the grid leaving Chadwick, Powell and Kimilainen to take the lead in the top three. A few laps in Powell made a bold move on Chadwick up the inside of turn one causing Chadwick to drive wide letting both Powell and Kimilainen ahead of her with Visser hot on their tail. We saw a safety car come out for a few laps which gave us a few minutes to gather ourselves and settle back onto the edge of our seats before the train of cars were let off to begin the fight for positions again. Visser managed to overtake Chadwick, her championship rivalry and Kimilainen fought tooth and nail to get ahead of Powell but as the chequered flag came out it was Powell who took the win and on her own homeground. What a race it was! The racing throughout the whole grid had us engrossed so much we didn’t know where the thirty minutes had gone.

We ran back down to the paddock to watch the drivers come in off track. The raw emotion from them all as they removed their helmets was overwhelming to watch. Most drivers were receiving their final championship points to see where they had come overall and if they had gotten that top twelve finish for next years season. There were tears of happiness and moments of sadness but what really gave me a lump in my throat was the continued mutual support they gave each other in between these mix of emotions surrounding them. It was evident from the first time I stepped into the paddock how well the drivers got along, some even describing the W Series as their “little family” but in a moment where it was all for some and nothing for others, they still remained supportive of one another. To me, that was something so powerful to witness. And dare I say, it was down to the general nature of females combined with the compassion and respect they hold for one another.

We stuck around for the final podium and speeches before getting to celebrate in the W Series HQ and the W Village. Luckily we ran into Catherine Bond, the CEO of W Series who thanked us for travelling over from Ireland and was nothing short of supportive and encouraging to us as female drivers and women in motorsport. Both Alice Powell and Sarah Moore were good enough to give us a few minutes of their time for a quick interview for our vlog and were literally so easy and friendly to talk to. They spoke of all the hard work they had each put into their racing careers and how much competing in this series had already done so much for them in giving them a step in the right direction. Both drivers will be competing in the series again next year and we can’t wait to see how they get on! Hopefully, we will see an Irish driver out on track with them in the coming years.

Ruth Nugent a 25 year old from Gormanston has been volunteering as a Motorsport marshal at Mondello Park in Co. Kildare for nearly 12 years but for 2018 she is moving from marshal to driver and will race in the Fiesta Zetec Championship in 2018. You can follow Ruth on twitter @roothnoogent