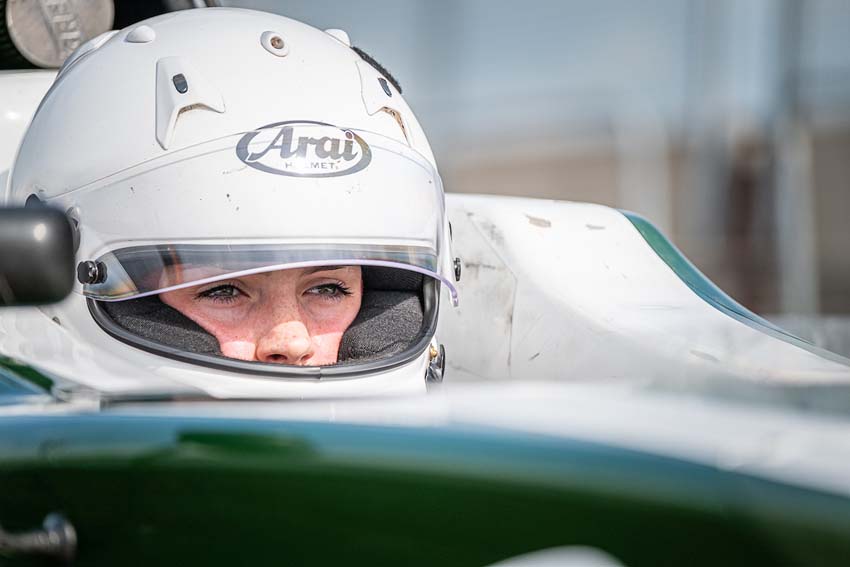 Irish racing driver Alyx Coby achieved a top 5 finish in round 2 of the Danish F4 Championship.

Alyx Coby earned a top 5 finish and her best result to date in her rookie season at round 2 of the Danish F4 Championship at Skurup raceway, Sweden.

Having only seen the track for the first time on Friday and with limited time on track, Coby qualified in 5th position, ensuring her best qualifying to date.

Race one on Saturday got off to a slow start for Coby, who dropped a number of positions on the opening lap. A strong recovery saw her gain back the positions lost to cross the line in 5th position, a career best race result along with improved pace that would have challenged the top 4.

Alyx Coby “I was disappointed with my start, it is definitely an area I need to improve, but I was glad to be able to recover and put my race craft to use and make some good overtakes.”

Race two was shaping up for Coby to reach her first podium based on the reverse grid position and the pace shown the previous day; however, a puncture would lead to a very different outcome. Coby suffered a right front tire puncture on the opening lap of the race which led to an unexpected pit stop. She rejoined the race three laps down and set faster lap times than the rest of the field at that time. Two laps later, suffering with understeer, Coby left the track and made contact with the barrier putting an end to her race.

Alyx Coby “As soon as I left the start line, the car didn’t feel right and I didn’t make any contact either. I almost left the track at turn two because I had no grip and from that point on the feeling got worse and worse so I had to pit. It was bizarre because they were fresh tires so we are not sure what happened. Unfortunately when I went back out, I went off and made contact with the barrier. It was disappointing because I was looking forward to challenging for a podium.”

With little time between race two and three, the FSP crew worked incredibly hard to get the car back together in time but unfortunately missed the starting grid by a couple of minutes. This resulted in a start from pitlane and a deficit of almost six seconds to the back of the pack on the opening lap. Lap by lap the gap reduced as Coby closed in and by the end of the race she advanced three positions to finish 9th.

Alyx Coby “This was a weekend of highs and lows I feel. I am happy that my pace continued to improve and that I managed to close the gap to the top 4 but I really felt in race two if I did not have the puncture, a podium was possible. Unfortunately the results don’t really reflect the progress we made, but hopefully we can convert the progress in the next round in two weeks’ time”

“I want to thank Sven and Alex from FSP racing for all their hard work and effort to get the car back together after Race 2 to get me back out. Thank you to all my supporters especially Paul Sparta (Random Vandals & Vbrick) and Suzanne Campion (Cjj Motorsports)”

With not much time off, Alyx Coby will be back on track at round 3 of the Danish F4 Championship at Jyllandsringen, Denmark on the 25th  and 26th June.

For more information about Alyx Coby, visit: www.alyxcoby.com  or

or following Alyx on Social Media