Home » Diary of a Racing Driver » Jennifer Mullan – Back at Kirkistown 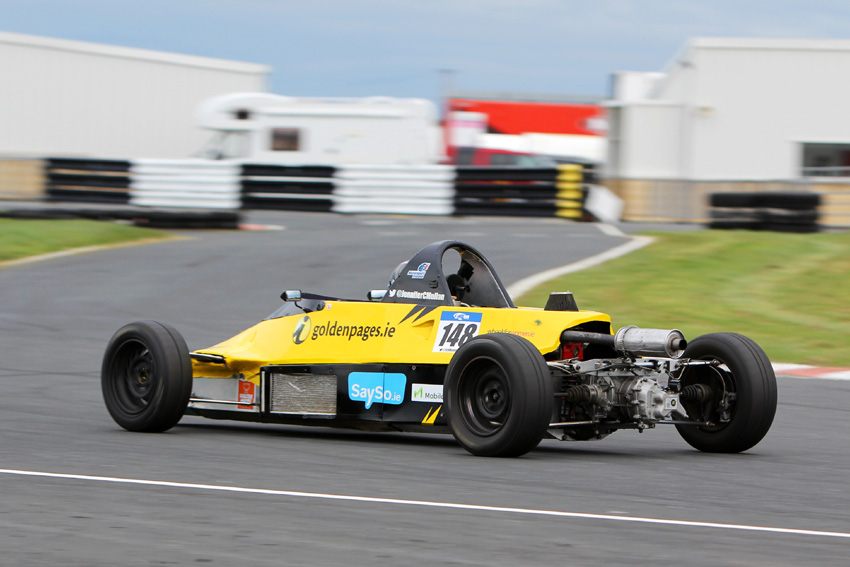 I’m back which can only mean one thing; it’s the racing season again! It feels like forever since I was at the Walter Hayes Trophy back in early November but thankfully I’ve been able to put together a deal to compete in the All Ireland Formula Ford 1600 Championship for this year.  Having won my class in the 2014 Champion of Mondello series, moving on to the All Ireland series was the next logical step. Returning to support me for this year is once again goldenpages.ie joined by fellow FCR Media brands SayHi WIFI and Snap Sync.

The championship got underway last weekend in Kirkistown Co.Down. I had a strong run there last year in the Martin Donnelly Trophy race so I was feeling confident ahead of the weekend.

Over the winter I invested in some new lucky socks but it would appear these are to never be used again, for why I’m about to explain. With everything coming together quite last minute, we didn’t get a chance to shake the car down before Friday and after just one lap of testing I was hit with a freak gearbox failure. Coming down the back straight, shifting from fourth to third gear something broke and the car ground to a halt.  When we got the car back to the pits the team had to spend most of the day cleaning out the gearbox as second gear had broken a tooth and stripped itself. We got it all back together in time for a run at the end of the day but didn’t really manage to achieve anything as we were running in new brake discs. What did become apparent was that we now had a misfire in the engine.

I headed into qualifying a bit raw on Saturday morning after the lack of running the day before. The wind was wild and the sky was starting to darken so it was clear that the early part of qualifying would be key as it was almost certain to rain. After just a few corners it became apparent we hadn’t solved the misfire in the engine and I was really struggling for pace. This would prove to be a bigger problem a few laps later when the bad luck continued, I was struggling to exit the hairpin and another car misjudged the closing speed to me and made contact with the rear of my car. Despite quite a lot of damage to his car there wasn’t a mark on my little Reynard other than the steering was knocked out, I had got away with just a bruised elbow. The team quickly checked the car over and sent me out for the rest of the session but it had started to rain so there was nothing to be achieved from it.

Both races were pretty uneventful really. I was very keen to just get the car home to start off with and anything else was just going to be a bonus. I started 15th in the two races and ended up with a 14th and 12th place finish but more importantly I had secured two third places in the Pre-87 class and my lap times where a lot closer to where they had been last year. Going home with two nice pieces of crystal took some of the sting out of what had been a trying weekend. As the saying goes though, that’s motor racing, you have good weekends and bad weekends, thankfully I have very few bad ones so I just need to dust myself off and start preparing for my home track, Bishopscourt on 9th/10th May.

I need to finish off by saying a massive thanks to each and every member of the FCR Media Racing team, as the effort they put in at the weekend was unreal. I would also like to thank goldenpages.ie, SayHi WIFI, Snap Sync and wheelsforwomen.ie for their continued support. It’s onwards and upwards from here on in.