Home » Diary of a Racing Driver » Jennifer Mullan at Kirkistown 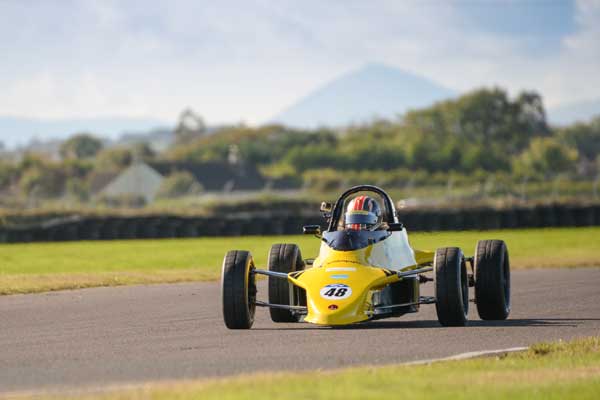 Hey. I’m back again after just two weeks instead of the usual month or so. I’m hoping this won’t be my last blog of the season as I have my sights set on competing at the prestigious Walter Hayes Trophy event in Silverstone at the end of the month. This was looking very likely to happen until the damage that was caused to my car at Mondello last month ate into three quarters of my budget for the UK. We haven’t given up on going just yet, we are trying our best to find the balance so fingers crossed we will be able to sort something. If anyone would like to help feel free to contact me!

All year I was most looking forward to getting up to Kirkistown in County Down to see how I would fair up there. I much prefer the fast flowing track compared to Mondello’s tight twisty nature. No racing takes place at Kirkistown on a Sunday so it was off up the M1 before the birds were up on Friday morning for testing chauffeured by my number one mechanic Sam. It’s safe to say we would have been better to bring a goldenpages.ie sponsored boat rather than a Formula Ford, the rain never let up all day and the circuit was pretty water logged. There wasn’t much to be achieved by testing as Saturday was giving to be dry but the team sent me out anyway to gain some confidence in proper wet conditions and learn the difference in the gear ratios for the faster circuit. Secretly I think they just wanted to laugh at me terrified and soaking wet! The day went well and I have to say I’d almost go as far to say I kind of enjoyed it! There wasn’t much we could do with the car on Friday night until we saw the conditions on Saturday morning so it was off to the clubhouse for a shower and a lovely dinner before heading off to a house we had rented five minutes from the track for the night.

Saturday was race day for the Martin Donnelly Trophy. The rain cleared overnight and the track surface was starting to dry when we arrived. Our qualifying session was the first out and it was a busy enough session with 20 cars fighting for their starting position in the heats. I was drawn for heat two and qualified ninth. It wasn’t ideal trying to learn the car in the dry during a qualifying session but there was no way around it so I just had to get on with it. The top six from each heat went straight through to the final, I finished my heat in eighth so had to compete in the last chance race before the final to see where I would line up for the big race. I had knocked over a second off my qualifying time but was still a bit behind the others so we made a change to the car and went through some data and I improved my times further in the last chance race by another half a second despite struggling with understeer. 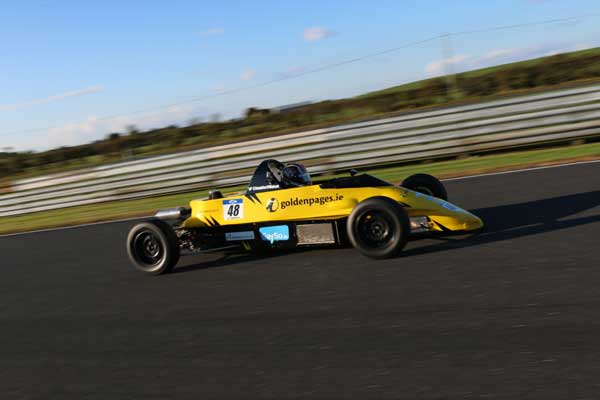 I was starting the final 19th and it was a case of go hard or go home. It was the last race of the day and possibly the last race of my season so I was prepared to give it everything to end on a high. We made quite a big change to the car for the final and I wasn’t sure how it was going to feel, but it transformed the car and I found that when the race got underway I was straight away more comfortable and sticking with the pack and trying to find my way past the others in front. I ended up locked in battle with Paul McMorran in his gorgeous Crossle for the entire race. It may have ended up being the battle for 14th place, but we raced each other hard and fair for the entire 18 laps and when the chequered flag came out it felt like I had won the race just by coming out on top of our battle. After the race I went looking for Paul to say thanks for such a great race and in the meantime he had gone looking for me to say the same, the sportsmanship shown was great to be a part of. I was overwhelmed by the amount of congratulations and kind messages I got after the race as at the end of the day it was a fight well down the field but everyone recognised how far I had come on during the day. I actually don’t think I have ever enjoyed a race so much and to add to it I also brought home a lovely award for third in the Pre 87 class.

It’s back down to earth now though and as I said at the start the mammoth task to get to the Walter Hayes continues but I am not one to give up so watch this space to see what we manage to come up with! As ever I have to thank my super team FCR Media Racing of Bernard, Paul, Sam, David and Nathan for all their hard work and patience and goldenpages.ie, MobileReady.ie and SaySo.ie for their support this season. It’s been fantastic and I really feel like the luckiest person around which is due to them giving me the opportunity to do what I love.