Home » From Marshal to Driver » Mondello Rallycross with Ruth Nugent 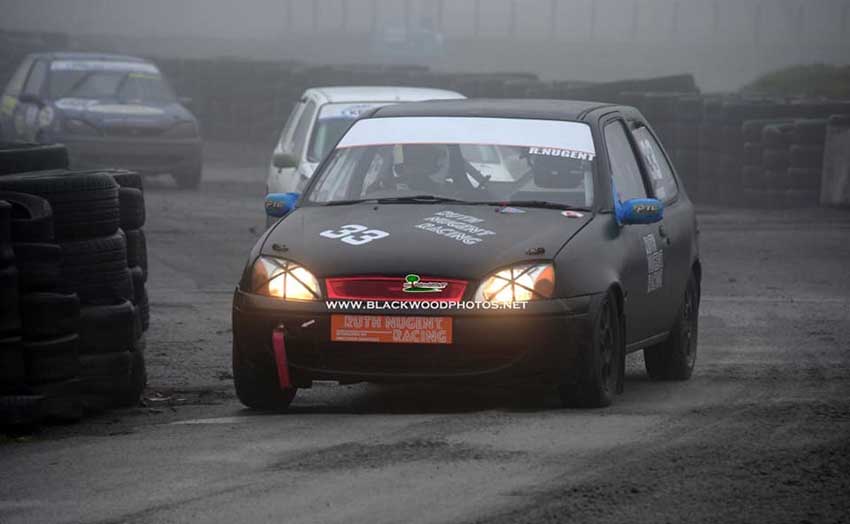 Firstly, apologies for being so M.I.A.  Between health issues and mechanical issues with the car the end of the racing season was very busy.

But luckily myself and Freddie the Fiesta are back in action and feeling good! So to celebrate that we threw an entry into the last rounds of the Irish Rallycross Fiesta championship in Mondello Park on the 24th of November. Rallycross in Mondello was the first form of Motorsport I ever marshalled at with my Dad back in 2006 and I fell in love pretty much straight away. Back then Rallycross in Ireland was in its prime days with the likes of John Mc Clusky, Helmut Holfeld, George Tracey and Dermot Carnegie racing in Supercars and I would love working at the corner of Rallycross 1 in Mondello Park because that was where they would all do donuts on the mixed surface at the end of the event! I plagued Dad with questions about the cars and the driving and begged him to let me go racing completely oblivious to the costs behind it all.

Coilin Clinton from Clinton Motorsport got to work on preparing the car. We had already begun repairs to the damaged panelling from the season so had to do a very last minute paint job (€10 worth of spray paint from Dealz if I’m being honest!) and add some mudguards and functioning headlights and we were good to go. The car passed through scrutiny with no issues and we got ready for the day ahead. I was excited heading out for my practice laps – I had no idea what to expect as the track was cold and very wet. The car felt great and I knew the day was going to be all trial and error and so I went into it with no expectations of myself. Team Farasbarr (Fiesta RX regulars David Maher and Niall Maher) came along to help myself and Oisin Keane out and give plenty of valuable advice which was greatly appreciated.

The first heat I jump-started so was red-flagged and put to the back of the grid. My inexperience in Rallycross shone through straight away as I went as the lights went out when I was supposed to go when the green light came on – woops! The second heat was probably my favourite. I felt a lot more confident with throwing the car into the mixed surface corners and remembering to “keep the shoe in” as everyone kept saying. I led the race up until the last lap where I was to take my joker lap and made a mistake but finished with a comfortable 3rd place. It was my first time ever leading a race and I loved the feeling! The last heat before the finals was going fairly well with close battles until I lost control coming into Rallycross 3 and spun out narrowly missing the tyre wall. Lots of saves and lots of lessons learned already. The finals were run in the dark so this was the only race I felt a little nervous about. There were ten of us on the grid and I started P6. There was a very messy start coming into turn one with a few people clashing and spinning off which I managed to avoid but I lost time from it. I felt like I was very hesitant with corners due to poor visibility however I was surprised to finish the race in fifth place and second fastest overall after the leader. I made plenty of mistakes and Freddie the Fiesta took plenty of beatings but it was the most fun I’ve had in the car all year – I loved every minute of it! The IRX crew and marshals were so supportive and helpful throughout the day so shoutout to them!

I’m taking part in the RSA rallysprint in Mondello this coming Sunday 8th and that will also be a first for me and the Fiesta so I’m looking forward to yet another challenge and more fun which is what it’s all about. If there’s anything I’d like to pass on to everyone it’s just a reminder to enjoy what you’re doing – if you’re putting all your time and money into a sport/hobby make sure you’re not getting distracted by politics, drama or any other possible problems and go back to the basics and remember why you’re doing it – for you and for fun.

I’m not 100% sure yet what I’m going to do in 2020 but the Fiesta is being handed to Precision Tinting & Graphics for a new look over the Winter so that’ll tell you I’ll be definitely doing something!

Ruth Nugent from Gormanston volunteered as a Motorsport marshal at Mondello Park in Co. Kildare for nearly 12 years but in 2018 she moved from marshal to driver and competed in the Fiesta Zetec Championship. Today she is a Racing Driver, Cyclist and is still a Motorsport Marshal. You can follow Ruth on twitter @roothnoogent

From Marshal to Driver – February 2019